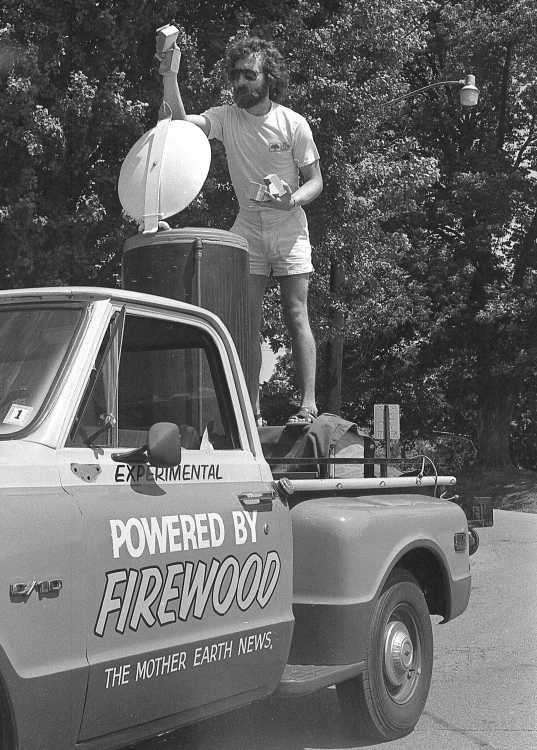 Cape Girardeau native John Vogel has been touring the country recently in a truck he helped design which runs on scrap wood. Here, Vogel, who is a researcher for the Mother Earth News magazine, tops up his tank while in Cape Girardeau for a visit with his parents, the Raymond Vogels.

Truck 'beats all,' including cost

John Vogel doesn't buy much fuel for the 1970 Chevrolet pickup he drives. He knows a lot of people who are willing to give it to him for free. In fact, they're happy to get rid of the stuff.

You see, the pickup, designed by Vogel and other researchers at the Mother Earth News magazine, runs on scrap wood.

That's right, wood. Every 100 miles or so Vogel, a Cape Girardeau native who now lives in North Carolina, stops by the nearest saw mill or lumber yard and picks up a couple of hundred pounds of wood scraps to top up his tank.

"Well what kind of wood would you like, sir?" an employee at a lumber yard asked Vogel on a recent trip.

"I want some with a lot of knots in it because the knots burn slower," was the reply.

"Well, if that don't beat all," the worker said. "I've had lots of requests for wood. But nobody's ever asked for wood with knots in it."

Vogel, who has been touring the country with the wood-fueled vehicle, has been confronted with quite a few "if that don't beat all" looks and comments from people all over. Seems they just don't believe an automobile can run on wood and wood alone. Some have even gone so far as to say it can't be true.

So, to quiet the skeptics, designers of the vehicle recently installed a valve on the exhaust pipes which periodically lets off steam. And, low and behold, the steam smells just like the pleasing aroma of a hickory barbecue.

The valve isn't necessary to keep the vehicle operating. However, it does tend to prove that the truck is burning wood instead of gasoline, Vogel says.

"We ought to get some kind of a cut from the fast-food chains for all of the people behind us on the road who pull over to have a (hamburger)," he says.

However, subliminal suggestion is not the purpose of the awkward-looking vehicle. Nor is the truck intended to be the prototype which will eventually put Standard Oil and Gulf out of business.

Instead, the contraption is designed to be a sort of traveling energy exhibit which demonstrates the simplicity and low cost of homemade energy conservation devices such as wood-burning stoves and solar heat catching boxes.

"What I'm trying to do is de-mystify the technology," Vogel says. "We want people to realize that it doesn't take an Exxon lab technician with $4 million to build some of these things. It can really be done at home with low bucks."

For the past several months, Vogel, whose parents, the Raymond Vogels, reside in Cape Girardeau, has been traveling throughout the Southwestern United States in the wood-fueled truck speaking to groups about low-cost energy-saving techniques.

The device which powers the truck was designed primarily as a source of home power and heat, rather than as a source of power for vehicles--its bulk makes it impractical for use in the family car or truck. "Honda Civics need not even apply," Vogel says.

The power device, which Vogel says can be built for less than $300, is fashioned from a discarded hot-water heater, a cast-iron frying pan, an old tire rim, a few wires and a little metal tubing.

It would take a biochemist such as Vogel to explain exactly how the thing works. But here's a layman's over-simplified stab at it:

The vehicle is started with conventional fuel and the wood-burning device is switched on from inside the vehicle after it reaches a steady speed on the highway. A fire inside the hot-water heater builds to an intense level of more than 2,000 degrees, creating a propane-like gas that is released into the engine. That's about it.

According to Vogel, the truck can travel up to 90 miles per hour on "smoke alone." On a 100-mile trip the vehicle will burn about as much wood as can be contained in a 55-gallon drum.

"Right now gas costs for a truck like this are 10 to 12 cents a mile," Vogel explains. "Say you're paying the outrageous price of $75 a cord for wood. That would average out to less than three cents per mile to run this vehicle.

In addition to cost, Vogel points out the device has other advantages. He says the contraption creates little waste--only a couple quarts per 55-gallon drum of wood. He added that the device releases no pollution, using most of the smoke it creates. Potentially harmful contaminants are removed through a system of filters.

Vogel and other Mother Earth News officials last fall had the opportunity to show off their creation in a coast-to-coast race sponsored by an auto club. Involved in the race were vehicles powered by any substance other than petroleum.

The Mother Earth truck came in first in the race, which was run from Los Angeles to New York.

Among the vehicles which finished behind the truck was an automobile powered by Kentucky Fried chicken oil and another that was fueled by alcohol manufactured from Little Debbie's cupcake wrappers.

Cars that run on chicken oil and cupcake wrappers? Well, if that don't beat all.