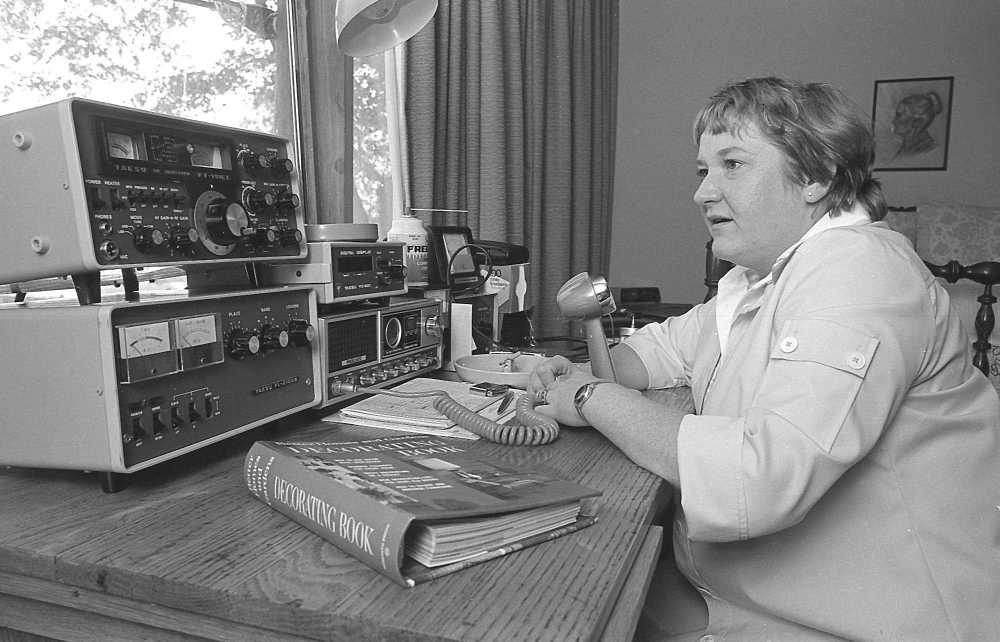 To say that June Bug likes to modulate with 18-wheelers while they double nickel along the highway is, to say the least, a Big 10-4.

Translated, that means that Mrs. Martha Vandivort likes to spend a lot of her spare time talking with the drivers of those huge tractor-trailers as they travel along the roads, presumably at 55 miles per hour. Ask Mrs. Vandivort, a citizens band radio buff for about 10 years, and she'll more than likely say that's a Big 10-4--or that she really agrees.

Mrs. Vandivort, who resides on a farm near here with her husband, Sam, says she first became involved with the workings of citizens band when showing horses at the Southeast Missouri District Fair here. "One thing led to another," she continued, and before she knew it she had a base station and a "handle," June Bug, because her birthday is in June. Most of her CB friends now know her as "J.B." Mr. Vandivort's handle is, appropriately, "Uncle Sam."

An admitted night owl, Mrs. Vandivort spends several hours a night at her base station, which overlooks a rolling pasture. She leaves the radio on all night; she says, always alert for a call for assistance from truckers, who spend long hours on the road at night.

"I talk to people all over," she stated. Among her regular CB buddies is a St. Louis truck driver who heads for home at about 3:30 a.m. after working the night shift at General Motors, several of the personnel at Blytheville Air Force Base, an invalid who lives near Shawnee National Forest in southern Illinois, and a Dexter quadra-paraplegic, "Sonny," injured in a hunting accident nearly 20 years ago.

Although she may know "when somebody's kid had measles and mumps," oftentimes CBers know contacts only by their "handles."

Women are into CB radio more now than ever, she says, noting that they may discuss such things as recipes or sewing hints on the airwaves. Last Christmas, Mrs.Vandivort says she put out a "call for help. I needed to know how to keep my divinity from turning to glue." She got her answer.

The base station Mrs. Vandivort has at her home and the CB outfit in her car are completely individual things, but she says she "wouldn't go anywhere without my car CB. I know when I'm out there, I feel safe and secure."

Once, when she had a flat tire and radioed for assistance, a truck driver who had heard her call "just pulled up behind me and waited until help came," she says. "Truck drivers are the greatest people in the world when it comes to helping people."

Mrs. Vandivort also has her ham radio license, logs both ham and CB calls, and is working toward a goal of obtaining a commercial license.

During the course of a night, Mrs. Vandivort talks with between 20 and 30 people. Over the years, she has conversed with hundreds. When trucks break down, she often hears their call and in turn notifies truck terminals of the difficulties. "I've found many a spare tire in the middle of the night," she added.

There is an almost musical rhythm to the voice of a dedicated CBer. "I was very shy when I first started with CB," Mrs. Vandivort reveals. That shyness is gone now, and she finds making new CB friends a pleasure.

The popular notion that truck drivers are constantly looking for "Smokey," trying to outwit the highway patrol is a misconception, she emphasizes. "Truck drivers couldn't be happier with the patrol," she says. "The drivers know the job the patrol does, and vice versa. They have a lot of respect for the troopers."

It's the "four-wheelers" (cars) that are them Smokey watchers, she said. Two patrolmen with whom truckers especially enjoy trading CB time with are "Lonesome George," who works out of the Perryville area, and "Mystery Man."

"Lonesome George has given stranded travelers money out of his own pocket to help them home," she says. "And Mystery Man got his handle because he's a genius at getting in a group of people almost before they know he's there."

Some of the truck drivers among Mrs. Vandivort's CB contacts have had strange cargoes, indeed. Forty-eight thousand pounds of glue, for example. Or 40,000 pounds of duck's feet, considered a delicacy in China and hauled from the East coast to the West coast for shipping.

Mrs. Vandivort says her best friend is a woman truck driver who drives with her husband. She met Mr. and Mrs. Gene Joslin about nine years ago on Christmas Day. "They were coming into Cape Girardeau, and I got them on the CB. I'd cooked a big Christmas dinner, so I hollered at them to come on out. They did, and we've been friends ever since."

The "old-timers," or people who have been CB fans long before the current craze took hold, are the most friendly and outgoing, Mrs. Vandivort stated. Some of those operate the nearly 20 million CB radios on the air, and exclusively use Channel 19, the national highway frequency, interested only in road conditions and whereabouts of "countie mounties" and "prowling bears."

"I hate the Smokey attitudes," Mrs. Vandivort said. "But the funny thing is, drivers on the lookout for the patrol miss about 90 per cent of them."

Too, veteran CBers use standard language and not as much jargon as the newer buffs. "Some things are more interesting if you use CB language, though," she added. "Gateway is a lot more interesting than St. Louis."

Well-versed in the rules and regulations set down for CB users by "Uncle Charlie," the Federal Communications Commission, Mrs. Vandivort does not like to see the popular pastime abused. She works part time at a CB radio outlet here.

Citizens band radio is a perfect vehicle for making new friends and for learning a lot about people, Mrs. Vandivort emphasized. So when June Bug gets on her CB, it's a sure guess she'll be "on the side" (standing by and listening) to share thoughts with others. And there's little doubt she'll continue her interest in CB for years to come before it's time to say "8's and other good numbers." So long and signing off.