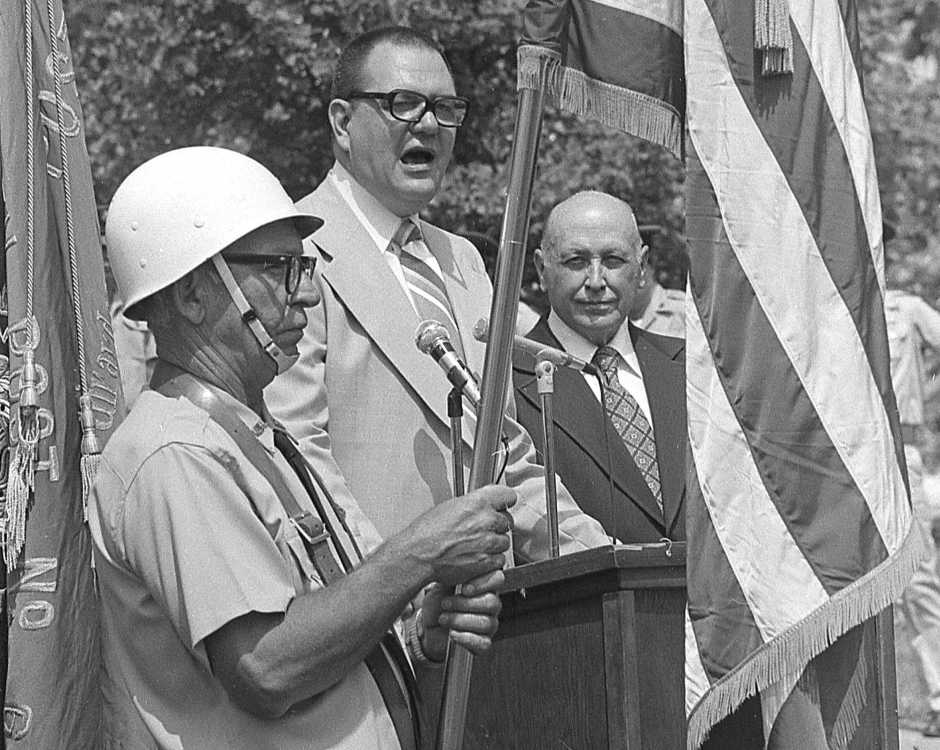 A total of nearly 500 people attending Memorial Day services in Cape Girardeau and Jackson, heard former state Sen. Albert M. Spradling Jr. speak on the history of Memorial Day in the Cape Girardeau service, and the Rev. Lloyd Bollinger talk about the day as an "inspiration to freedom-loving people everywhere" in Jackson.

Approximately 300 people attended the annual Joint Veterans Council Memorial Day services Monday in Memorial Park, a day described by Sen. Spradling as "a little hot and steamy." "We had a darn good crowd," he said.

Sen. Spradling said the observance of Memorial Day as a holiday began in the South when women placed flowers on the graves of both Union and Confederate soldiers. It grew to a nationwide observance but the day, May 30, remained the same.

The Cape Girardeau Municipal Band opened the program with a half-hour concert, followed by the Veterans of Foreign Wars Color Guard posting the flag. David Barks, chairman of the Joint Veterans Council, presented the color guard.

The invocation and benediction were given by the Rev. Anthony Jordan, pastor of the Jackson First Baptist Church, and Mayor Howard C. Tooke introduced Sen. Spradling.

A moment of silence, followed by a 21-gun salute, was held in honor of the war dead. The salute was given by the Headquarters Company 135th Engineer Group of the Missouri National Guard. The gun salute caused the only real flurry in the day's proceedings when the "peacocks in the background crowed a little bit" as the guns fired, according to Sen. Spradling.

In Jackson the Rev. Bollinger, pastor of United Methodist Churches in the Millersville-Oak Ridge area, delivered the address at services sponsored by American Legion Altenthal-Joerns Post 158. The Rev. Bollinger spoke of his experiences and the sacrifices that veterans had made for the country. "No nation ever became great without hard work, intelligent planning and worthy sacrifice," he said.

The Rev. Bollinger estimated between 150 and 200 people attended the services.

The Jackson Chiefs Band, under the direction of Nick Leist, played two selections at the service, which was held at the entrance to Jackson City Cemetery. Milton Nitsch was in charge of the Color Guard and the invocation and benediction were given by the Rev. E.D. Francis, pastor of the Burfordville Baptist Church.