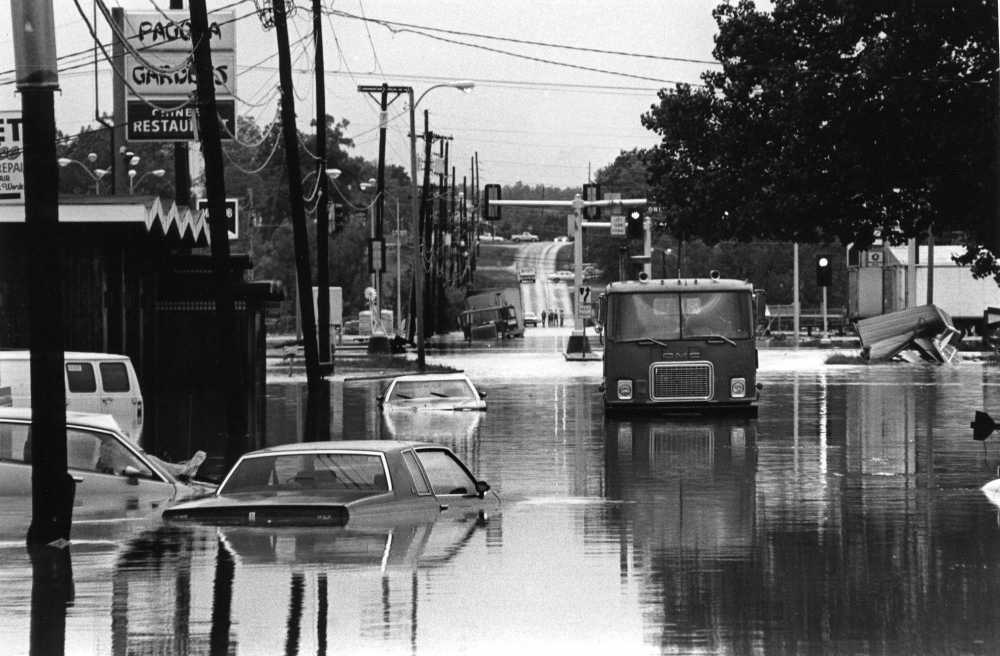 On May 15, 1986, flash flood waters from Cape LaCroix Creek spilled over the roadway and vehicles at the Kingshighway and Independence intersection, remaining the next day when this photo was taken. (Mark Sterkel photo)

By Mark Bliss and Peggy Scott

May 15, 1986 brought up to 10 inches of rain to some parts of Cape Girardeau, crippling the city for days.

As businesses and residents struggled with a massive cleanup operation, city officials and community leaders launched a campaign to help control flooding in the future.

Reflecting on the one-year anniversary of the flood, city officials and community leaders said the flood created a new awareness as to the seriousness of the community's storm water problem. No longer could the storm water problem be viewed as just a west side problem.

"We can't have a blighted section right down through the middle of Cape," said Mayor Gene Rhodes.

Robert Hendrix, president of the Cape Girardeau Chamber of Commerce, said at least five businesses either closed or left town following the flood. Many others were forced to spend money to protect themselves from rising water.

"The major impact of the flood is that the area that's affected has not grown--that area being the very center of our community," he said.

"All of a sudden people realized our community was cut right in half. Certain parts of our community couldn't get ambulances, firetrucks or police. One of our hospitals was isolated. We had water running down the city's main thoroughfare, Kingshighway.

"There's no way to put a dollar figure to the negative image the flood has had on our community," Hendrix said.

"People realize flooding is a major impediment to the growth of our community," Hendrix said. In the chamber's recent membership survey, flooding was listed as one of the top three problems in the community.

Flood waters caused significant damage not only to businesses and homes, but the municipal government as well. "It cost the city a lot of money in lost equipment and parts in the city garage," Rhodes said.

"The water reached heights it never reached before from a lesser amount of rain. It proved to us the situation was getting worse, and unless we do something immediately it will continue to get even worse."

While flooding remains a serious problem, Rhodes said the city, the Cape LaCroix/Walker Creek Levee District and the business community have been working together to solve the problem.

One example is the cooperative effort for channel improvements on the lower reaches of Cape LaCroix Creek south of Bloomfield Road. The project will be funded with private money.

A fund drive by west end merchants and levee district officials has netted about $755,000 in contributions. However, City Manager Gary A. Eide said the city has only received about $55,000 in actual cash contributions at this time.

He noted the city will have to have sufficient contributions to cover the cost of the project.

The city is currently advertising for bids and will open bids on May 29.

Charles Haubold, who spearheaded the drive, said it is conceivable that work on the creek bed could begin three weeks from now.

In that three weeks, the levee district must secure financing before work could begin.

"The flood is something that you try to put in the back of your mind. But it's very real and very dangerous. It could ruin a lot of people's lives," said Haubold.

"I think it woke a lot of people up. You can talk about it. It may go away, but it will come back," he added. "People know it's a very serious situation. Unless something is done, the problem is still there."

The project has taken a year, Hendrix said, due to the number of permits required. "We probably would not be this far along without the flood. That's the thing that really gave us the impetus to get something done."

Both Eide and Rhodes said city officials since last May have been attacking the flood problem on a number of fronts.

Within weeks after the flood, the City Council, through the efforts of the city staff, put together a $3.3 million flood control bond issue proposal.

But the measure, which would have financed construction of a water retention reservoir along the northern reaches of Cape LaCroix Creek, was rejected by voters in an election last August.

Despite that, city officials have moved ahead with two other flood control projects.

City and levee district officials have encouraged the Army Corps of Engineers to push ahead with plans for a $28.5 million federal flood control project along Cape LaCroix and Walker creeks.

The federal project has been in the planning stages for years. Congress has authorized the project, but no appropriation has been approved.

The planning process could take 12 to 18 months to complete. Funding is not expected until the 1990-91 fiscal year. Construction could begin in 1991, Corps officials have indicated.

The Corps project would involve a local share of $8.85 million, of which $1.65 million would be a cash contribution. A key part of the project on the upper reaches of Cape LaCroix Creek would be construction of a dry retention reservoir.

The other main project has been the development of storm water management regulations to assure that new residential and commercial developments don't increase the storm water problem.

A proposed ordinance, which would require all new residential and commercial developments to have storm water retention basins or other facilities to control storm water run-off, is slated for first reading at Monday night's City Council meeting.

Rhodes said he believes the community's efforts to tackle the flood problem "could help speed the (Corps) project up to some degree."

"When we get both sections (of Cape LaCroix Creek) done," Hendrix said, "hopefully we will be out of the flood business.

"We're holding our breath, and hoping we don't have another major rainstorm until the project down south is under way."

The mayor noted that the city may also have to look at construction of other water retention facilities north of the city to help solve the flooding problem.

In addition, Rhodes said, consideration might be given to implementing a flood control project patterned after the one in Scottsdale, Arizona. That project involved the development of a "green belt" for parks and recreational use in a flood plain area.

Rhodes expressed confidence that Cape Girardeau's flooding problem will be solved. "There is no question about it in my mind that it will be resolved in the future."

A group of prominent Cape Girardeau businesses, with the support of U.S. Rep. Bill Emerson, organized a cooperative effort with the city and county government to go to Congress to authorize a major flood-control project that would hopefully keep the water in its banks and out of their buildings.

Congress agreed and put the U.S. Army Corps of Engineers on it. Construction wouldn't begin for 10 years and it would take another 11 until it was finished. The $48 million project would be mostly paid for with federal dollars but did require a 25 percent match from the city. City residents passed a 10-year, quarter-cent tax to come up with its share.

The corps started building the watershed infrastructure in 1996. The project included a huge detention structure north of town and was dedicated in the spring of 2004, though it began protecting from flash flooding a few years before that.

Read more in this story published 25 years after the flood:

Fast and furious: May 1986 saw most costly, damaging flash flood in Cape history