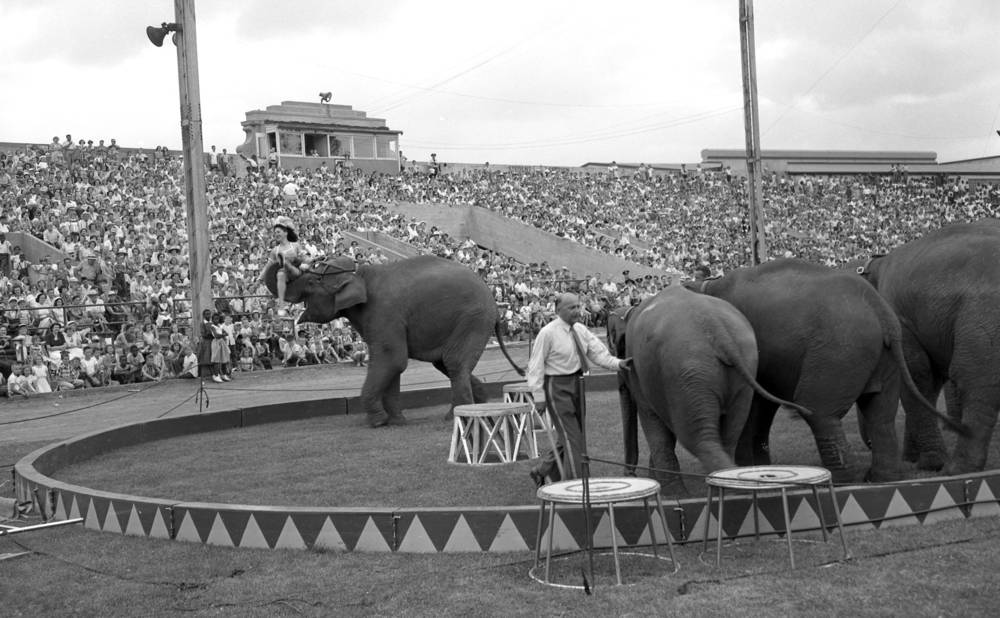 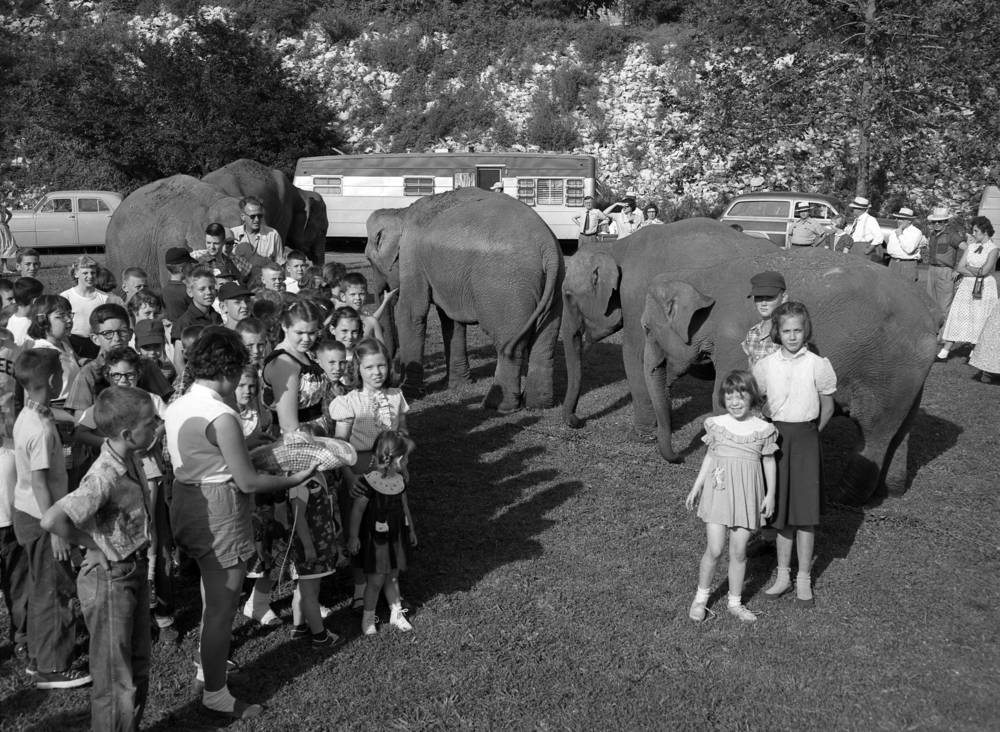 Two capacity crowds--the official ticket count showed 9274, the greatest number of people ever to see a single entertainment feature in Cape Girardeau history--laughed and thrilled, applauded and sat with bated breath at the panorama of color and action spread before them Monday at The Missourian's Golden Anniversary Circus at Houck Stadium.

There appeared little to choose between the size of the two crowds, although because children are smaller it appears probable a final check of attendance may show more people attended the afternoon performance. That was the kids feature, and they loved it. But no less enthusiastic was the throng of adults who poured into the stadium for the night show.

Veterans with the show, those who have seen it in action throughout the United States, said it had never shown in a more beautiful setting than that afforded by Houck Stadium with the greenery of trees and the high limestone bluff as a background for the performance. The turf on the field set off the bright colors of circus paraphernalia to its greatest advantage.

It wasn't a complaint, but there was the lament from the crowd that there was just too much to see and not enough eyes to view it all. Three and four acts went on at once in some instances and applause for one group kept those elsewhere turning their heads trying to see everything at once.

Actually, the fun started before the circus proper was put underway with an opening overture by the band and the singing of the National Anthem by Miss Deane Chapin. This was because the clowns were out on the running track in front of the stands doing their side-splitting stunts. They kept things moving long before the starting fanfare.

There were two unscheduled situations during the circus, one in the afternoon, the other at night. The first of these occurred at the conclusion of the spectacular act by the Olympic Bears, initial performance on the program. A huge black bear refused to go into its cage, despite whip cracking, bribes of sweets and sweat. Finally the animal was roped and pulled into the cage.

Miss Charlotte Walsh, who put the animals through their paces, said the animal was afraid of another bear in the act which was in a nearby cage. Another factor was a three-hour breakdown of the truck before arrival here and a tight schedule. This combination made the animal stubborn. She did not show it at the night performance, she said, because there was no time between shows to work with the animal.

The crowd sat quietly while the big animal was unfastened from the hitch joining the other animals. Once on its feet again, the horse was ready to go. But throughout the fine big animals slipped, and then the performers found the going slick as they jumped on the bare backs. Afterward, Alberto Zoppe said the ring was not properly placed and caused crowding among the animals. They are used to performing in sawdust instead of on turf, he said. Dew had begun to settle on the grass which also made it slick going for the performers.

All acts were spectacular, and some favored one while others liked something else. All, however, liked the Sky Devils, who performed on a 115-foot high structure, ending with a hand stand atop a swaying pole.

Chester "Bobo" Barnett, a clown who somehow crammed his 200 pound, six-foot-plus frame into a tiny automobile along with an average size suitcase, two dogs and a live skunk, was a huge favorite. His trumpet playing and dog act added to the act.

The Great Arturo Family, comics as well as serious artists on the high wire, were another crowd pleaser as they performed high above the ground on the tight strand without benefit of a net.

Masters of the flying trapeze, the internationally known Flying Zacchinis, who perform form the trapeze when not being shot from guns, and the Flying La Vals, put on a masterful performance on two sets of swinging trapeze.

Jack Joyce's performing camels worked in unison in the center ring in a performance that had the audience agreeing with the billing that it was a rare achievement in animal schooling. They are the only performing camels in the United States.

As spectacular as anything seen during the circus was the performance put on by the Swedish stars, Ernst and Lola Rhodin atop a 90-foot tower on a balancing platform. They received a great welcome in their first American appearance. She did trapeze stunts with nothing beneath her while he provided the balance from the opposite end of the platform. At the end they spun in a circle while, at the night show, fireworks made the spinning platform a giant pinwheel high in the air.

The circus closed with a display of both aerial and ground fireworks.