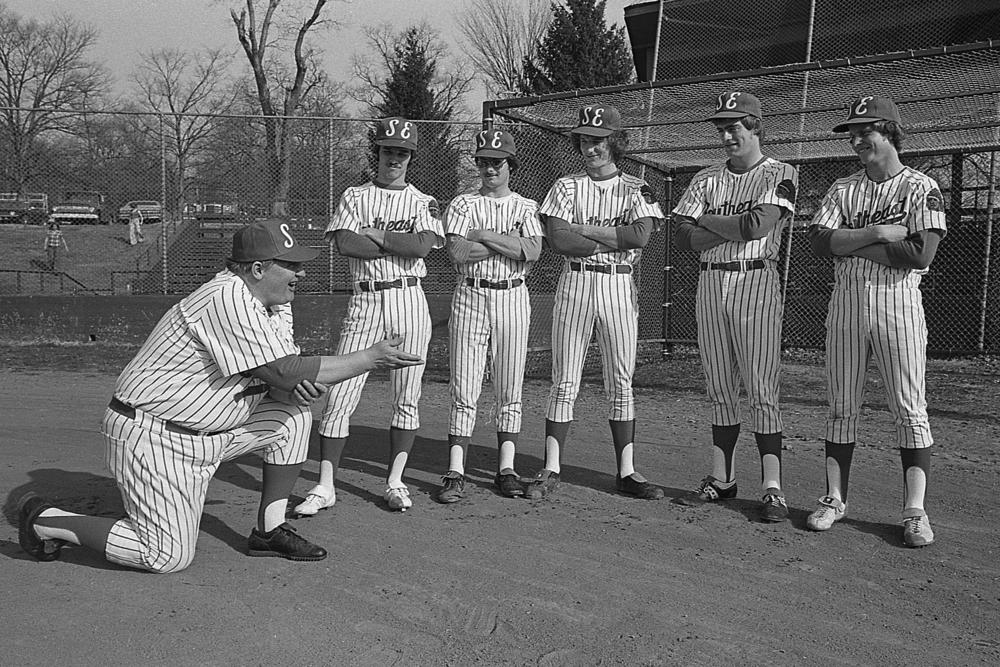 Coach Joe Uhls, veteran head coach of the SEMO State baseball Indians, talks with a group of veteran pitchers during a break in drills at Capaha Park. The Indians open the season Friday against Memphis CBC, with a doubleheader, scheduled to start at 1 p.m. Above, from left: Trae Hastings, Mark Doerr, Jeff Hunt, Don Buechting and Terry Bazzel. Bazel was on red-shirt status last year. Below, Coach Uhls talks with an umpire during a game. (Fred Lynch photos) 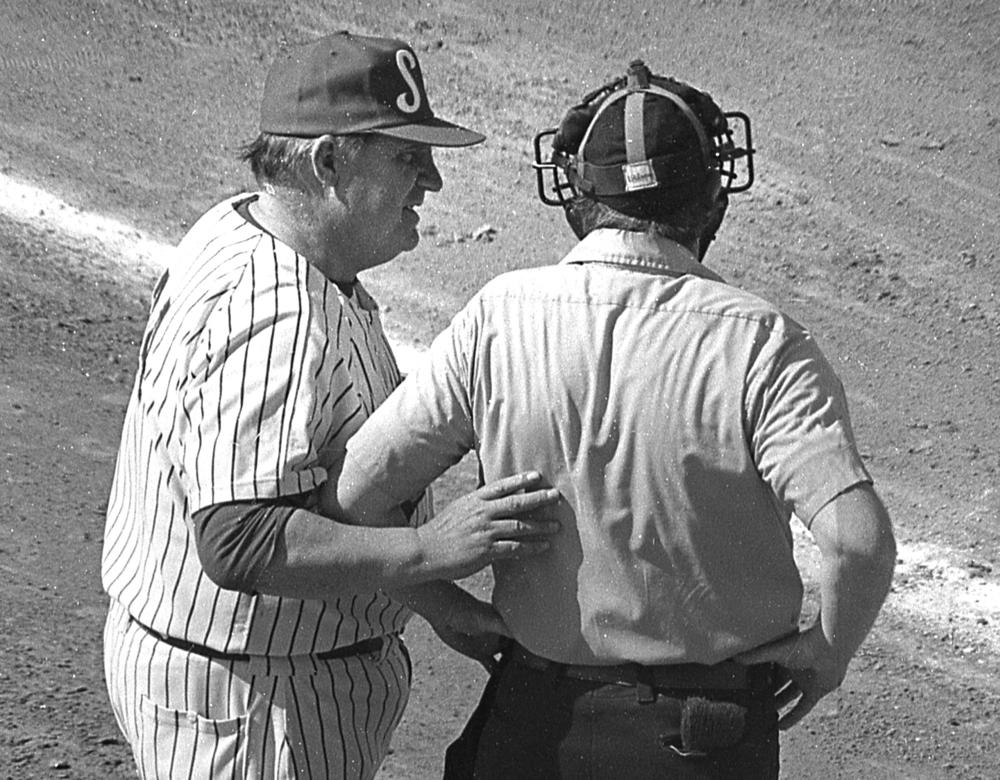 Uhls steps down as SEMO coach

In the spring of the upcoming season, a SEMO State baseball team will take to the field without Joe Uhls at the helm of the team for the first time since 1960.

A name that has become synonymous with the Indians baseball program, Uhls announced Tuesday that he will step down from the top position and give way to a new face.

"I'm 65 years old and I just figured that it was time to lessen some of the responsibilities and the stresses on me that come with the job," said Uhls.

That is not to say, however, that Uhls, who has been with the SEMO State coaching staffs for 35 years, will not continue on with his coaching career.

Rather than being the No. 1 man, Uhls will assume the role of hitting instructor or strength coach, depending on what arrangements can be made when a new leader is hired.

It has been a long, glorious stint in Cape Girardeau for Uhls that started upon his graduation from the university in 1949 when a baseball program didn't even exist.

Uhls began his coaching days as the College High's coach, and after spending 10 years at that position, he moved over to the university to become assistant basketball coach, even after taking the head job in the new baseball program, until 1970.

One would have expected in that long of a stint for Uhls' statistics to be impressive, and they are.

With the end of his term, Uhls owns 373 wins, 256 losses and five ties including 18 winning seasons (13 of the last 14), three MIAA championships, has competed in the NCAA regionals four years, won the regional title and finished third in the nation in Division II in 1976.

"There has been plenty of good memories along the way and so many exciting games to remember, but if I had to point to one game that stood out, it would have to be the time we won the regional game in 1976," said Uhls. "It was held in St. Louis that year and we beat the University of Nebraska-Omaha, and just that feeling of knowing that we were going to the finals had to be the biggest thrill I've had."

The Indians earned a 2-2 mark in the national finals that season to claim third in the nation with the likes of a team that Uhls recalls as one of the strongest.

Three members of the team that year went on to become All-Americans including the likes of shortstop/pitcher Dan Weiser, pitcher Trae Hastings and outfielder Mark Amick.

A total of 11 ballplayers have gone on to sign professional contracts after playing out their stints with SEMO State, but none have attained higher than the Triple A ranking.

One of the remaining players to have a shot at giving Uhls his first big-league player will be Steve Williams who signed with the Philadelphia Phillies this summer after four years with the Indians.

"I've played for him for the last four years, and I knew him a lot longer before then, and he knows just about as much about baseball as anybody if not more," said Williams. "He is a more of a one-to-one coach instead of just telling the whole team what to do.

"He would take you aside and show you what to do. I know that he really helped me a lot in refining my swing and getting my timing down."

Uhls has seen several changes since his early coaching including the advent of aluminum bats and the designated hitter rule, but one area that is widely accepted today and was always a first with Uhls was in weight training.

"We always had it when I started at College High, and at that time there were very few schools, if any, that had that sort of a program," he said. "But we've always run it because we never had a real big scholarship program and had to rely more on developing our players into good ones."

Taking a long look back on his distinguished career, Uhls does consider himself lucky and would not change any part of his experiences.

"I've made many good friends and have gotten to know hundreds of players that went through here," he surmised. "I figure I'm lucky because I had the kind of employment that I wanted and that was suited just for me."

Joe Uhls went on to assist the next head coach, Palmer Muench, for three baseball seasons as a hitting instructor and strength coach.

At a retirement dinner for Uhls in March of 1985, he said, "I've enjoyed being a teacher and coach. It's a wonderful profession. You get to meet a lot of people and influence a lot of lives."

"What I think of Joe is that he was always ahead of his time," said Bess. "He always had time for the average person and he always made you feel better as a person.

"He probably had a greater impact on me than any other man in athletics."

In 2002, Uhls was named to the inaugural Athletic Hall of Fame at Southeast Missouri State University. The "Tiger" Joe Uhls Baseball Locker Room at Houck Field House is named in his honor.