Recycling to the last straw 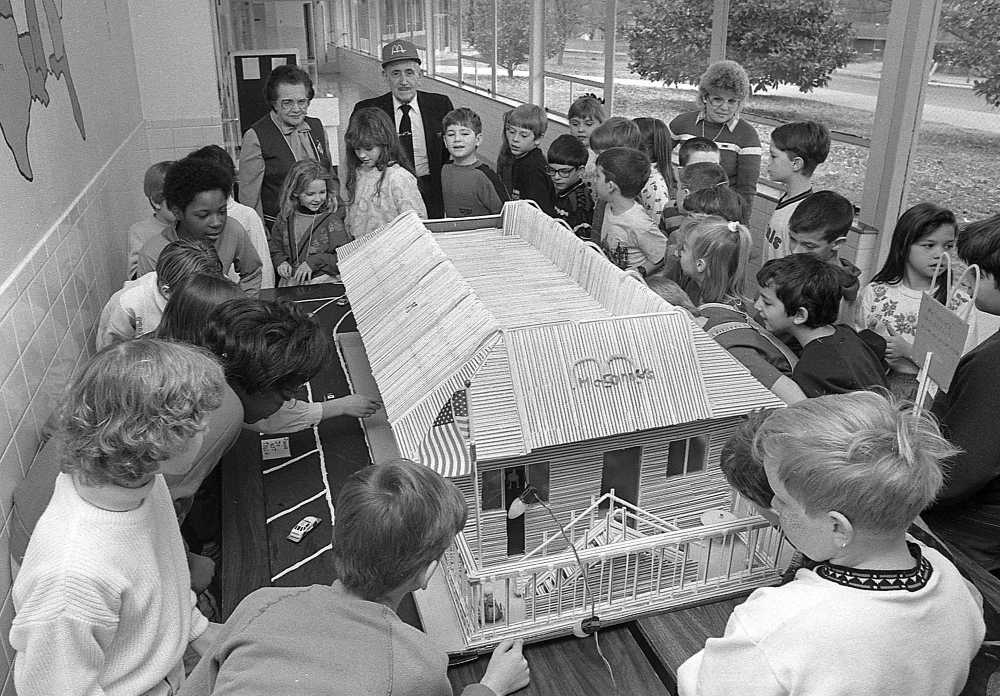 Students at Jefferson Elementary School visit a McDonald's restaurant made of straws on display in the hall Wednesday. Built by Kenneth and Wanda Corse of Cape Girardeau, the structure was made with 6,500 McStraws, 4,040 straight pins and nine bottles of glue. The Corses collected the straws during visits to McDonald's. (Fred Lynch photo)

The restaurant is a miniature version of the famed fast-food enterprise, and is constructed out of 6,500 McDonald's straws pasted and pinned in place, plus some coffee stirrers.

"I saved these straws," said the restaurant's builder, Kenneth Corse, 83, standing before the structure that was displayed on tables at the front of the school. "I didn't know what I was going to do with them.

"They all come from McDonald's, no place else. There's no other straws like that."

Students from the school moved in excited rings around the restaurant as they visited in separate groups, peeking in doorways and pointing out details of the structure. Their teachers just worked at trying to keep them moving.

The restaurant sat on cardboard painted into a black parking lot. Miniature cars circled the lot, which included a drive-up order box with a menu listing. In front of the store was a playground and a McDonald's sign sporting the restaurant's "billions and billions served" slogan.

Corse's wife, Wanda, directed fifth-grader Jimmy Seabaugh, 12, to look inside the building. "The little chairs are made out of McDonald's creamers," she said, referring to the restaurant's coffee cream containers.

"That is neat," Jimmy said after bending down and peeking in. The cream containers also serve as flower pots behind the building.

Kenneth Corse said he began saving the straws about 1980 following the opening of the McDonald's restaurant in Perryville, where he and his wife lived until moving to Cape Girardeau in July 1990. He said he had joked with the restaurant's owner that he was going to bring the straws back so the owner could have them washed and used again.

"He said, 'Ken, let's do something with these straws.' I said, 'I know what you're going to say: build a building,' and that's how I started," said Corse, a former construction worker.

Construction of the building took about 300 hours, or 1 1/2 months of steady work, he said. Corse said he finished the building about two weeks ago.

"The flagpole was the last straw," he said.

Wanda Corse said the straws came from Diet Cokes, practically all of them drank by her. "He drinks the coffee," she said of her husband.

Amber Windisch, 8, chose the words "totally awesome" and "radical" to describe the restaurant.