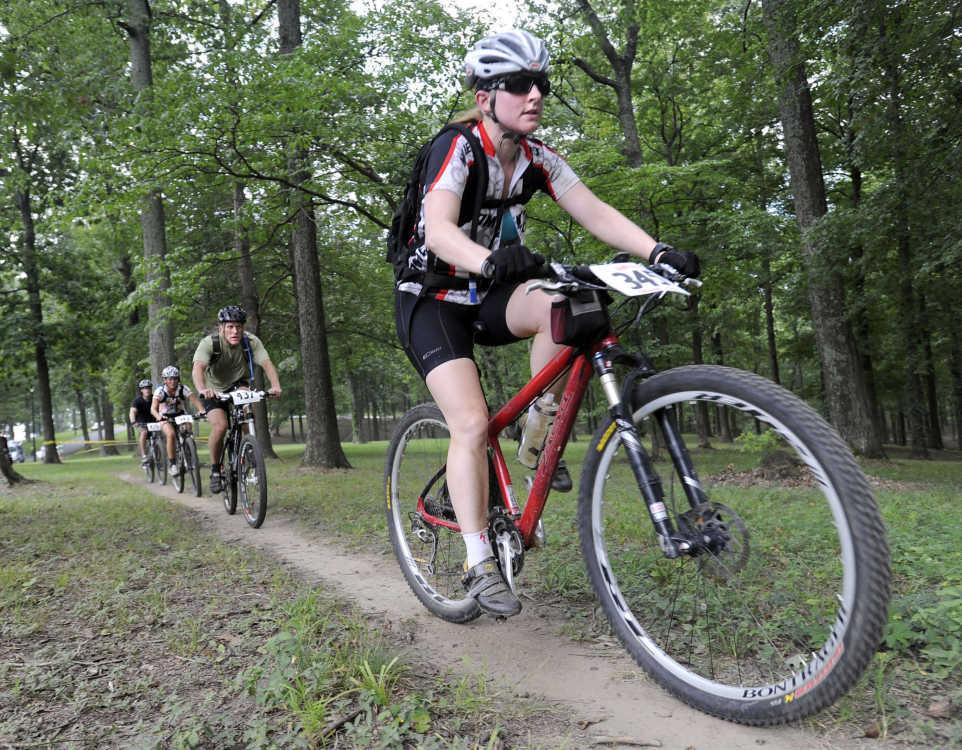 Gabrielle Renner leads a group of racers during the Cyclewerx Crankfest 2011 on Aug. 21, 2011 at Klaus Park. (Fred Lynch photo)

Bicyclists come out for race at Klaus Park

JACKSON - Friends and relatives of former county judge, Alvin F. Klaus, who died in office last year, will be present Sunday afternoon at 2:30 for the dedication of Klaus Park, the first county park in Cape County.

The 20-acre park, an isolated tract of the County Farm located west of Highway I-55, is currently being developed.

The dedication ceremony will take place about 100 yards south of the entrance to the park, where a stone marker and bronze plaque were installed this week.

Judge Klaus, for whom the park is named, has served Cape County as an elected official since 1947, when he was chosen to fill an unexpired term.

In June, Judge Klaus was elected to complete the unexpired term and in November, 1948, was elected to a full term. He succeeded himself as sheriff in 1952.

In 1958, Judge Klaus was elected as County Court judge from the northern district. He served three full two-year terms and was in his fourth term at the time of his death.

At the dedication Sunday, the Rev. Walter Keisker will speak. County Court personnel will unveil the plaque and presentations of the colors will be by Boy Scouts from Troop 11 of Jackson. Tom Cosgrove of Jackson will sing.

Klaus Park may be reached from an access road west of the intersection of Highway 61 and I-55 between Jackson and Cape Girardeau. Signs are to be erected showing the route.

The dedication was led by the Rev. Walter Keisker, pastor of St. Paul Lutheran Church here and took place at the new monument in the park to former County Court Judge Alvin F. Klaus.

Workmen completed setting the stone, over four tons, early last week and the plaque to Judge Klaus was installed later.

Judge Klaus served Cape County over 20 years, being sheriff from 1947 to 1956 and County Court judge from 1958 until his death in August of last year. He also worked earlier as a deputy sheriff.

The park, which is under development, is a 20-acre tract of the County Farm located west of Interstate Highway 55.

The plaque was unveiled by County Clerk Rusby Crites and Associate County Judge Arnold Roth. Tom Cosgrove of Jackson was soloist and the presentation of the colors was by Boy Scouts of Troop 11 in Jackson.

Cape County soon will have an additional 30 acres of park space thanks to a cooperative agreement between the County Court, the Planning and Recreation Committee and the County Sheriff's Department.

The project, a rehabilitation program for prisoners of the county jail at Jackson, involves clearing of underbrush and trees in Alvin F. Klaus Park, a wooded tract about half way between Cape Girardeau and Jackson.

Prisoners, he said, not only are helping themselves in keeping busy and getting time off their sentences, but it is also saving county taxpayers a good sum of money by using jail labor. And, of course, it is rapidly making additional park space.

The park, named after former County Court judge Alvin F. Klaus, who served from Jan. 1, 1958 to Aug. 12, 1965, has sat practically dormant since its dedication in October 1966. There has been some improvement to the land, but a lack of funds has prohibited rapid development, according to A.C. "Doc" Brase, chairman of the County Planning and Recreation Committee.

Sheriff McLain said he selects those prisoners which he feels are able to withstand the work. It is solely on a volunteer basis, he said.

Only those prisoners who have been sentenced to jail terms are eligible to work in the park. He said the County Court approves each selection and under the "three-quarter" rule, prisoners who are involved in the rehabilitation program are docked one-fourth of their prison term.

"These boys are really happy to be able to get out and do something with themselves," Sheriff McLain said. "In fact, I've got some prisoners who probably would plead guilty just to get out and work," he added.

The sheriff said the prisoners, usually five or six at a time, are taken to the park at 8 a.m. Mondays through Fridays and work until 4 p.m. They are under the supervision of Jerry Kestner, a department dispatcher who says he has about all the trust in the world in his workers.

"I could probably leave them here right now," he commented Tuesday afternoon, "and tell them to be up here at 4 o'clock to be picked up and they would be here."

The rehabilitation program began on June 14, Sheriff McLain said, and "we are hoping to make it into a permanent thing." He added, "These men would much rather be able to get out and work or do something with their time rather than sit around in a hot jail cell all day."

The park is located alongside Interstate 55, just west of the Highway 61 interchange. It is heavily grown up in vines and brush and trees are extremely thick. The laborers clear the underbrush and fall trees, leaving those which will furnish adequate shade. Mr. Brase said grass will be planted in the cleared areas later this year.

With an annual budget of about $5,000, the Planning and Recreation Committee is unable to sink a great deal of money into projects of this type. Based on a minimum wage of $1.60 hourly, the prison help is saving the county an estimated $320 each day they work.

Mr. Brase, who is overseeing the work, said the "good high spots" and areas on either sides of the roadways are being cleared first. Should the project prove to operate as successfully as it has the first two weeks, all of the area will eventually be cleared, he added.

The Cape Girardeau Jaycees have built two picnic shelters at the north end of the park and other picnic areas which overlook the interstate are also ready for use.

Mr. Brase said any organization interested in helping develop the conveniently located park are welcome to contact the County Planning and Recreation Committee.