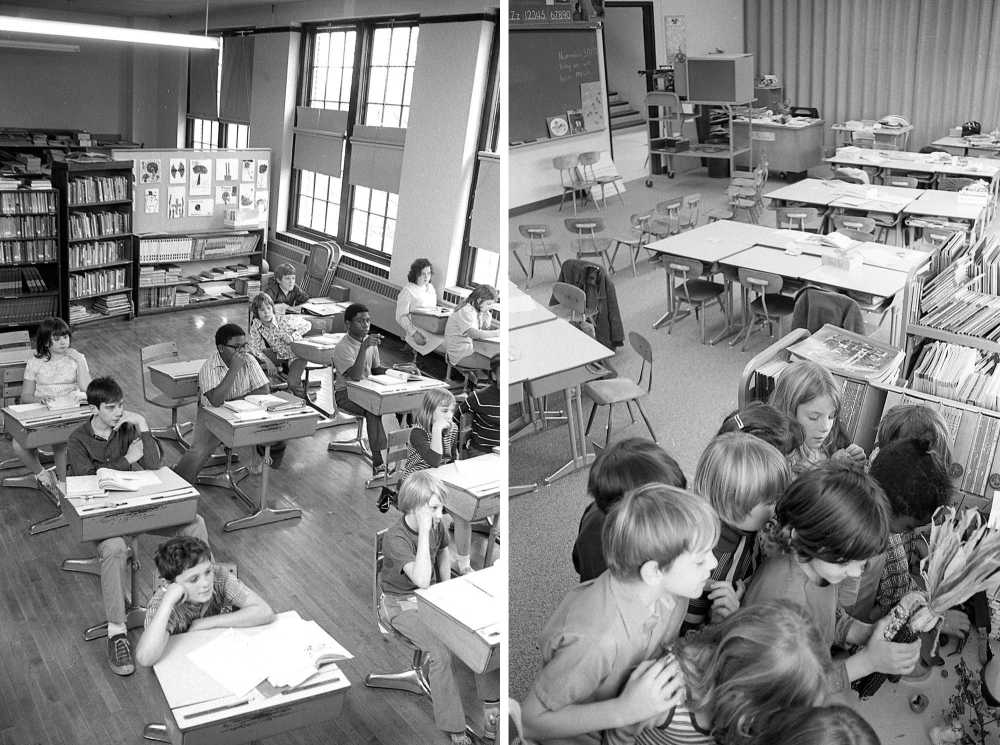 Cape Girardeau voters are to go to the polls Tuesday to decide, among other things, if classrooms like the one, above left, at Washington School, should be remodeled to resemble the classroom on the right. Mrs. Finley Maddox's sixth-grade room has high, noisy ceilings and hardwood floors. There is no rest room on the third floor of Washington School, either. A favorable vote Tuesday would change all that, transforming the unattractive room into one resembling Mrs. Rosco Lewis' second-grade classroom, right, complete with carpeting, acoustical ceiling and well-lighted space.

Completion of a renovation program initiated several years ago at Cape Girardeau public schools and more facilities for vocational-technical classes will ride on the outcome of Tuesday's special school election.

Patrons of the school district are being asked to approve a $995,000 bond issue to finance an addition to the Vocational-Technical School and for remodeling work at Washington, Lorimier and Franklin Schools.

School officials have emphasized that approval of the bond issue would cause no increase in school taxes.

The present overall school tax levy is $3.77 per $100 assessed valuation. Of this levy, 52 cents is for debt service purposes, and this current rate will continue to produce sufficient revenue to retire all present indebtedness plus the new debt, should the bond issue be approved.

Through the years, the school system has remodeled and repaired buildings as needed when money was available. In 1964, voters approved a bond issue of $795,000 for construction of Hawthorn School and renovation of the former Junior High School on South Pacific, now Louis J. Schultz School.

In 1966, a bond issue of $775,000 was passed for erection of the Vocational-Technical School and a number of other improvements. They included a new kindergarten room at Alma Schrader School, an annex to Central High School and a covered walkway between the high school and junior high building.

Considerable work also was done at Lorimier and at Washington. But the school district ran out of funds before the remodeling was completed at these two building. These projects would be finished with money from the proposed bond issue, if passed.

A major overhaul of Franklin School is planned.

School officials said that the renovation of what is now Schultz School and of May Greene provided Cape Girardeau with the equivalent of two new buildings at much less cost. Improvements planned at Lorimier, Washington and Franklin will have the same results if completed, they said.

Washington School was built in 1914. There have been two additions since that time--in 1926 and 1931. In its current renovation program, remodeling of the oldest section on the west or back part of the building has been completed. A new heating system has been installed for the entire building.

When the 1926 addition was made to the original structure, a building was constructed in front of a building, connected by an enclosed hallway. Beneath the hallway is a wide tunnel.

If Tuesday's bond issue is approved, plans are to excavate the tunnel, converting this area to a useful hallway to provide access to the gymnasium cafeteria, ground level classrooms and the playground. Thus, the hallway would connect the older and newer buildings on the lower level as hallways do on the two upper floors.

Franklin School was built in 1926. An extensive general renovation is planned at this school at an estimated cost of $500,000. Last summer, two restrooms were remodeled at Franklin. New tile was placed on some of the walls with dropped ceilings installed in part of the rooms. Franklin now has all-aluminum doors.

It was about 7:34 Tuesday night when Hal B. Lehman, Cape Girardeau schools business manager, jokingly remarked, "I think I'll go home, get my saw, hammer and nails and go to work."

He set the mood for administrators gathered at the Board of Education office on North Clark as they watched the votes pile up to a more than 4 to 1 victory for the $995,000 school bond issue.

The money will be used to renovate Franklin School, complete remodeling of Washington and Lorimier and construct an addition to the Vocational-Technical School.

A two-thirds majority was needed to pass the issue which involves no tax increase.

Mrs. Melvin C. Kasten, school board president, arrived shortly after victory was assured. Speaking for the board, she said, "We are more than pleased that we can continue to renovate the three older elementary schools and construct an addition to the Vocational-Technical School. When work on these buildings is complete, we can offer better facilities to meet the community's educational needs."

She emphasized the older buildings are structurally sound and renovation will be considerably less expensive than constructing new schools.

Supt. Charles E. House, speaking for administrators, said, "Everyone is elated about the outcome. We think this is a shot in the arm to both the school system and the community. It will have a positive effect on all of us."