The Dunk at old Central gym 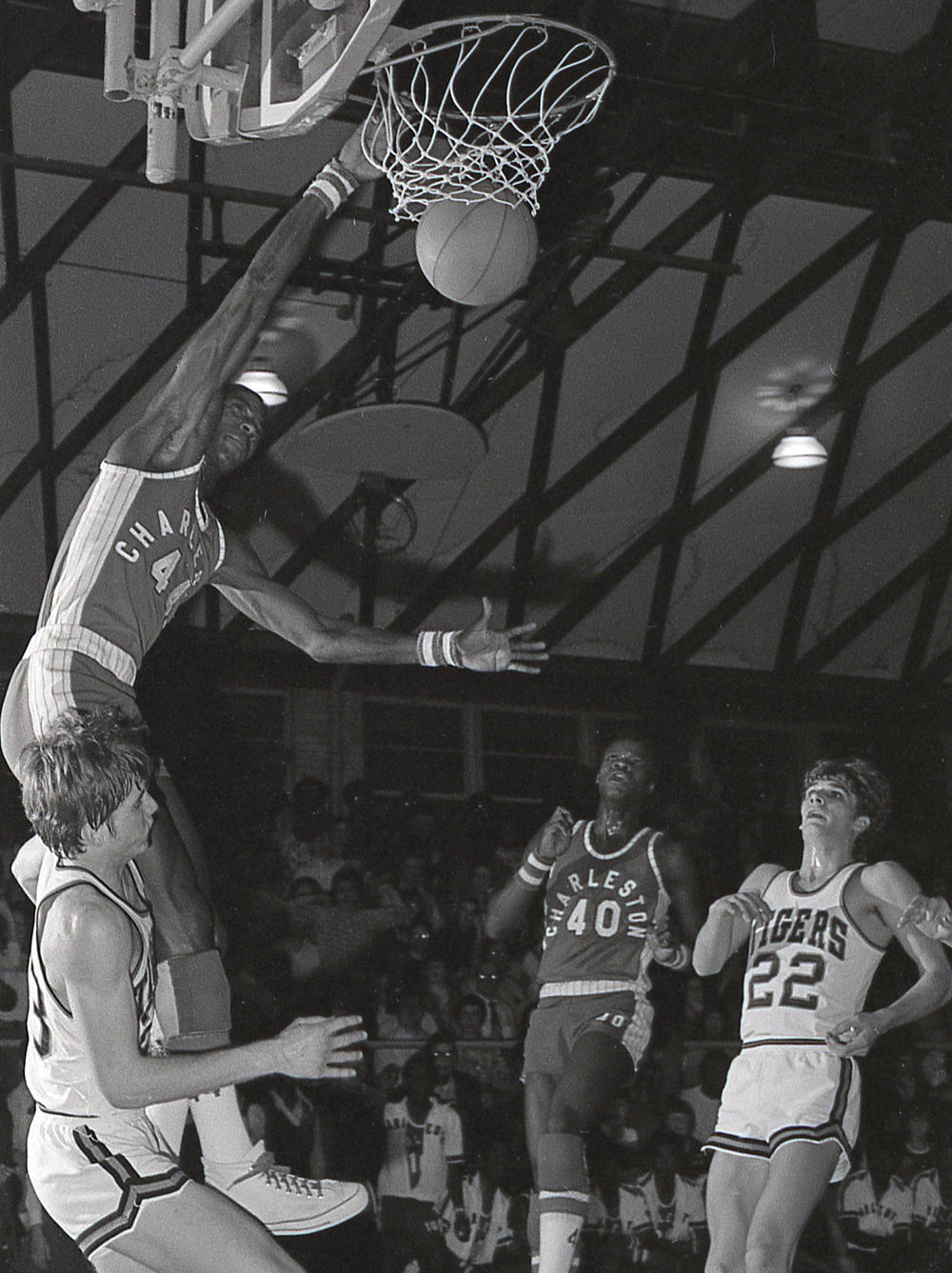 The slam-dunk, which was reinstated in basketball for the 1976-77 season, has added new excitement to the game, and above, Charleston's Ricky Frazier shows how it's done. The 6-6 senior frontman collected 23 points and hit the boards for 17 rebounds in helping his Blue Jays to a 73-59 win over Cape Girardeau Central Tuesday. In this play, however, Frazier was called for a charging foul against Central's John Heins, but the bucket did count. (Fred Lynch photo)

It was the game Cape Central fans had been looking forward to for weeks--Central against Charleston.

Billed as the probable SEMO Conference title contest, the Central-Charleston game drew hordes of fans into the Tigers' gymnasium Tuesday night. Faces of some Central fans had not been seen all season. Others hadn't been around for years. But they were there this night.

Before the jayvee game was half completed, Central's rustic gymnasium was jammed to capacity. The entrance doors were flooded with people while the not-so-fortunate were turned away at the ticket door. One Charleston booster even took up residence atop the chin-up bar on the floor's west end to get a better view of the action.

Most of the fans were there hoping to bring down with cheers a few more of those wall panels, whose missing numbers are many. These fans were hoping to see those scrappy Central Tigers upset those big, bad and undefeated Charleston Blue Jays, the state's No. 1 ranked Class AAA team.

But these fans left Central's gymnasium disappointed. Victimized by some awesome rebounding and torrid first-half shooting, Central fell to Charleston, 73-59, Tuesday night in the last scheduled game in Central's old gymnasium. It also was Central's only home loss of the season.

In another conference game, Perryville bumped Dexter 51-40 and in a game involving a SEMO Conference team, Jackson fell to Flat River, 89-81.

"Hey, I don't think we played that bad a ball game," Central coach Dan Milligan said. "But the Charleston team we faced tonight was the best we've seen all season. They were plenty salty."

"In the first half, we shot about as well as we can," Haskins said. "We couldn't have played much better offensively.

"At halftime, I kicked up a fuss about our defense. And in the second half, I thought we played the 'D' exceptionally well."

But in the long run, it was Charleston's rebounding, dominating Central 40-21 along with the first-half shooting spree that led to the Tigers' undoing.

From the start Central was battling uphill. With Charleston connecting on 11 of 16 first-quarter shots, the Tigers found themselves down by as many as 10 points and ended the quarter trailing 22-14.

Charleston, however, failed to cool off in the second period. If not for some clutch baskets from John Heins, Ronnie Rencher and Blake Miller, the Tigers may have found themselves completely out of the game. Still, Central trailed by 10, 40-30 at halftime.

At second half's start, Central scored three of the first four buckets and cut Charleston's lead to 42-36. The Tigers then had two consecutive opportunities to cut the deficit to four, but failed to capitalize.

"If we could have gotten a bucket one or both of those times," Milligan said, "things might have been different.

"That was a crucial part of the ball game. If we score, the complexion of the game changes. But we came away with nothing."

And those sequence of events seemed to stimulate Charleston's 5-10 guard Mike Smith.The cat-like quick Smith first traded buckets with Rencher. Then he converted a three-point play. Next he hit Mike Dean with a behind the back pass for a lay in. Then he traded buckets with Heins and Charleston owned a comfortable 11-point lead.

Late in the quarter, 6-6 Ricky Frazier awed the crowd with a length of the floor drive and subsequent slam-jam. By third quarter's conclusion, the Tigers trailed 58-44.

In the fourth quarter, the Tigers continued to scratch and claw but could never move closer than 10 points.

However, missing Tuesday night was Lacey Bernard's usual potent offense. The 5-11 sharpshooter injured his shooting hand in practice Monday and the results showed in the statistics. Bernard, who had been hitting close to 60 percent in recent ball games, connected on only two of 13 shots against Charleston.

Meanwhile, Frazier, cracking the offensive boards, led Charleston with 23 points while Smith added 19. Wilbert McCain and Dean rounded out the double figure scoring with 15 and 10 points respectively. Frazier also dominated the board game, with 17 rebounds.

The dunk, a crowd-pleaser

The "stuff" is back.

And, on the prep courts as well as collegiate hardwoods, players are turning on crowds--and, momentum.

"It's the greatest single thing that has happened to offense, and the game, in a decade," said Mitch Haskins, Charleston High School coach.

Many of the prep players who are stuffing their way to greatness hadn't thought of the roundball sport when the dunk was banned in the late 1960s.

"You know how I feel about the dunk," added Haskins, who has four front-line people who can use the high-powered shot. "It's a crowd-pleaser, an intimidator, and can change the momentum in a game. For a team and fans, it can be a psychological uplift. And, that's what the game needs."

Frazier, who rates as the "sky king" in southeast Missouri--more than 70 dunks, including seven in one game--tells his coach: "It's a lot easier to go up and dunk the ball through the hoop than to concentrate on a spot on the backboard for a layup."

"I just wish I had somebody who could dunk it," said Coach Bailey, who has won more than 550 basketball games in his 25-year career. "I'd like to see the rule stay. Someday, I may come up with somebody who can stuff it.

"It's an electrifying moment when a kid stuffs it," added Coach Bailey. "It can change the momentum of a game, and I could cite several instances. But, they're too numerous, really."