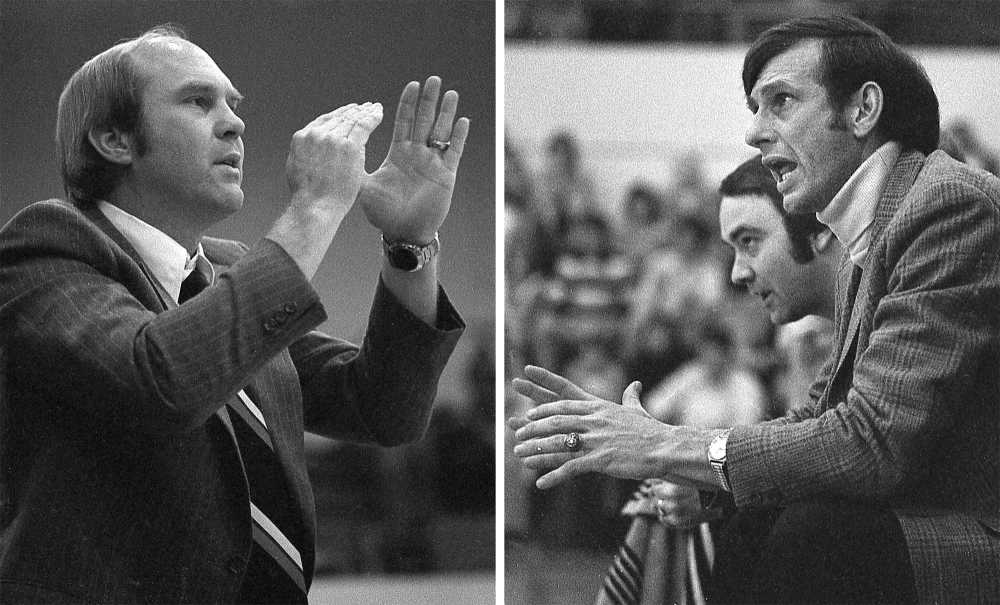 Neighbor coaches friends, on and off the court

Ed Arnzen and Dan Milligan are next door neighbors.

Instead of borrowing the proverbial cup of sugar from each other, Arnzen, coach of the Notre Dame Bulldogs, and Milligan, coach of the Central High School Tigers, are more apt to be borrowing a page out of each other's basketball playbooks to use as a sweetener on rousting upcoming opponents.

Tonight, instead of sharing the usual after-dinner cup of coffee at one of the houses and swapping basketball stories, the two coaches will meet each other at Houck Field House for the second intra-city series between the two schools. Tip-off time is 8 tonight, and a near-capacity crowd is expected for the game.

The Bengals nosed the Bulldogs out of the first game back in November by a score of 54-43, and tonight's contest also promises to be a close one for cager fans.

That Coach Milligan and Coach Arnzen are neighbors has, surprisingly, not led to a "hotter" rivalry between the schools, but rather has added solidarity to the premise that basketball, like other sports, is built around sportsmanship and a healthy respect for opposing teams.

The five-year friendship between Milligan and Arnzen will have no bearing on tonight's game. "Once in the gym, we'll both have the same objective, and that's to win," said Arnzen. "Living next door to each other hasn't changed our friendship or our desire to win on the court."

Meeting the man who has shared backyard barbecues at the Milligan home on the basketball court promises to be "difficult," says Coach Milligan. "But no matter which way the game goes, we're still friends."

Some avid fans claim Central-Notre Dame clashes are always low-scoring affairs because both teams, under tremendous pressure, concentrate on playing cautious ball. Although "we're familiar with each other's squads and coaching philosophies, whoever wins the game is going to basically be a matter of what the kids do," Arnzen believes. "It's going to depend on how well they stand up under the nose of the crowd and execute the coaching principles we've taught."

There's little effort made at "surprising" the other team, Milligan adds. "We don't change too much from the start of the season to the end. We try to work on areas where we're weak, and get better execution, but I don't really have too many surprises. I don't feel a team can win by tricks."

From the mid-to-late sixties, it was Notre Dame that dominated the courts in the intra-city contests. But for the last three years the Tigers have captured the city crown.

"We're looking forward to the game," says Arnzen. "We feel we've improved since our last meeting. But Central has been improving, too. Last time out we had trouble with the Bengals' zone press, and that's one thing we're going to have to watch tonight."

Generating team spirit is important to Coach Milligan for tonight's contest. "I just hope we can get the boys up for the game," says the Tiger head man. "Sometimes it's hard to do this when you play a team twice in the same year."

Rivalry between the cager units is a healthy thing, both coaches agree. "It gives a tremendous amount of people a chance to see both schools play," says Arnzen. "We've always had good crowds; Notre Dame fans and Central fans will walk out of the gym together, shaking hands, no matter which team wins."

Among the fans tonight will be Mrs. Milligan, who has compiled an admirable record herself by missing only three games for the past five seasons, and Mrs. Arnzen and two daughters, Sherry and Amy. Amy, Coach Arnzen admits, often finds herself torn between clapping her chubby little hands for Ed or Dan. "Sometimes," Arnzen says, "I'm not so sure she's rooting for me."

Milligan adds that the youngster takes delight in calling to her next door neighbor on the bench.

Both men see tonight's game shaping up to be a good one, with plenty of excitement for both factions. "I've got a lot of respect for Ed, on and off the court," says Milligan. "Win or lose, he's nice to have as a neighbor."

Arnzen adds that he sees Central as a good ball team, not as a rival. We're going to play good ball tonight, and that's what I think, is the whole purpose of the match."

The Bulldogs nipped the Tigers at the wire, 55-52. Sports writer Mike Dougherty described the game in the Jan. 30, 1974 edition of the Southeast Missourian:

A minor miracle. That's what Cape Central fans said it would take for the Notre Dame Bulldogs to beat their Tigers. Well, miracles sometimes happen--and did this time. Notre Dame pulled a stunning upset and snapped a seven-game Central winning streak with a 55-52 shocker over the Bengals before a capacity crowd at Houck Field House Tuesday night.

It was a game that had a little bit of everything. At first, a runaway for Central seemed inevitable. Then the tide turned completely, and Notre Dame appeared headed for an easy victory. But, the Tigers went to work, tightened things up, and the second half was fought to the wire--basket by basket.

Of course, rivalry added to the effect. The natural one between the two largest high schools in the city, and the geographical one of the two coaches living next door to each other.

This time, Notre Dame followers and the folks on Ed Arnzen's side of the fence came out ahead--but not before a fight to the finish that had the full-house crowd on its feet and screaming for the last eight minutes.

Dan Milligan and the 1980 Central boys basketball team (29-4) were inducted into the Cape Central Hall of Fame in 2014.

The team turned a rebuilding year into the school's second state championship in the sport. Milligan announced his decision to retire near the end of the season, and his team gave him quite the sendoff, including a 53-51 win over Hickman Mills in the Class 4 championship game.