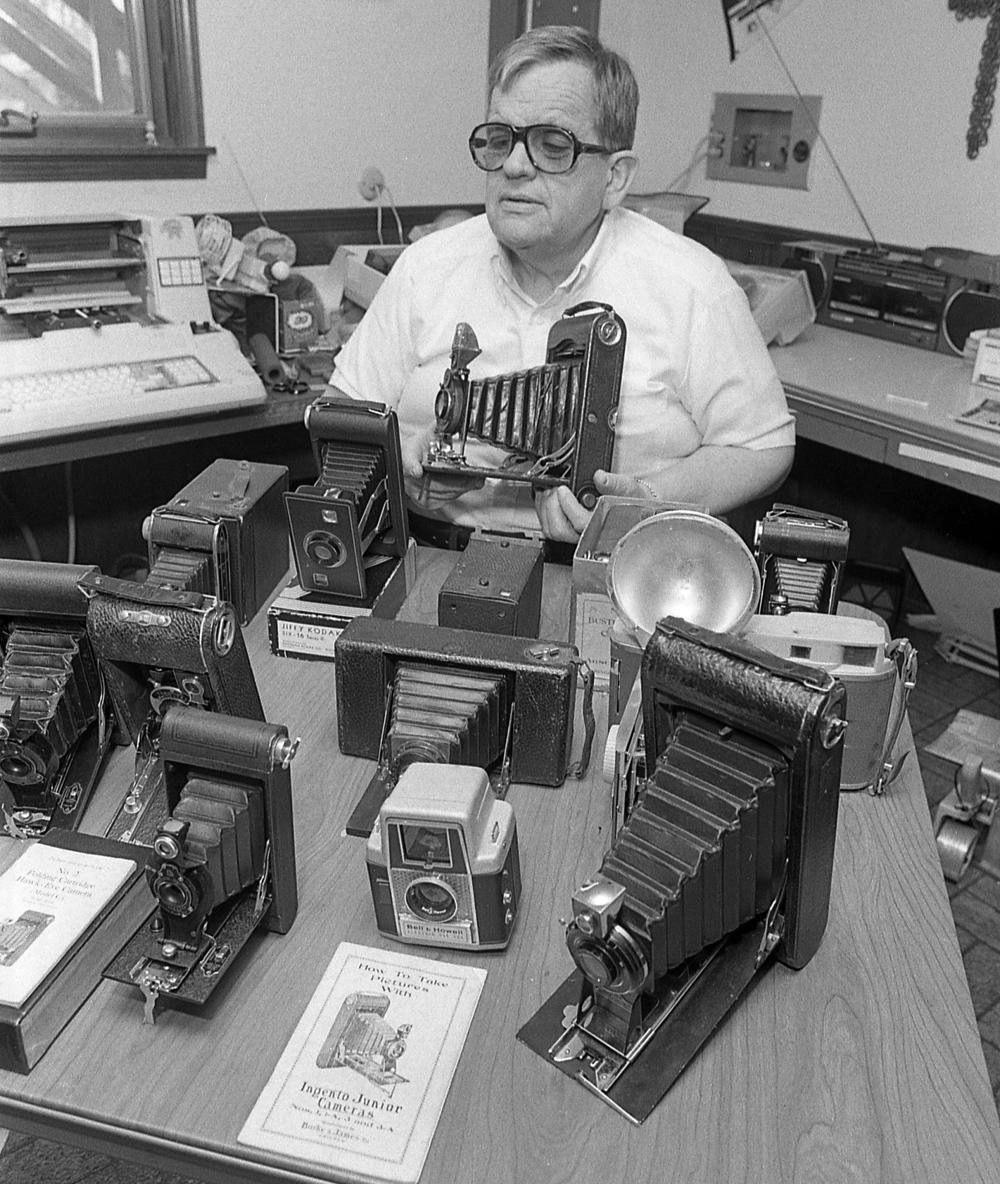 Harold Kuehle displays some of the old cameras that he has collected over the years. Although the cameras might still click, the right film size for most is not readily available. (Fred Lynch photo)

Cameras of all kinds

His house is crammed full of cameras, some of them dating back to around the turn of the century.

Kuehle, who has served as county collector since 1967, has about 100 cameras, from old Polaroid to box cameras. "I've always liked cameras," he said.

"They might not be valuable, but they are really conversation pieces," he said.

Old cameras, he said, will often trigger memories for people who had such cameras in their youth.

Kuehle started collecting cameras about four years ago. His first camera was an old Polaroid that his wife, Peggy, bought at a garage sale.

He still gets some of the cameras from garage sales. But many, he said, have been given him by friends and acquaintances.

His oldest camera is a panoramic camera, which dates back to 1891. Kuehle said the camera has a fan-type shutter that moves across the film, providing a picture with a 180-degree view.

Kuehle has had the camera since December, when it was found in an old building in Cape Girardeau. He said he hopes to have the camera restored to working condition.

His collection includes an old box camera dating back to near the turn of the century. The camea uses glass plates rather than regular film.

Kuehle has other box cameras that used film.

In the early 1900s, the box camera was a familiar sight. "Most people back then had the old Kodak box camera simply because it was economical and easy to use."

Kuehle's collection also includes an autograph camera. The photographer can open a metal slot on the back of the camera and write on the film with a metal stylus recording the date, place or some other piece of information that would then show up on the finished photograph. Kuehle said autograph cameras were made from 1914-1927.

Kuehle also has a handheld, German aerial camera that was used in the African campaign in World War II. "It shoots 90mm film," said Kuehle, who acquired the camera at an estate sale in Jackson last year.

"I got one (camera) made by the Sparta Camera Co. in Sparta, Illinois," he said. Kuehle said he has been unable to find out any more information about the company.

The firm is apparently no longer in business. Kuehle said he contacted the Chamber of Commerce in Sparta, but the chamber had not record of such a company.

Kuehle has an Argus-C camera. Dating from the period of 1938-1942, the camera has been called "the brick" because of its boxy shape.

Not all of the cameras are of a serious nature. One is a small novelty camera advertising Velveeta cheese.

Kuehle has a number of Polaroid cameras, some of them dating back to the 1950s.

Some of the cameras in his collection include the original instructions and the boxes they came in. In many cases, said Kuehle, that makes the cameras more valuable.

Today there are disposable cameras; the consumer buys a camera with film in it, takes the pictures and then ships the whole thing off to be processed. But Kuehle said such cameras are nothing new.

Kuehle said he enjoys the craftsmanship of cameras, many of which he sees a works of art. "I like to try and think about the people who made them.

"With their design and format, you often wonder what their hangup was," said Kuehle, explaining that he wonders, for example, what led to the demise of signature cameras.

Now and then, Kuehle finds undeveloped film left in the cameras. One roll of film he recalled, featured a series of shots from a cemetery.

Kuehle estimates that about 85 percent of his cameras are in operating condition.

Although his cameras come in all shapes and sizes, Kuehle said they all operate essentially the same way.