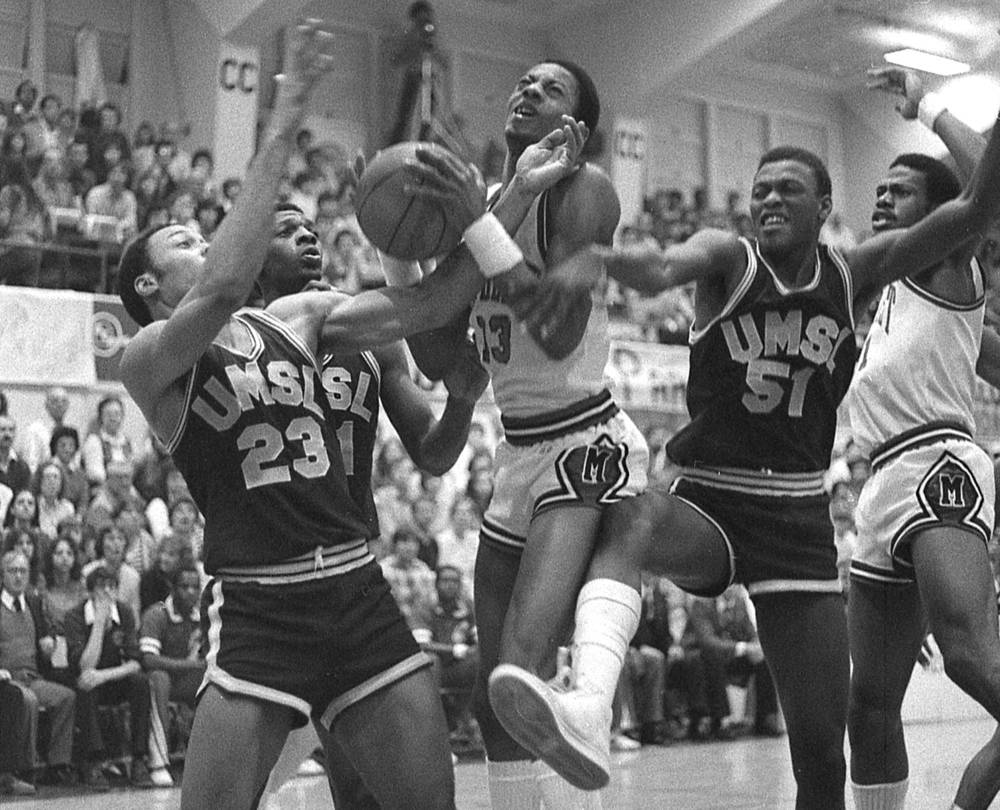 SEMO State's Jewell Crawford (13) grimaces while fighting for a rebound in-between three UMSL players in Saturday's 67-60 victory which clinched the Indians' first MIAA crown in 18 years. Grabbing for the rebound for the Rivermen are Tim Jones (23), Ron Tyler (51) and Lonnie Lewis (21). Below, Anthony Thomas, Southeast Missouri State's only senior, joyfully cuts down the net after the Indians defeated the University of Missouri-St. Louis to claim their first MIAA title in 18 years. Thomas, a 6-foot-7 center from Hurtsboro, Alabama, has endured some lean years at SEMO State, including a last-place finish in the conference in the 1980-81 season. (Fred Lynch photos) 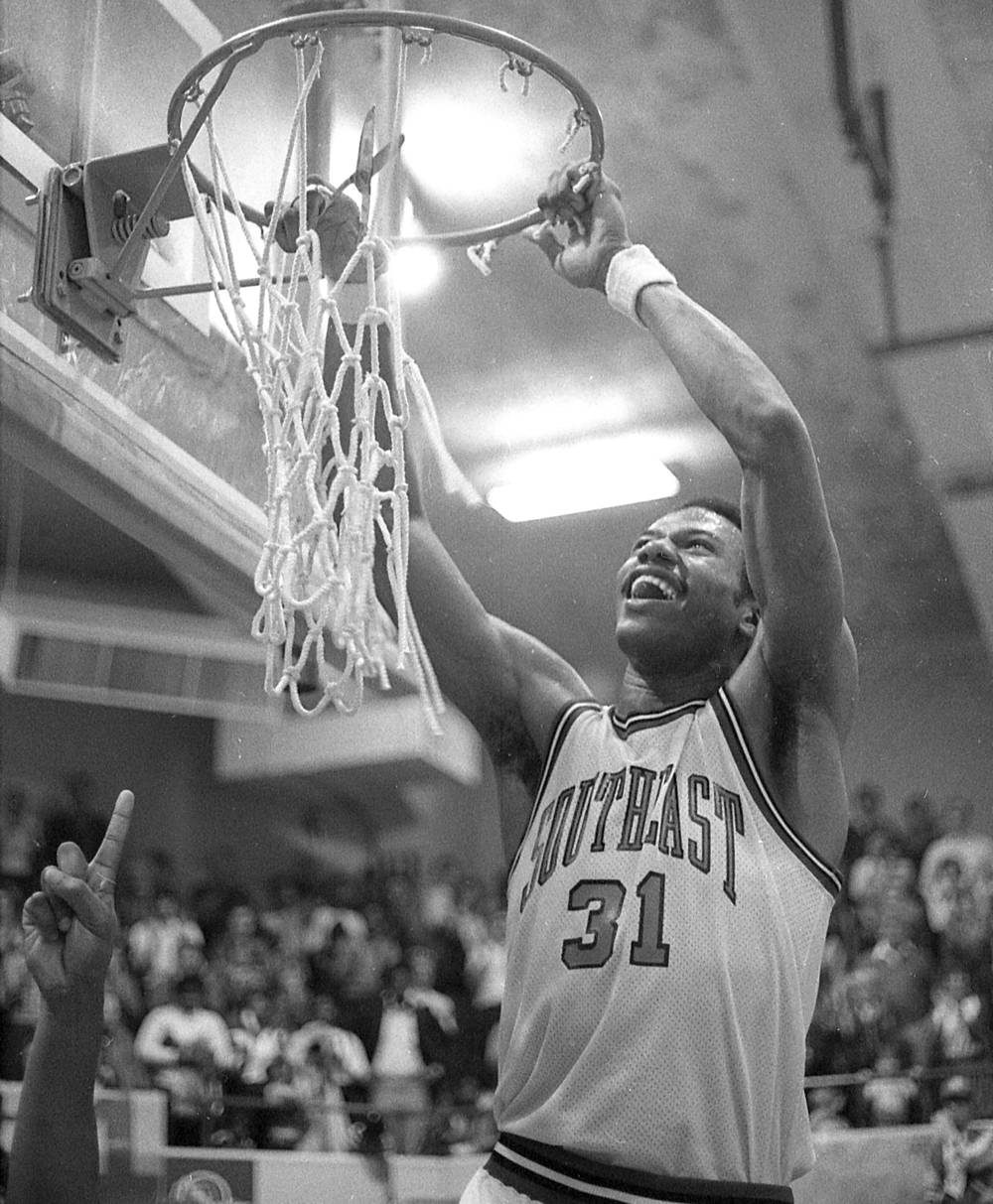 When Ron Shumate was hired by Southeast Missouri State University as the new basketball coach last spring, he said, "I visualize SEMO as a sleeping giant that hasn't been awake for several years. I'm here to wake it up."

But for the past 18 years, under previous management, the Indians haven't even heard the alarm clock. Until Saturday night at Houck Field House, that is.

Shumate and Co. brought the Indians out of that deep slumber by defeating the University of Missouri-St. Louis, 67-60, to lay claim to an undisputed Missouri Intercollegiate Athletic Association championship. It is the Tribe's first title since the 1963-64 season.

"I think we have the giant stirring now," said Shumate, whose squad ended the regular season at 18-8 overall and 9-3 in the loop one game ahead of Central Missouri State. "But I don't know if he's awake yet."

The Indians, picked to finish sixth in the seven-team league, will now host Thursday's semifinal game against the winner of the Northeast Missouri State-Missouri Rolla game in the MIAA post-season tournament. The tourney champion receives an automatic berth in the National Collegiate Athletic Association Division II tournament. If they win Thursday's game, and the Tribe are now 13-0 in Houck Field House, they'll also host the title game.

That unbeaten string at Houck looked to be in jeopardy, however, as they relinquished what had been a 12-point lead, five minutes into the second half.

The Rivermen tied the game at 43-all--their first deadlock since the game was tied 4-4--on a three-point play by William Harris.

A free throw by Lew Brookins gave the Tribe a 44-43 edge, but Harris missed a shot that would have put UMSL ahead. After an exchange of buckets, the Rivermen again had a chance to take the lead, but Warren Wendling came up with a steal and fed Jewell Crawford on a fastbreak for a 12-foot jumper.

Terry Mead followed with another steal and fed Wendling for a layup on a 3-on-1 fastbreak to put SEMO State ahead 50-45.

Not to be left out, the Indians' Alan Barnett got into the act with a solo performance on the ensuing play, stealing yet a third Rivermen pass and driving all the way down the court for a layup and a 52-45 advantage. The 6-foot-4 junior forward added two free throws 15 seconds later and SEMO State was back on top by nine, 54-45. UMSL never got closer than seven the remainder of the game.

"When it comes down to the end, we just seem to pull it out," Wendling said. "They came back on us and got close there for awhile until we got that surge with about eight minutes to go. The crowd really helped get us pumped."

With a capacity seating of between 2,400 and 2,500, Houck was jammed with an overflow of 2,600, most decked out in the home team's color--red. And, by game's end, nearly all of them were on their feet, cheering the champions.

"The fans were great again," said Shumate. "It was a beautiful feeling at the end, but all the credit goes to the players. They're the ones who worked hard all hyear long and all we can do is try to organize them."

Though downplaying his role, Shumate was no doubt an important factor in turning around last year's team, which finished dead last in the MIAA and displayed a less-than-brilliant 11-16 record.

But the road to the MIAA crown was not an easy one for the Indians. It took a remarkable mid-season turnaround for SEMO State, which just five weeks ago was 5-7 overall and in last place in the loop, winless in three outings.

An eight-game home stand cured the Tribe's blues, however, as they defeated all comers to put themselves back in the thick of the conference race. By winning four of its ensuing five road games--the lone loss a non-conference setback--SEMO State vaulted to the top of the pack, needing just Saturday's win for sole possession of first.

"Yes, that is the biggest turnaround that I've ever witnessed in a season," Shumate said. "But I've never had a schedule like this either. Give a lot of credit to Tom Bartow and his team tonight, though, they played well. I still don't understand how he's last in the conference."

The taller and more physical Rivermen wreaked havoc underneath the hoop, both offensively and defensively, all night. Though SEMO State never trailed, the Indians' inside trio of forwards Mead, Crawford and center Anthony Thomas, all picked up three fouls in the first half and spent time on the bench.

"Of all the teams in the conference, we match up with UMSL worst of all," Shumate explained. "They're all strong and physical and we were worried about them all week."

With 2,700 fans crammed into Houck Field House, Central Missouri State defeated the Indians 67-64 in the title game of the MIAA post-season tournament. The loss ended a 14-game winning streak at Houck.

"It was a good year overall," said SEMO State coach Ron Shumate. "I'm proud of the players, the coaches and everyone involved in the basketball program. We made some great strides, but I'm looking to make even greater strides in the future. SEMO State basketball is here to stay. We plan on playing in the NCAAs the rest of our lives as long as I'm at Southeast Missouri."