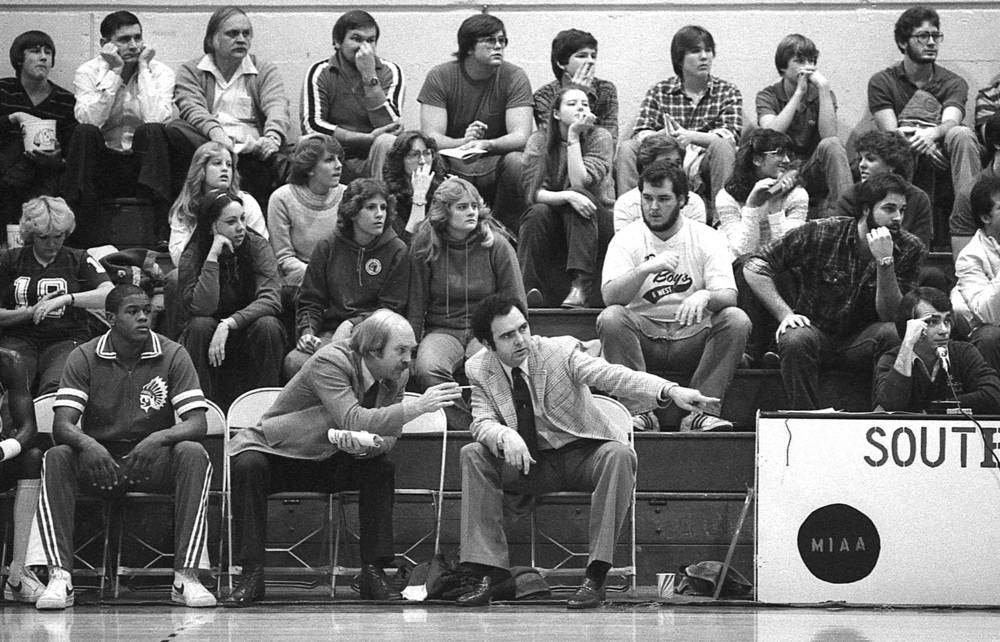 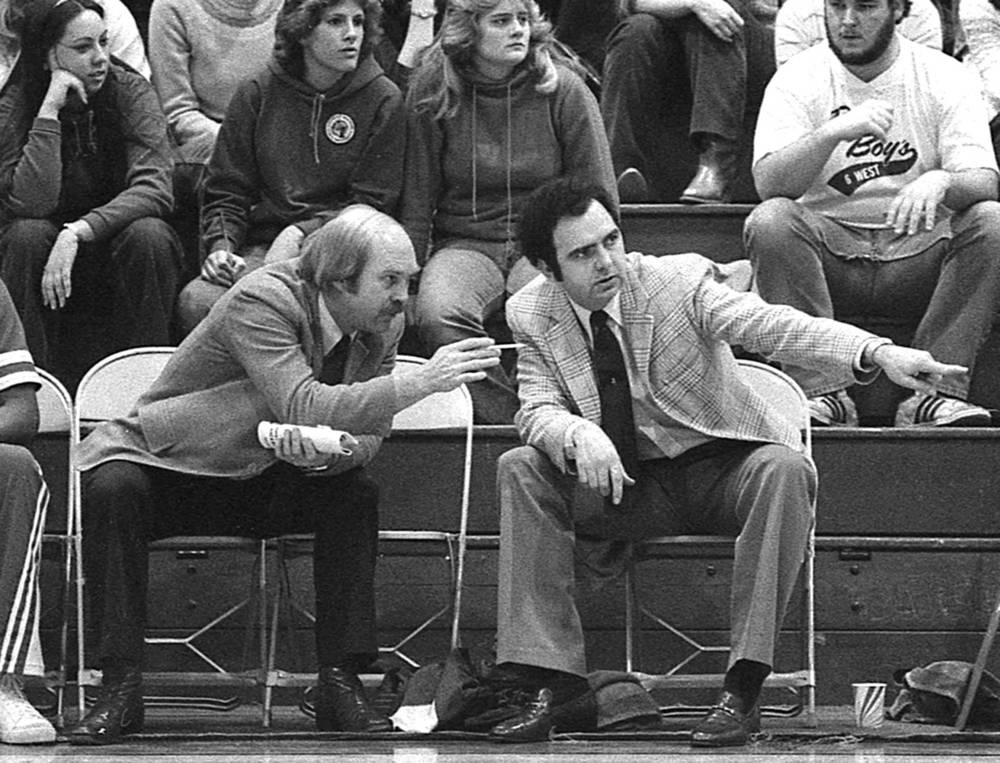 Ron Shumate, the first-year mentor of the Southeast Missouri State Indians, spends as much time out of his seat as in it during the games. He converses with assistant coach Ed Arnzen, above, directs traffic and hides his eyes when what he sees doesn't please him. (Fred Lynch photos) 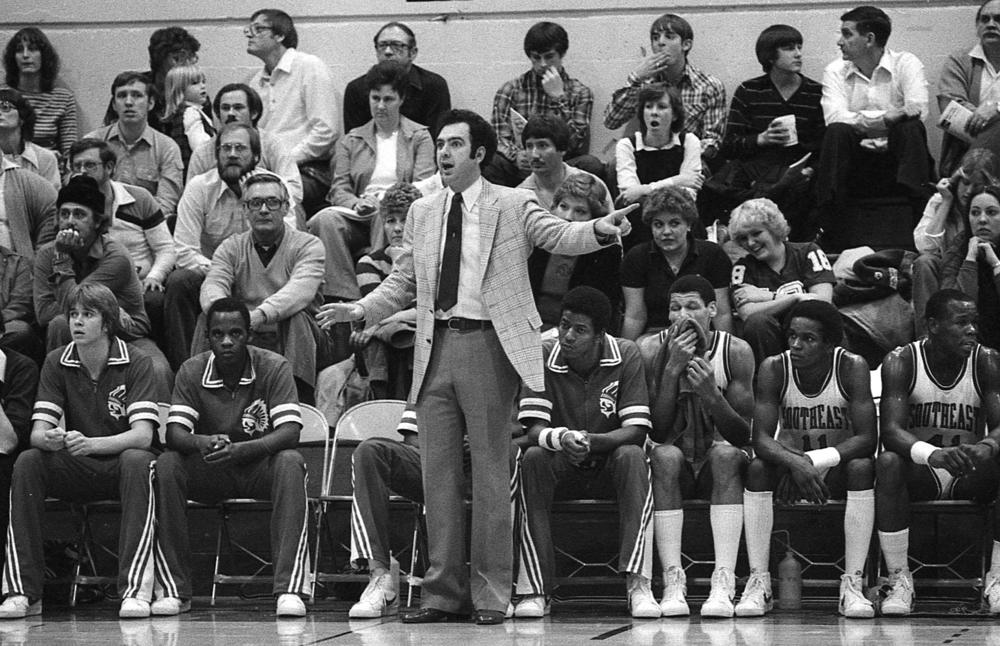 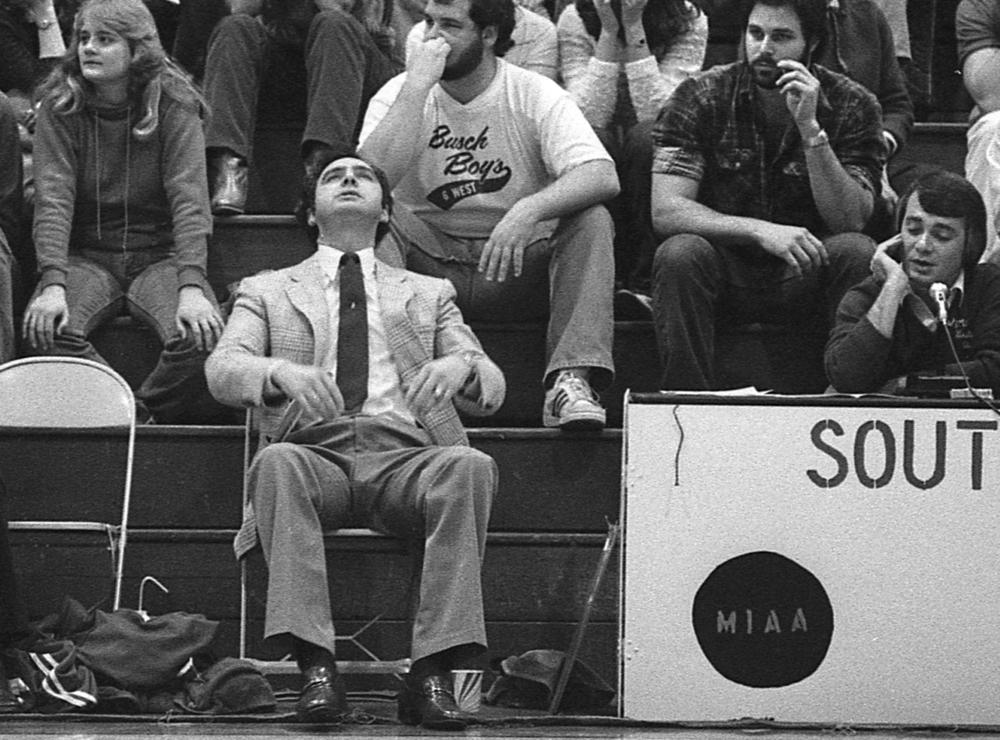 Ron Shumate, the first-year head coach, hopes his Southeast Missouri State Indians are an extention of himself, and he admits he is an emotional coach.

"I'm a very high-strung person," Shumate said. "I get really emotionally involved in the flow of a game. I take the game emotionally as hard as I want my players to play."

And therefore, he said, his team plays with emotion. One illustration was the tremendous outburst following the Indians' one-point win over Lincoln University Jan. 25 at Houck Field House. Anthony Thomas, Shumate's center, pulled down a rebound at the end of the contest to ensure the victory. Thomas had both arms wrapped tightly around the ball until he got into the locker room.

"I think anything a coach does is reflected by his players," Shumate said. "My players get very excited because I am very excited. If I was more, should we say, tranquil and quiet on the bench, I think my players would be the same way. It's a great game, a very exciting and emotional game. I just get into a ballgame and get emotional with it."

But Shumate also said he is cautious about letting his emotions get the best of him. During the contest, he said he tries to balance his feelings with rational thinking, based on as much pre-game preparation as time allows. He studies game films to detect tendencies of opposition players, maps out a strategy and translates that plan into action.

"The one thing I've always feared as a coach is that something will happen during a ballgame where I would be the cause of my team being defeated, and I don't want that to ever happen."

Watching Shumate might not be the best indicator on how things are going for his club. He'll be momentarily disgusted with an unlucky break and instantly ecstatic over a well-executed play. In between, he is busy thinking.

He's up and down off the bench during every contest giving a player instructions, objecting to an official's call or applauding a nice play. He's a combination cheerleader and mastermind, who has thus far parlayed the two roles into a 14-7 record on the season.

"There are certain anxieties in a game," Shumate said. "What especially upsets me a great deal is when the kids execute real well and then all of a sudden you tip the ball in for them, or the ball comes off somebody's hands and right to one of their players underneath the basket. That hurts.

"It's just that much more pressure on them, because you know your kids are playing hard and you're executing well, and something like that happens to them. It's just being unlucky, and that's what's frustrating to me as a coach. It's hard for your players to accept, because they've done what you've asked them to do, they've gotten their hands on the ball, and the other team still makes a basket.

"I'm not a good loser at all," Shumate said. "I'm probably the worst loser in America. I hate to lose. I hate to be associated with losers, and losing bothers be tremendously.

Read about Ron Shumate's 1985-86 team in this previous blog: