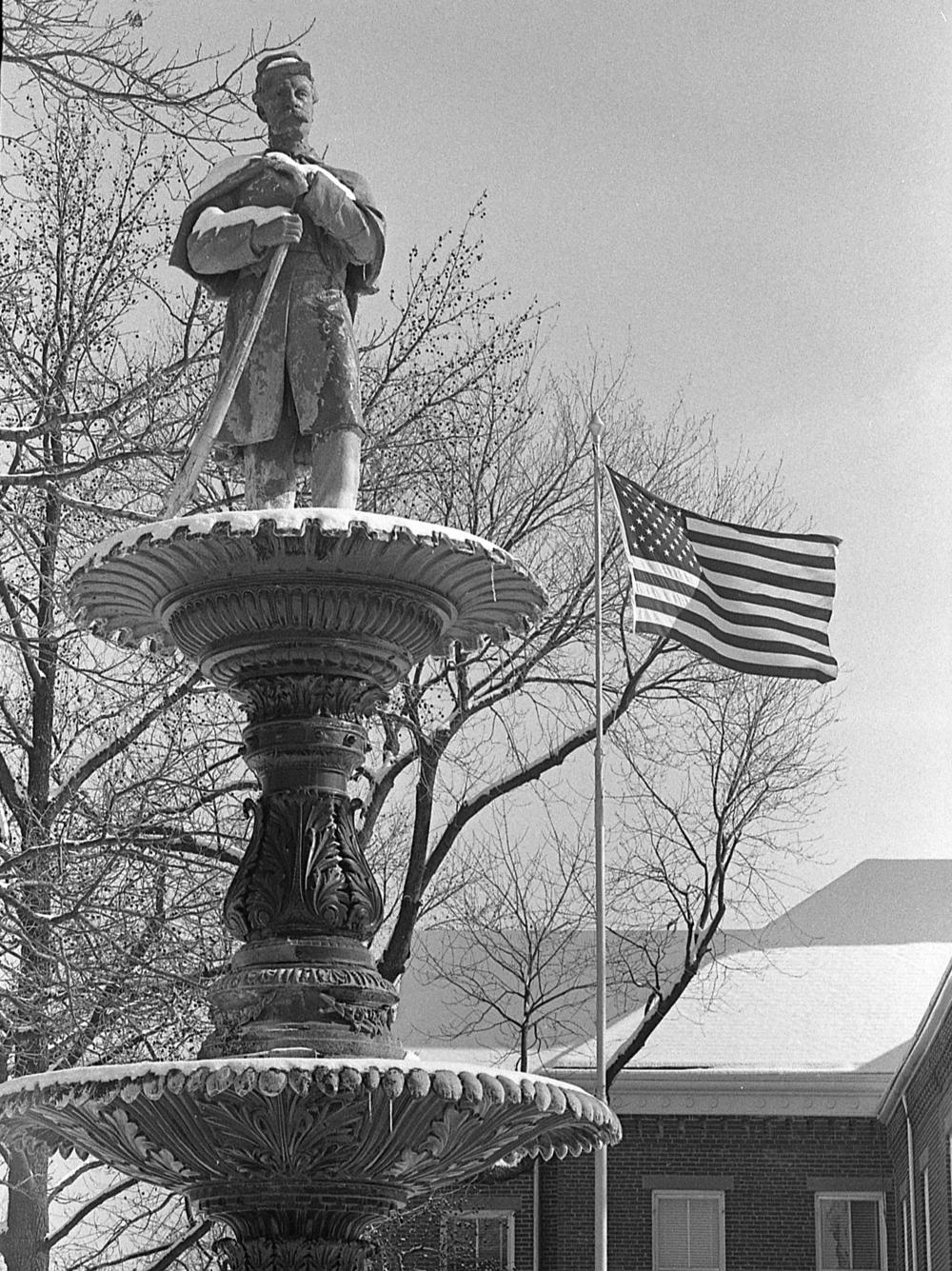 The original statue of a Civil War soldier atop the fountain at Common Pleas Courthouse Park was photographed in January, 1982. The present statue is a replica of this one. The first statue was erected Memorial Day in 1911, 50 years after the start of the Civil War. It was purchased by the Women's Relief Corps. A limb from a nearby oak tree fell onto the cast iron statue on May 12, 2003, smashing it to smithereens. The stories below from the Southeast Missourian detail the statue's demise and its restoration. This link shows the process of replacing the statue by sculptor Alan Gibson: 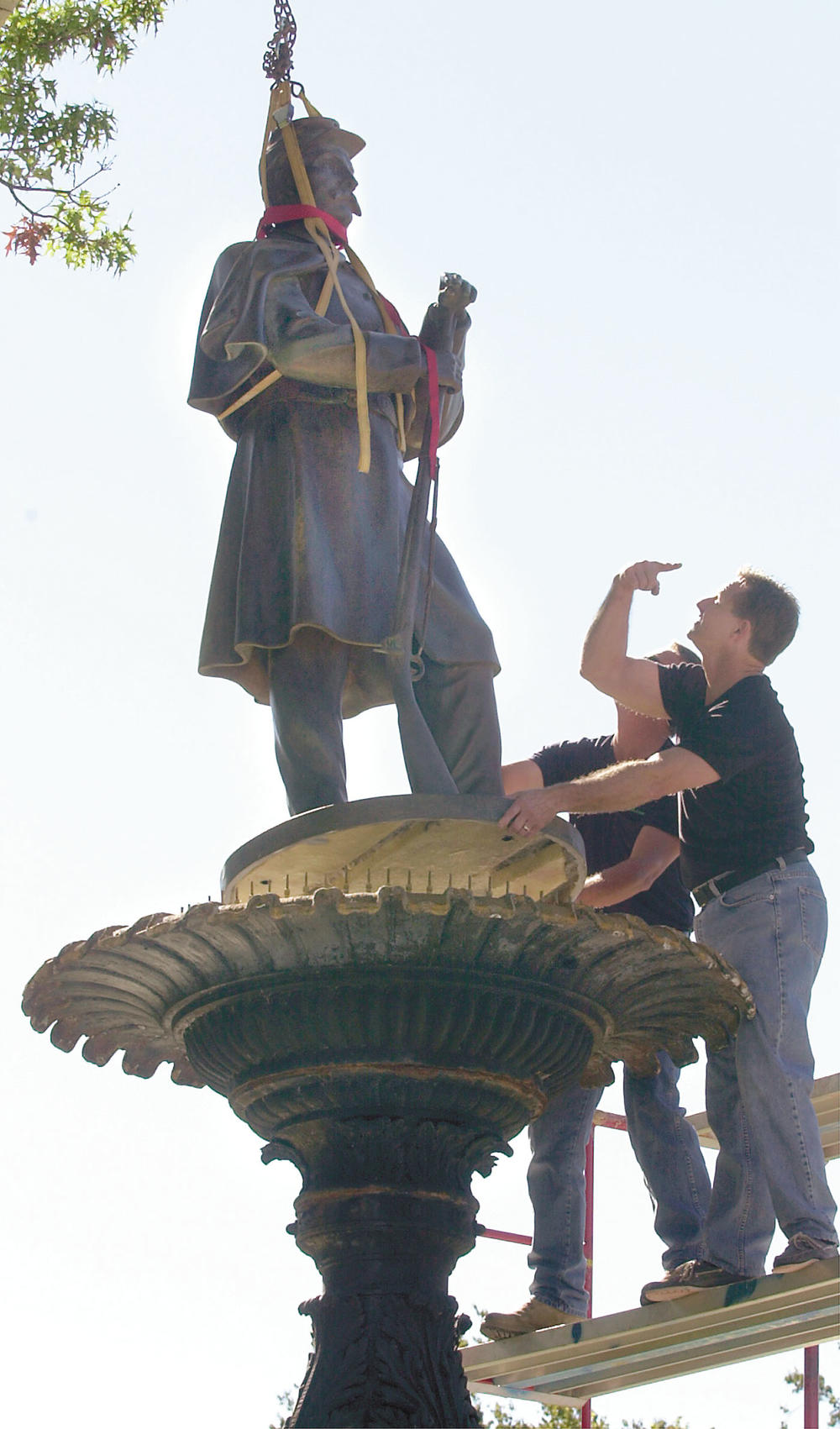 Alan Gibson directs the replica of the original statue into place on the fountain at Courthouse Park on Sept. 5, 2003. (Fred Lynch photos)

Fate of Civil War statue yet to be decided

There it was Monday morning, hardly believable to the eyes.

The Civil War soldier that has watched over Themis Street in Cape Girardeau with his stern gaze for 92 years was in pieces on various platforms of the fountain that supported him.

Apparently, a tree limb snapped and scored a direct hit on the soldier. Only the boots remain.

The statue, which depicted a Union infantry soldier standing guard with his musket, was placed in the Common Pleas Courthouse park area by the Women's Relief Corps, an auxiliary to a Civil War veterans group. It was dedicated on Memorial Day in 1911, 50 years after the start of the Civil War.

It didn't take long for word to spread throughout the city that the statue had been severely damaged.

Curious onlookers walked and drove by the courthouse to see the broken statue that for so long has been a part of downtown Cape Girardeau's scenery.

County crews acted quickly to clean up the mess and the offending limb.

Already there is talk about what person or group will take on recasting the statue. It's certainly worth restoring a piece of the city's historical landscape.

The Union soldier that looked over Cape Girardeau for 92 years will make another stand.

The Cape Girardeau County Commission this week awarded a contract to Dexter sculptor Alan Gibson to repair the Civil War memorial fountain statue, which was erected on the Common Pleas Courthouse lawn in 1911 and then was knocked over by a fallen tree limb on May 12 of this year.

The soldier broke into about 200 pieces and at first, county officials didn't know if it could be repaired or not.

"I saw it on KFVS and they mentioned it was unrepairable and I said, 'I don't think so,'" said Gibson, who has been a sculptor for 25 years. "So I made an appointment with the commissioners to take a look at it."

Gibson, whose most notable artwork is of a jockey on a horse in front of the Hot Springs, Ark., race track, took the pieces and put the statue back together like a jigsaw puzzle, he said.

He'll make a mold of the statue and recast it. He said the new version will be an identical match.

"I have the statue almost all together right now," Gibson said. "It took some time, but the most time-consuming part will be making the mold."

The statue depicted a Union infantry soldier standing guard with his musket. It was erected by the Women's Relief Corps, an auxiliary to a Civil War veterans group. It was dedicated on Memorial Day in 1911, 50 years after the start of the Civil War.

"I think we have an obligation to the people who put it up originally to restore it," Gambill said.

The statue has been repaired and restored before.

Statue in Courthouse Park will be revived

It was a shock to look across the Common Pleas Courthouse lawn in downtown Cape Girardeau on May 12 and find the familiar Civil War soldier in pieces around the fountain he once graced.

He was the victim of a wayward tree limb broken off by a gust of wind. At the time, many individuals who saw the statue's remaining pieces said there's no way he could be reassembled.

Dexter sculptor Alan Gibson has reassembled the cast iron statue. Unfortunately, that one will never return to its post in the park. Instead, Gibson will use it to cast another statue.

The soldier has an interesting history. First erected in 1911 by the Women's Relief Corps, he stood until 1971, when it was vandalized and later repaired. By 1982, he was in such disrepair that Cape Girardeau firefighters stepped in and did a restoration project.

Now this. The Cape Girardeau County Commission will spend $13,200 restoring the piece.

As long as commissioners are addressing one piece of historical art in Courthouse Park, why not look at the Confederate memorial? It has been placed in front of the fountain near the sidewalk. It seems somewhere else would make the park's memorials more balanced.

There wasn't much fanfare to the new Courthouse Park statue's unveiling.

Dexter, Mo., sculptor Alan Gibson yanked off a black piece of cloth Friday in front of a small audience of Cape Girardeau County officials and a few curious bystanders. There it was: the Union soldier, an exact replica of the one erected in 1911.

The old statue, made of cast iron and purchased by the Women's Relief Corps, was smashed to smithereens by an oak tree limb on May 12. In June, the county handed the pieces to Gibson, who assured officials he could replicate the statue. They said they were doubtful.

Gibson painstakingly matched 200 pieces together. He used them to make a rubber mold, then he cast the statue in polyester resin, coated it in bronze and chemically aged it.

The results astounded those who attended the unveiling at the park, which surrounds the Common Pleas Courthouse in downtown Cape Girardeau.

"It is beautiful," said Donna Burk, administrative assistant to the county commission. "I am amazed. I can't believe the job he did, and the neatest part is that he volunteered for this."

Several onlookers posed for pictures with the soldier while others watched from shaded benches.

"This is an element of history for Cape Girardeau, and it's appropriate we be here to honor this moment," said Dr. Fred Goodwin, a retired dean at Southeast Missouri State University, sitting under the oak that caused the disaster.

County workers helped Gibson put a makeshift harness around the statue, then it was lifted with a bucket truck. Gibson shimmied up some scaffolding to help ease his creation into place above a fountain. It faces southwest, which is the way the old statue faced, Gibson assured onlookers. The statue was bolted into place.

He took some artistic liberties with the replica. The old soldier didn't have feet, just ankles that went straight into the pedestal. The new one has boots.

It also has a plastic tube inside containing Wednesday's Southeast Missourian and an article about Gibson that ran in The Daily Statesman of Dexter, Mo.

"Another tree will have to smash this statue if people want to get that out," Gibson joked.

Don McQuay, county building and grounds superintendent, said workers will paint the fountain to match the statue's color and then turn the water back on. He didn't have a date for the painting work.

County Commissioner Joe Gambill said 75 percent of the $13,200 bill for the statue will be paid by Federal Emergency Management Agency disaster relief funds, with another 10 percent covered by State Emergency Management Agency funds. He said the initial cracks to the structure occurred when the limb hit it during May 6 severe weather that rumbled through Cape Girardeau County. The statue didn't crumble until six days later.

The old statue may be fully put back together and placed inside the Common Pleas Courthouse, Gibson said.

Ken Steinhoff posted a blog with a picture of the put-back-together statue that is on display on the top floor of the Cape Girardeau County Courthouse in Jackson. Here is the link: