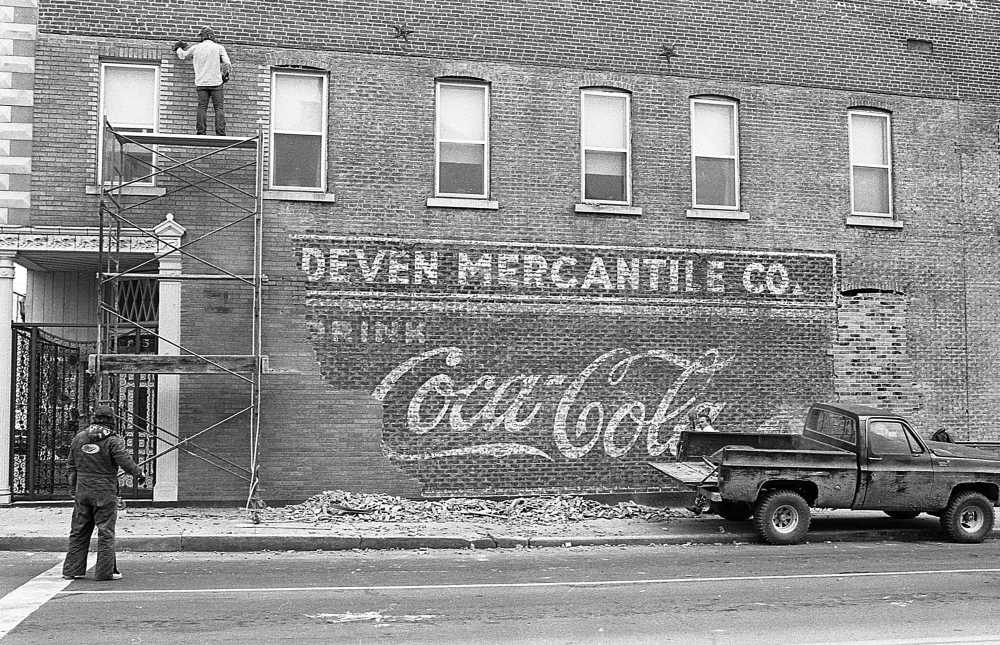 Workers with Fitzsimmons Tuckpointing tear off the brick veneer surface on the Craftsman Office Supply building to reveal a 50-year-old Coca-Cola sign. The workmen are preparing to sandblast the building this week. (Mark Sterkel photo)

Renovation uncovers 50-year-old sign on side of local business

CAPE GIRARDEAU - A hidden treasure was found by renovators at Craftsman Office Supply, 835 Broadway, last week. As they were tearing a brick veneer off the building, they discovered an old Coca-Cola advertisement painted on an original wall.

Bob Bohnsack, president of Craftsman Office Supply, said the sign is estimated to be about 50 years old. "But we're just guessing," he said.

"Years ago when this was the Vandeven Mercantile, they put a veneer brick front on the building," Bohnsack said. "We don't know why they did it, but the brick was beginning to come off, so we decided to take it all off and renovate the building."

As workmen removed the brick, the sign was discovered. "It's a piece of the history of Cape," he said. "But we will not be saving the sign."

Bohnsack explained that the sign is not in very good condition and would have to be repainted.

"Workmen are supposed to start sandblasting the building the first of the week," Bohnsack said, indicating that individuals interested in seeing the Coke sign should do so soon.

"We're going to restore the building back to he original way it was back when it was the John A. Vandeven Grocery, back when Cape had dirt streets and horses," Bohnsack said.

John A. Vandeven, a Cape Girardeau businessman around the turn of the century, moved his store into the building in December of 1906. The store was operated in the building by the Vandeven family until 1969. It was later bought by Craftsman Office Supply, located there now.