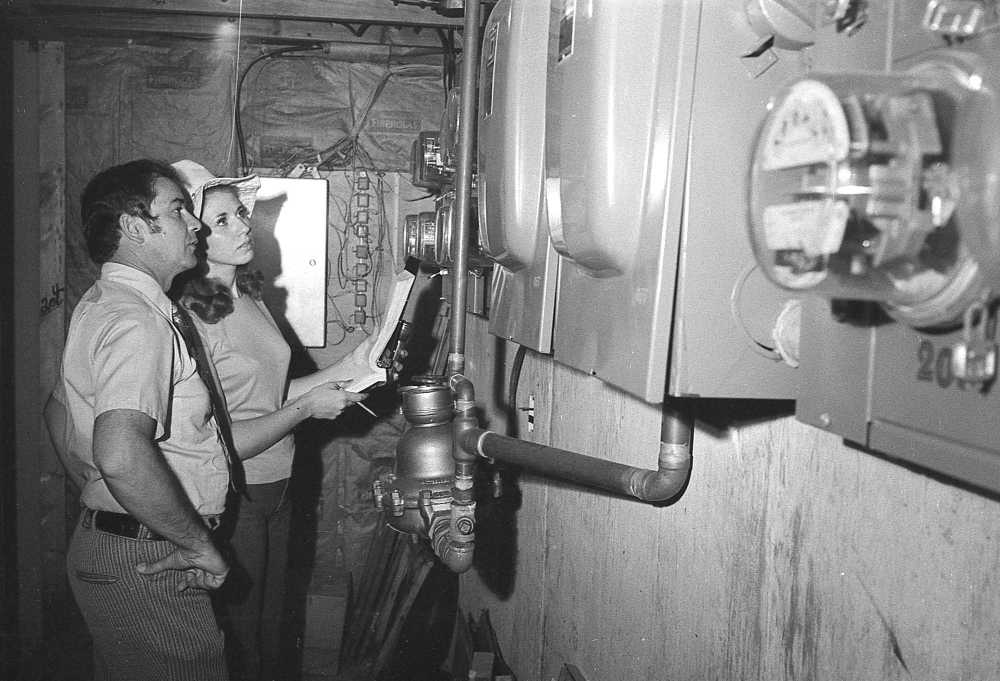 The first woman meter reader in Cape Girardeau, Miss Janet Crites, is learning the ability to subtract is a must in determining the amount of various utilities residents have used in a month. Her instructor is Jimmie L. Smyth, district manager for Missouri Utilities Co.

First woman meter reader to 'lib' it up in Girardeau

She's that gal about town.

She might be seen scanning the yards, the basements, the closets or even the manholes, but she's only looking for those utility meters.

She's the first and only woman meter reader in Cape Girardeau.

Miss Janet Crites, 24, will don her jeans, shirt, hat and walking shoes Monday as she begins her new duties with Missouri Utilities Co., where she has been a clerical worker for 2 1/2 years.

For the first month, Miss Crites will accompany the man meter reader she is replacing, Bob G. Andrews, who will then work in another department of the company.

Mr. Andrews will take her through the various routes to which she is assigned and the next month, Miss Crites will be on her own.

"I really don't think I'll have any trouble," Miss Crites said in discussing possible situations that a woman alone might encounter in going into basements or other areas of homes, businesses or other buildings strange to her.

The 5-foot-9-inch, 140-pound young woman with brown hair and green eyes not only has her faith in people to shield her as she strikes another first for women's lib, but also her self-defense lessons.

Miss Crites said she enrolled in the akido lessons before she submitted her letter of interest in the job as meter reader, but now she is glad she has the lessons, "although I hope I will never have to use them."

When a position is open at the utilities company, a notice is posted on the bulletin board to give employes a chance to express their interest in it.

"During by 2 1/2 years with the company, once in a while someone would jokingly remark, 'Why not a woman meter reader?' They would tell about the danger of dogs, about the cold and hot weather and all the walking. I don't think anyone seriously thought about a woman applying for the job," Miss Crites said.

She did apply and when she took a day of her vacation to accompany a man meter reader on his routes, she said, "I think this was when the company thought I was really serious."

Miss Crites said she felt the job would be a challenge, good experience and that walking would be healthy. "You have a car, but you generally park it on a street and walk from house to house or building to building," she said.

She doesn't anticipate any difficulty in reading the meters and plans to wear insulated underwear if necessary in winter to ward off the cold.

Miss Crites, the daughter of Earl Crites Jr. and the late Mrs. Crites, said she is taking a lot of kidding. Her father and her boyfriend both said if that is what she wants to do, that is what she should do.

"My grandmother, Mrs. Earl Crites of Gordonville, is an active senior citizen and she is tickled about my new job. She said, 'I guess that will show some of these men.'"