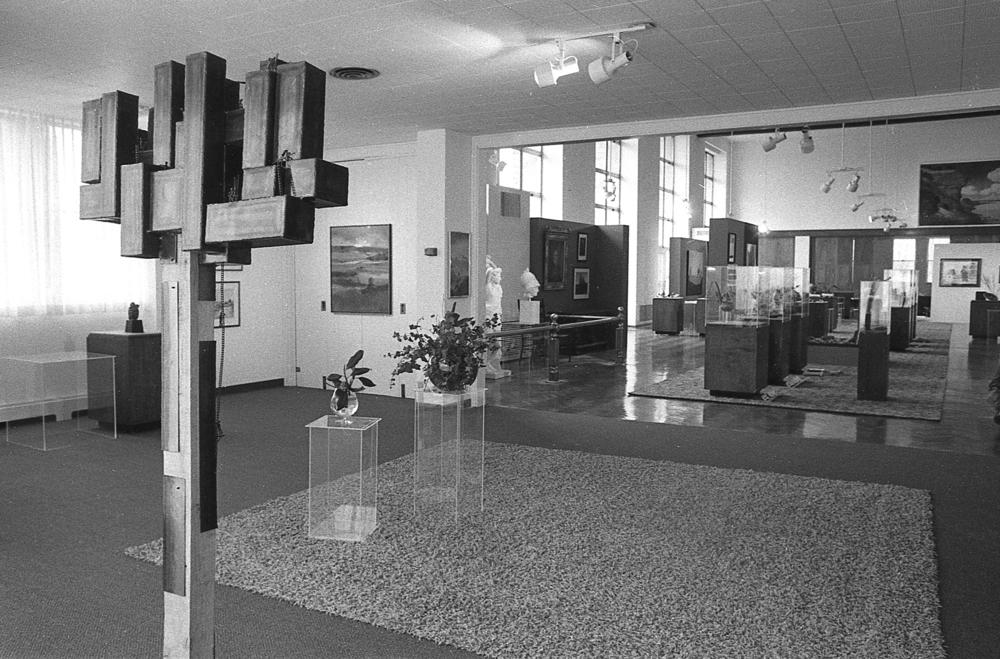 The new SEMO State University Museum, a contemporary setting for a glimpse into the past. Below, museum director James V. Parker holds an Apache basket, a contrast to the bright, contemporary art hanging above it. 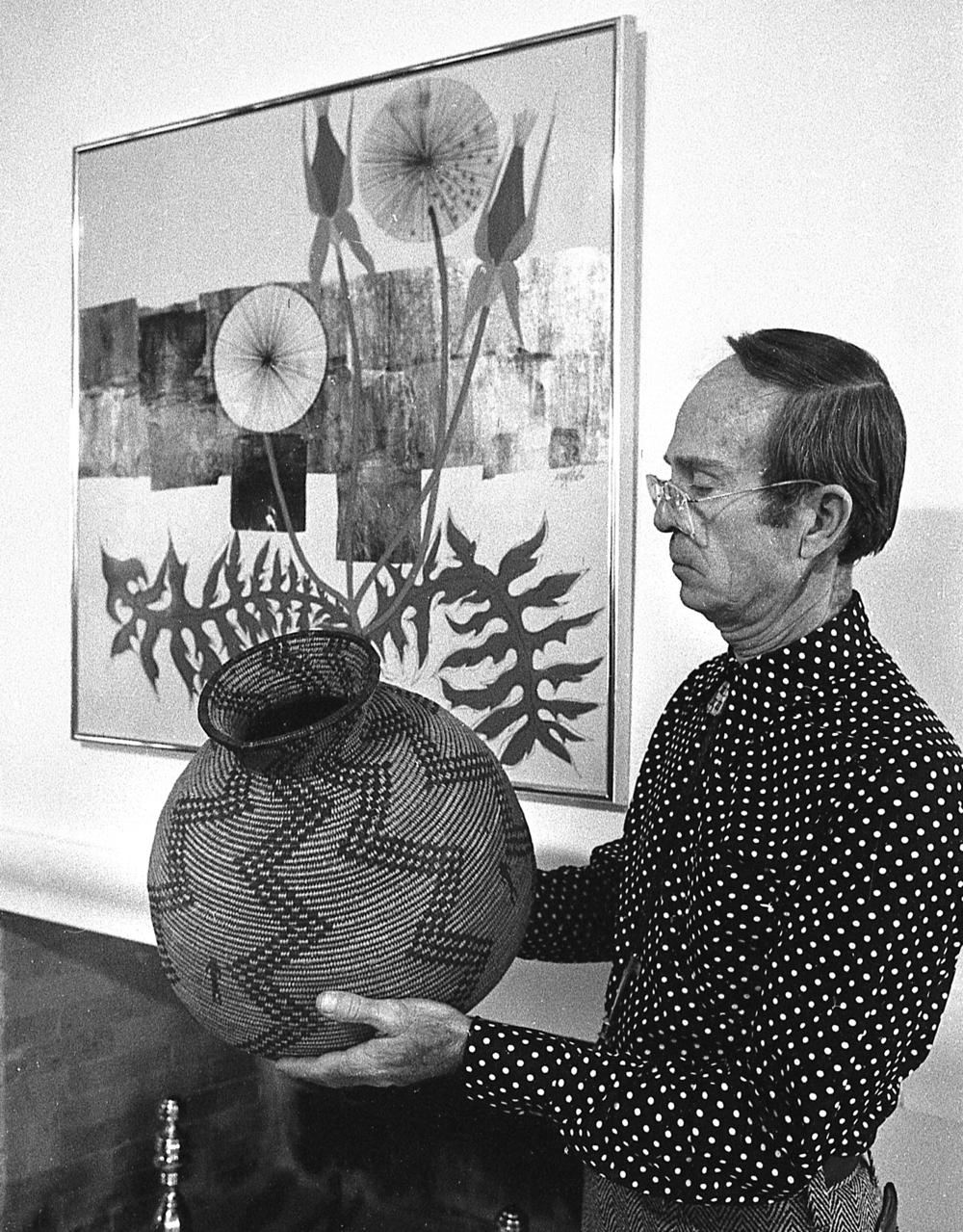 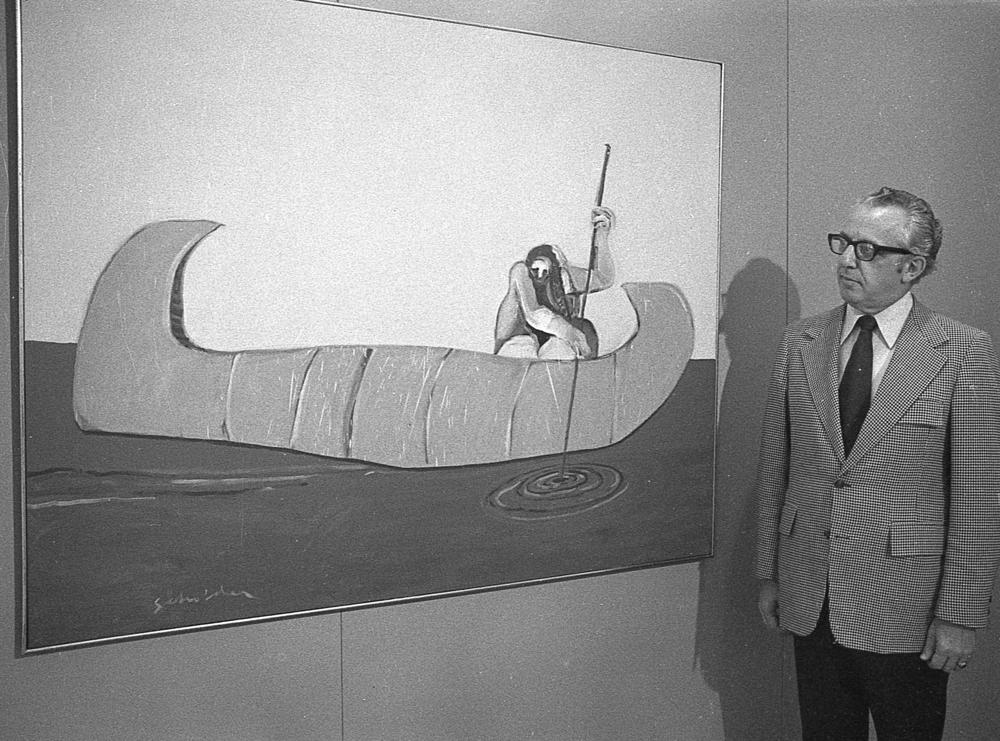 Dr. Robert E. Leestamper, president of SEMO State University, admires one of the museum's major works, "Indian in Canoe," by Fritz Scholder. Below, pieces from the Beckwith Collection, a museum focal point. 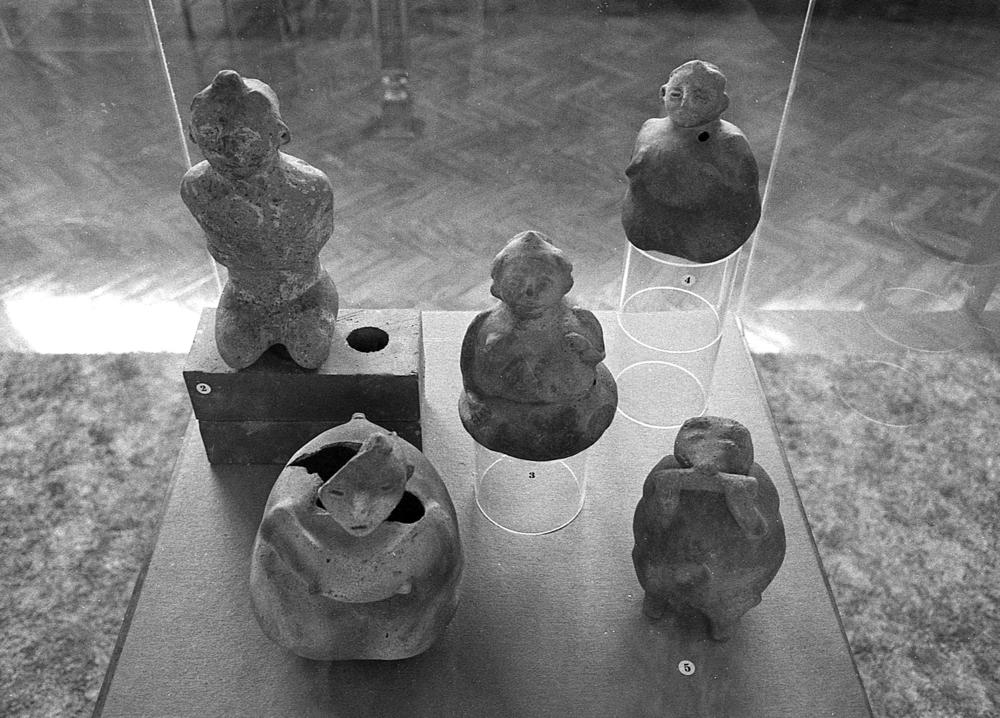 SEMO museum key to the way we were

Looking at the ancient water bottles, the ceremonial pipes, the effigy bowls, the shell necklace,the clay beads, the hoes and arrow points, one can almost see the Mound Builder Indians going about their daily tasks in a civilization so old that today it seems almost unreal.

But it was real, some 400 years ago, and the primitive, yet classic, simply beauty of the remnants of a civilization that thrived in the swampy lowlands of southeast Missouri and northeastern Arkansas have passed along to today's civilization a glimpse of a culture that disappeared in the mid-1500s.

Thomas Beckwith would be proud.

A past which he so diligently worked to preserve has now truly been given to an interested citizenry.

The pride that Beckwith would undoubtedly have felt would likely have been shared with others. Dr. Samuel T. Floyd, whose Civil War surgical kit saw lifesaving service on the battle fronts; Nora Naeter, whose fan collection is illustrative of some of the finest examples; Louis Houck, who anonymously presented in 1904, 58 pieces of classical statuary from the Louisiana Purchase Exposition.

There's a place now where these items, some of them packed away in closets for years, can be appreciated by everyone.

That place is the SEMO State University Museum, which Monday will open to the public in airy, contemporary surroundings in what used to be the Memorial Hall ballroom. Hours will be from 10 a.m. to noon and 1 to 5 p.m. Monday through Friday.

James Varner Parker, museum director who came to the university last spring from the Heard Museum in Phoenix, Arizona, with which he was associated since 1957, has arranged displays in the museum to complement each other by subject, blending the past with a touch of the present through careful use of various dried materials.

During the nearly six months Mr. Parker worked on the basics of cataloging and the like, more than 2,000 items were defined as part of the museum's makeup.

In the main gallery, Mr. Parker and those cooperating with him in the museum project, have utilized predominantly white walls with muted color accents that display pieces to their best advantage. In a smaller Fine Arts Gallery where paintings of SEMO art graduates are displayed, warmth is given the room both in accent touches and with a gracious fireplace.

Displayed in the museum now (exhibits will be rotated regularly so that as much as possible can be offered for viewing) are a portion of the vast Beckwith Collection, other Indian artifacts, antique firearms, folk and fine art, fine paintings, historical items from the Revolutionary and Civil War, several pieces of statuary from what was "Statuary Hall" in Academic Hall, a portion of the Nora Naeter fan collection and other items.

It is the Beckwith Collection of artifacts of the Pre-Columbian civilization that has center stage at the museum. Of tremendous historical value, Mr. Beckwith presented his collection to the university in 1913. He had collected and cataloged the artifacts over a period of about 40 years.

Most of the pieces came from his father's plantation near Charleston, where at one time the large mounds of light red or white clay were regarded as refuge for stock in times of high water.

Although books recall that Beckwith had little formal education, his father deeming it "more important to make him a man of affairs rather than a scholar," he nonetheless produced a significant archeological contribution.

The Beckwith Collection, which contains about 1,100 items, is considered one of the largest and most outstanding collections of effigy pieces to come from a single, limited area, Mr. Parker said.

The collection, which most recently was housed in Kent Library, contains bowls, water bottles and vessels with primitive male and female figures. Many pieces feature animal forms, and there are also a small number of miniature pieces, presumably children's.

"We feel we've gone a long way," Mr. Parker said in discussing the museum's progress. "The museum is community oriented as well as faculty and student oriented."

The museum expects a number of school children as visitors. Mr. Parker said he hopes to design a program for schools, and that his philosophy in taking children through any museum is that "you've motivated them if they remember one item, no matter how major or minute. You have succeeded."

Putting the museum together (the entire Memorial Hall renovation took place in exactly a month), Mr. Parker praised teamwork on the part of all those involved. Projected for 1978 is addition of a balcony, thus providing more space and allowing for the booking of shows.

A major piece of art in the museum is a painting, "Indian in Canoe," by Fritz Scholder, a gift to the museum by Dr. and Mrs. Rex Peterson of Paradise Valley, Arizona. A second major gift is a painting titled, "Some Died Along the Way," painted and donated by artist Valjean Hessing of the Choctaw tribe.

It is particularly appropriate because of this area's historical connection with the "Trail of Tears."

A frank admirer of Indian art, Mr. Parker feels strongly about emphasizing Indian heritage in this area as well as in the southwest part of the country.

"I think it's unfortunate there is no Indian culture or history in the public schools in Missouri," he said. "With the Mound Builders, we have a heritage in our locale."

The hours Mr. Parker and his helpers have spent on the museum have been long. The director has painstakingly cleaned dirty oil canvasses on paintings in storage for years, and a portion of the solid brass railing from Statuary Hall was buffed by hand. "It was blood, sweat and tears, but enjoyable," he commented.