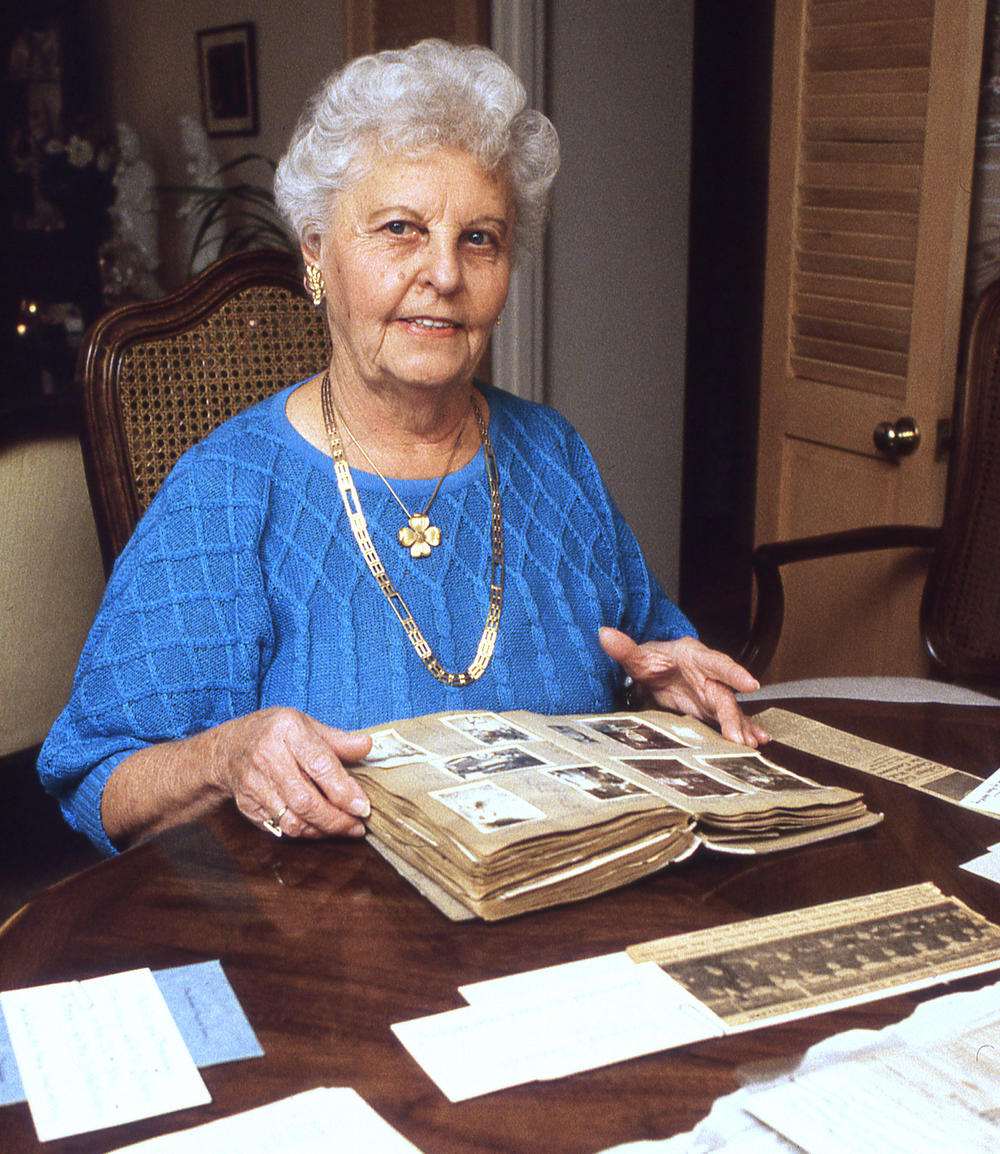 Aleen Vogel Wehking, a member of the former Southeast Missouri Teachers College "Tomahawks" pep squad of the 1920s, thumbs through a scrapbook containing memories of her college days, in this photo taken in December, 1986. Through the years she has continued to attend university events and supported the university in several other ways, doing whatever she can to help promote school spirit.

CAPE GIRARDEAU - Aleen Vogel Wehking has always considered SEMO University an important part of her life. The native Cape Girardean practically grew up on campus when it was the Southeast Missouri Teachers College. As a child, the campus was her playground. She got to know many of the professors and students, and she developed an early loyalty to the college.

It was only fitting, therefore, that she chose to attend the college which so significantly influenced her early life. She enrolled there in 1925. Illness interrupted her studies but she graduated in 1932.

It also was fitting that her freshman year was the year the university "Tomahawks" and "Scalpers" pep clubs were formed. She jumped at the chance to be involved in the "Tomahawks," the girls' pep group, and was its first president.

University spirit was great in those days, recalls Wehking, who through the years has continued to contribute her part to school spirit and pride. Seldom does she miss a football or basketball game. And when she does, the fans who have grown to love her, want to know why.

In the 1920s, says Wehking: "We had great spirit. The student body was a small group, fewer than 500. Everyone knew each other. They really got into the games."

In the early days, the "Tomahawks" and "Scalpers" led the cheers during the football games which were played in Capaha Park, then the old Fairgrounds Park, recalls Wehking. They performed at halftimes with a variety of routines.

She recalls the pep squads did a lot of routines similar to those done by cheerleaders today. But, she quickly added, "We didn't make pyramids. We cheered and marched," she said, likening their performances to precision marching bands of today, without the instruments.

She recalled the "Tomahawks'" pride when, in November 1925, its 24 members received their red sweaters with black letters that spelled out the group's name across the front. The sweaters were worn with white pleated skirts and black and red beanies, she recalled.

The two groups were formed under the direction of M.L. Diekroeger of the college's science department. Members of both groups were chosen for "their pep and Indian spirit," notes a Sept. 29, 1926 issue of "The Capaha Arrow."

"The cheers were a lot different in those days than they are today," recalled Wehking. "But they do a few of the same drill routines we used to do. They look a lot different, of course."

Their spirit was exuberated at the games as they led cheers for victory with "On Old Indians" sung to "On Wisconsin."

The then-popular "locomotive yell" also was among the groups' favorites. They encouraged enthusiasm in the stands with special renditions of such songs as "Hail, Hail, the Gang's All Here," and "There'll Be a Hot time in the Old Town Tonight."

Many of the games were preceded by "snake dances" down Broadway, during which the pep squads could arouse the spirit of the entire community through their routines, songs and cheers.

A line from Wehking's 1926 Sagamore, the university yearbook, puts the pep squads' role in proper perspective:

"Whenever any organization in school was in need of pep, the Tomahawks and Scalpers fell in line. There was a spontaneity, a wholesome and whole-hearted gladness, and a refreshing willingness about the spirit with which the Tomahawks undertook tasks assigned to them that will make the organization live in the minds and hearts of those who watched the girls during the first year."

With Wehking at the helm, the group continued to lead battle cries until 1930, when Houck Stadium was readied for use and the college trend moved toward cheerleaders rather than pep clubs.

Wehking enjoys many university-related events. She frequently attends concerts and performances at the university, which, she said, "has some very fine cultural events. I think more people should get involved in the university."

She also is a contributor to the Southeast Missouri University Foundation. A scholarship in her name is awarded each year to a student whose spirit is demonstrated by involvement in various activities.

Wehking says as long as she can continue to be at SEMO basketball and football games, she'll be there doing her part to keep university spirit alive. She already has tickets for university basketball games in the new multipurpose building, where the Indians will play beginning next year.

If you're one of the fans who is fortunate enough to have seats near her in the new building, you'll quickly discover what many other SEMO fans have discovered through the years.

The university's alumni center was named the Aleen Vogel Wehking Alumni Center at 1401 N. Sprigg St. In 2007, the alumni center moved to the former First Baptist Church at 926 Broadway.