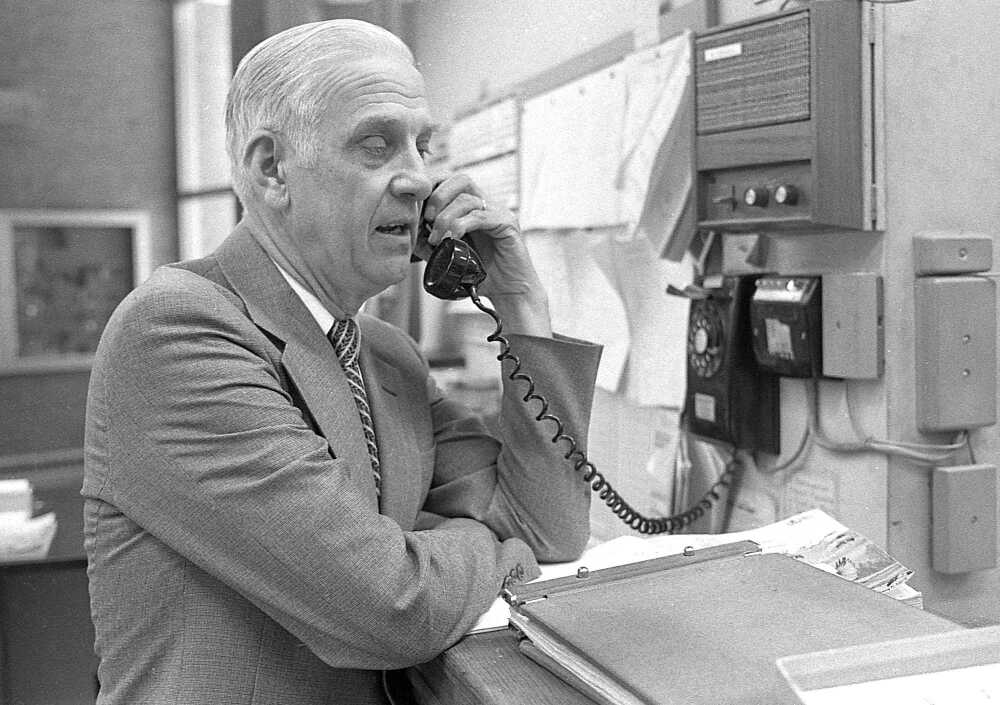 Wilver Wessel, Cape Girardeau postmaster, will come to work for the last time Jan. 8. Wessel, 62, is retiring after more than four decades of service with the U.S. Postal Service, all of it in Cape Girardeau.

Ever since he was 19, Wilver Wessel has been a slave to the alarm clock. For 44 years it has stirred him from sleep at hours familiar to quick-shop clerks, hospital nurses and policemen.

He has worked regular shifts beginning late at night, early in the morning and in the middle of the afternoon. But beginning Jan. 9, Wessel's life will no longer be regimented by the dreaded sound of an alarm. The 9th will mark the first day of retirement from the U.S. Postal Service for Wessel, who has served as postmaster here for the past eight years.

However, he's reluctant to use the word retire. He thinks it has some bad connotations.

At 62, Wessel is an articulate, distinguished-looking man with a full head of gray hair and a wealth of wisdom collected over more than four decades as a Postal Service employee.

His career with the Postal Service began in 1938 when he took a government test necessary to become a postal carrier. Wessel took the test not because he wanted the job, he says, but because he liked tests. He took the exam, therefore, out of simple curiosity. He obtained the highest score among those who took the test and was offered a position as a substitute carrier. He took it and has been at the Cape Girardeau Post Office ever since (with the exception of short stint in the Army).

During his career at the post office he served in almost every position there and worked his way up through the ranks.

He was named officer in charge after the retirement of former Postmaster Russell J. Fowler in 1972 and was appointed postmaster about a year later.

The government has been good to Wessel. He'll tell you that. He has earned a good salary over the years and the work has been a challenge. And, after all, the Postal Service has been his life.

But Wessel will not tell you he has no regrets about his unbroken career as a federal employee.

Like many others who have retired at the end of a long career, Wessel cannot help but think about what might have been.

Wessel was attending SEMO State University, then a teacher's college, back in 1938 when he went to work for the Postal Service and was considering a career in education.

But the Postal Service offered him 65 cents an hour, more than starting teachers were making, and the job was a secure one. Therefore, Wessel decided to give up college and join the working force. But the urge to attain a college education stayed with him.

While stationed in San Francisco in the early 1940s, Wessel said he seriously considered enrolling at Stanford University and obtaining a business degree. Instead, he returned to Cape Girardeau to continue his career at the post office.

"It's been quite an experience," Wessel says. "It's been a good place. But if I had it to do over again I may have used my G.I. rights to go to school."

The Postal Service has undergone a metamorphosis since he started his career. Stamps were only three cents then, mail was delivered twice a day, the post office staff here included only 25 people, and zip was something you did to your pants.

Wessel believes the institution of the zip code in July of 1963 was the single most important factor in the revolution of the mail service.

"Had it not been for the zip we would have been so deluged with mail by now that we would never have been about to dig out."

The mail service has been revolutionized in other ways also since Wessel started working at the post office, with the institution of such devices as computers and electronic transmitters, which allow companies to send documents and other correspondence electronically through the air waves.

"The next 10 years will be interesting. There will be a lot of changes. You never know, maybe some private company will buy the Postal Service," he says half seriously.

But Wessel will view the impending changes in the mail service as an onlooker. With much careful consideration, he has picked this time to retire. He tried to retire once before when he became eligible for federal retirement benefits, but he put it off and decided to work a little while longer. That was seven and a half years ago. However, this time the retirement is real.

"My wife wrote me a note the first of the year, and said that I was going to have to make a decision (on retirement) and that it was probably going to be the most important one I'd have to make. She's been hoping I'd decide to retire."

Now, the decision has been made.

Wessel is looking forward to retirement with zeal. Yet, he has no firm plans for it.

"You know the saying, 'never leave for tomorrow what you can do today?' Well, I'm going to reverse that. I'm not going to plan tomorrow until tomorrow comes. Who knows? I may even go back to school."