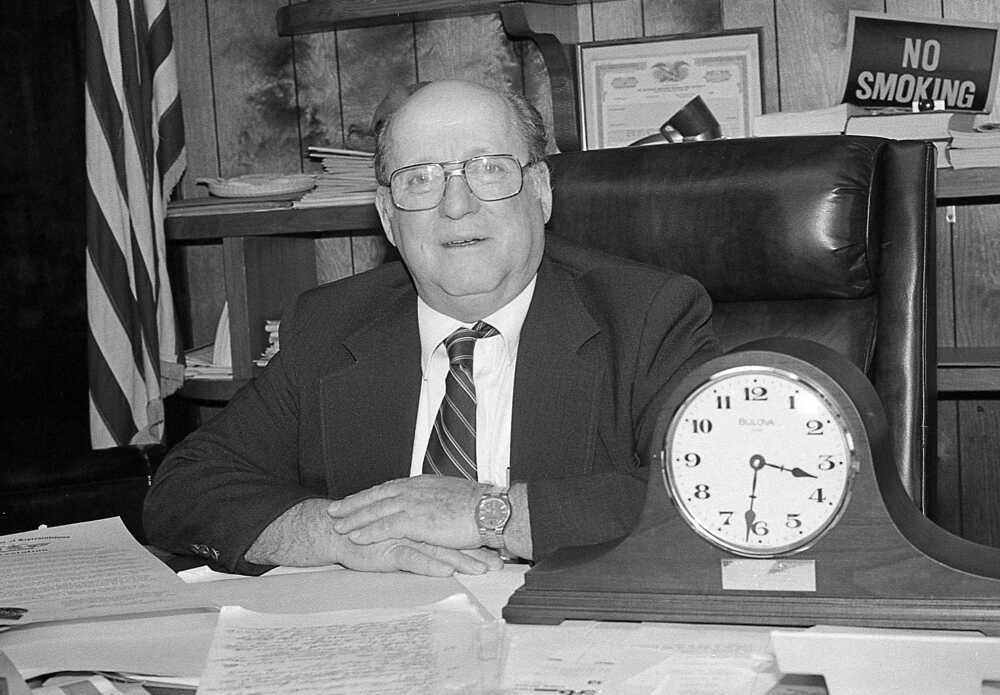 Louie Hirschowitz, retiring Scott County presiding commissioner, shows off a mantel clock he received Monday from county officials and employees in recognition of his 16 years of service in county government.

Hirschowitz is marking his time, vows a return to political life

For 16 years, Hirschowitz has been a fixture in Scott County government, the first four years as an associate judge (now called county commissioner) and the last 12 years as the county's presiding commissioner.

But when 1986 comes to a close at midnight Wednesday, Hirschowitz will return to private life.

It wasn't what he had planned. Hirschowitz had hoped to begin serving a new term, but a loss in the Democratic primary election last August changed all that.

Officials and friends dropped by the commission's chambers at the courthouse Monday to chat with Hirschowitz and say farewell.

But the 69-year-old Hirschowitz wasn't sounding like a person ready to step down.

"Who says I'm leaving?" Hirschowitz jokingly asked his colleagues on the county commission, a mountain of paperwork spread out in front of him on the commissioners' table.

"Louie didn't get a fishing pole or hedge trimmers for a going away present. I got a nice beautiful clock to mark time," he noted, referring to a mantel clock given him by Scott County officials and employees.

"Like (Gen.) MacArthur, I'll be back," he declared. Hirschowitz is looking at a particular office, but he is not yet prepared to discuss it publicly.

Comparing his life to a movie, the flamboyant commissioner vowed, "I'll still be in the (film) reels. It won't be any reruns. I'll be making a new serial."

Before embarking on any new political career, Hirschowitz plans to make a two-month trip to Alaska, accompanied by his wife. He noted he plans to set out in May in his camper truck for snowy Alaska.

"I want to see what's on the snowy mountains," he explained. Hirschowitz said he also would like to try his hand at panning for gold. "I got the shovel in the truck," he remarked.

"Like every American, I want to pan for gold like the gold diggers in the Klondike," he asserted.

Hirschowitz doesn't like the work "commissioner." He prefers to be called the presiding judge.

A state law, which took effect last year, renamed county courts as county commissions and replaced the county judge title with that of commissioner.

Despite that, Hirschowitz still likes to be referred to as judge. "It adds something to the office," he contended.

The bespectacled and balding Hirschowitz is fond of quoting Truman. A large portrait of Truman stares down from the wall behind the Scott County commissioners' table.

"The buck stops here," a famous Truman saying, is prominently displayed on a nameplate-sized sign behind the commissioners' table.

"I'm a great follower of Harry Truman. I work on the philosophy that government needs to be closer to the people," noted Hirschowitz.

The talkative commissioner reflected on his years in Scott County government in an interview with a Missourian reporter Monday, while at the same time conversing and joking with colleagues, answering phone calls and conducting county business.

Hirschowitz said he is proud of the fact that he was accessible to the public. "I think people were able to communicate with me anytime they saw me. I was a good listener."

Asked to name his biggest accomplishments, Hirschowitz is quick to cite his efforts on passage of a county sales tax and a Southeast Missouri Port Authority tax, as well as development of the port authority.

He is also proud of his role in promoting Scott County as the site for the Saturn automobile plant. While the county didn't get the auto plant, it laid the foundation for public support of economic development which resulted in passage of the port authority tax, insisted Hirschowitz.

The presiding commissioner noted he has worked to improve cooperation between the city governments and the county. He helped establish the Scott County Mayors Association and served as its first president in the early 1970s.

Hirschowitz also has been involved in the development of the Missouri Association of Counties and is a past-president of that group.

The outgoing presiding commissioner said he believes that Scott County government must play "a more important role in economic growth" in the future.

Hirschowitz contended that county officials should never forget the public relations aspect of their jobs in promoting the county.

He points with pride to the establishment of Scott County's beaverfest two years ago. "I came up with the idea of the beaverfest. It was the first barbecued beaver festival ever held in the United States," he noted.

Hirschowitz admitted he was criticized by some people for the beaverfest. However, he pointed out that the unique festival brought public attention to Scott County as a result of news media coverage throughout the nation.

But while Scott County may have many assets, including beaver, Hirschowitz said he knows that "the best commodity a county can have is its people."

Louie Hirschowitz did not return to political life. The former mayor of Oran, Missouri died in 2007. Read more in this Southeast Missourian story by Matt Sanders: