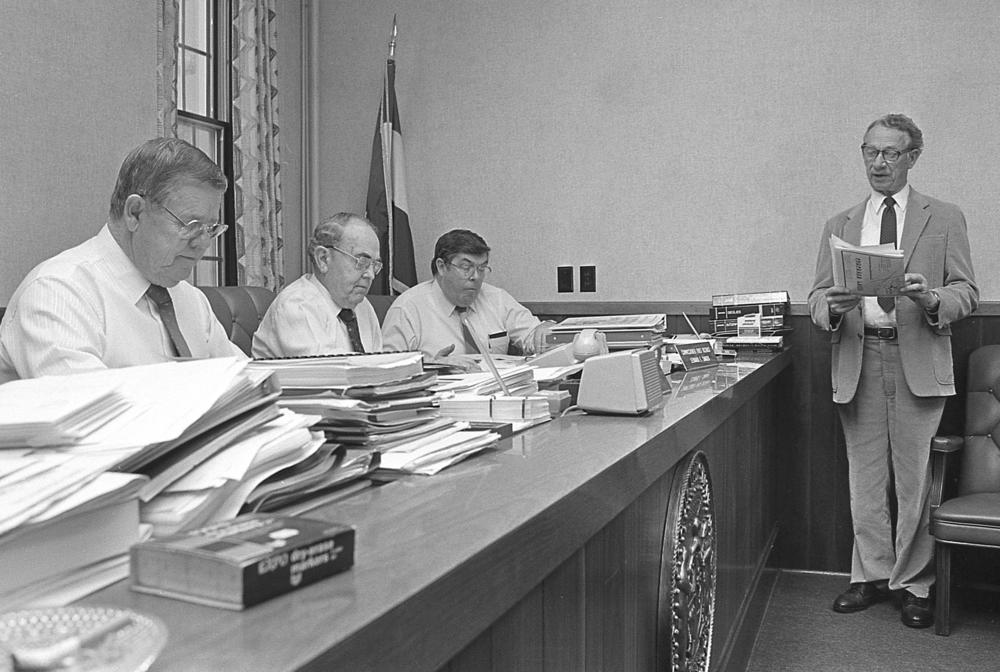 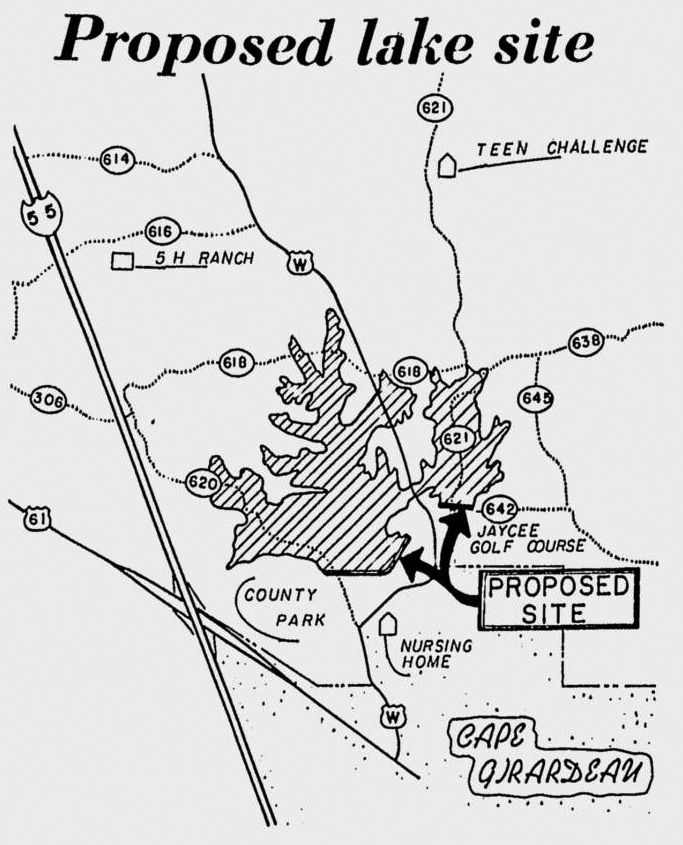 JACKSON - Plans for a proposed 1,250-acre community recreational lake complex that would be built at a cost of about $12 million along Cape LaCroix Creek, north of Cape Girardeau, were announced today by a group of Cape Girardeau and Jackson civic leaders.

The proposal calls for both branches of Cape LaCroix Creek to be dammed to provide two lakes.

The West Lake would be used for boating, water skiing, swimming and fishing, while the East Lake would be reserved exclusively for fishing, according to Meyer. Both lakes would be connected by a channel to maintain a constant water level between the two lakes, and to provide boating access from one lake to the other.

Meyer told the commissioners a group of business leaders in the two cities and other people from Scott County had been discussing the project for about 16 to 18 weeks, and were now asking the Cape County Commission to sponsor the project on behalf of the entire county.

"This is a show of our cooperation between the cities of Cape and Jackson," said Mayor Gene Rhodes. "We think it is a very feasible project."

In addition to its recreational uses, Meyer said the lake complex would also provide a source of fresh water for the future growth of the county, and a supplementary water source for Cape and Jackson.

"All of the preliminary engineering and hydraulic studies indicate the lake is a feasible project from both criteria," he commented.

Rhodes said the site of the proposed lake complex is in the same area that has been designated as a dry retention basin by the Corps of Engineers as part of the Corps' Cape LaCroix-Walker Creek Flood Control Project, which was approved, but not funded by Congress this year.

The preliminary estimate of the cost of the lake complex, which would include access from the North County Farm Park, is around $12 million.

Meyer told the commission that although no definite funding plans have been prepared, consideration would be given to requesting partial funding for the project from the Corps of Engineers, the Missouri Department of Conservation, and local utility companies.

Meyer and Rhodes said if funding is obtained, the project could be completed in five to ten years.

Presiding Commissioner Gene Huckstep praised the group for their efforts and promised, "We will take it under advisement and get back in touch with your group as soon as we can."

Huckstep said the commission would probably appoint a blue-ribbon panel sometime early next year to study the pros and cons of the proposed lake complex to see if a full feasibility study should be authorized. He added such a study would have to include funding participation from Cape Girardeau and Jackson as well as the county.

Associate Commissioner J. Ronald Fischer agreed that the only way the county could handle the request was to appoint the special committee to study the proposal. "There are so many questions at this point, that we could not say yes or no," he remarked.

Huckstep said one aspect of the proposal that impressed him was the accelerated degree of cooperation with the citizens of Cape Girardeau and Jackson and surrounding area. "It's a commendable action by all parties. We don't know where the project will go--or if it will go--but we will seriously study it," he promised.

Associate Commissioner Leonard Sander noted, "At this point, we have a lot of ends that must be tied together before starting such a project."

Fischer said the maintenance costs of such a large lake complex would have to be considered by the county, and noted, "One question is, would the cost justify the ends? What will you get back in return for the cost?"

Meyer noted the lake complex would give residents of the county a large, protected body of water for recreational purposes which has not been available, along with providing the potential for an added dimension for economic growth for Cape County.

Bob Hendrix, president of the Cape Girardeau Chamber of Commerce, said the proposed lake complex would have no negative impact on the current Cape LaCroix-Walker Creek flood control improvements.

The county commission was approached to sponsor the project because the lakes are located in the county, and not in either city, and because of the credibility the commission has with the citizens of Cape Girardeau County.

JACKSON - An advisory committee studying a proposed recreational lake in Cape Girardeau County had not planned to make a decision on the feasibility of a proposed site just north of the city of Cape Girardeau until its next meeting on Feb. 11.

But 75 minutes into the group's third regular meeting Wednesday afternoon, the committee began to reach a consensus that there were serious problems with the proposed site, and it might be better to begin immediately focusing their attention on other sites in the county.

Thirty minutes later the committee was polled by Chairman Charles Haubold and each of the nine members present, in their own way, raised various degrees of concerns. But in the end, all nine members agreed the proposed site was too costly for the size lake that would be developed, and it was better to start looking at other sites.

The committee also was unanimous in its support for a large recreational lake somewhere in the county or nearby and stayed another half hour to talk about other possible locations they could gather data on.

On Feb. 11 the committee will meet with representatives of the Missouri Conservation Commission and Corps of Engineers on potential lake sites in the county.

In a July 31, 1996 story in the Southeast Missourian, another lake proposal was discussed. This 7,680-acre recreational lake would be located near Millersville by damming portions of the Whitewater and Little Whitewater rivers. It was first suggested in 1987 but never reached voter consent. 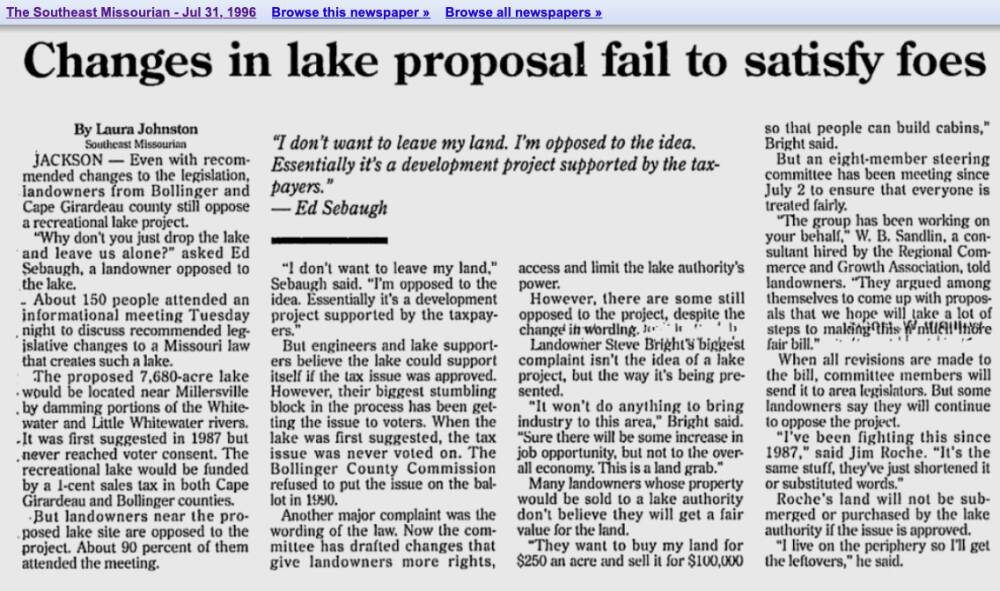