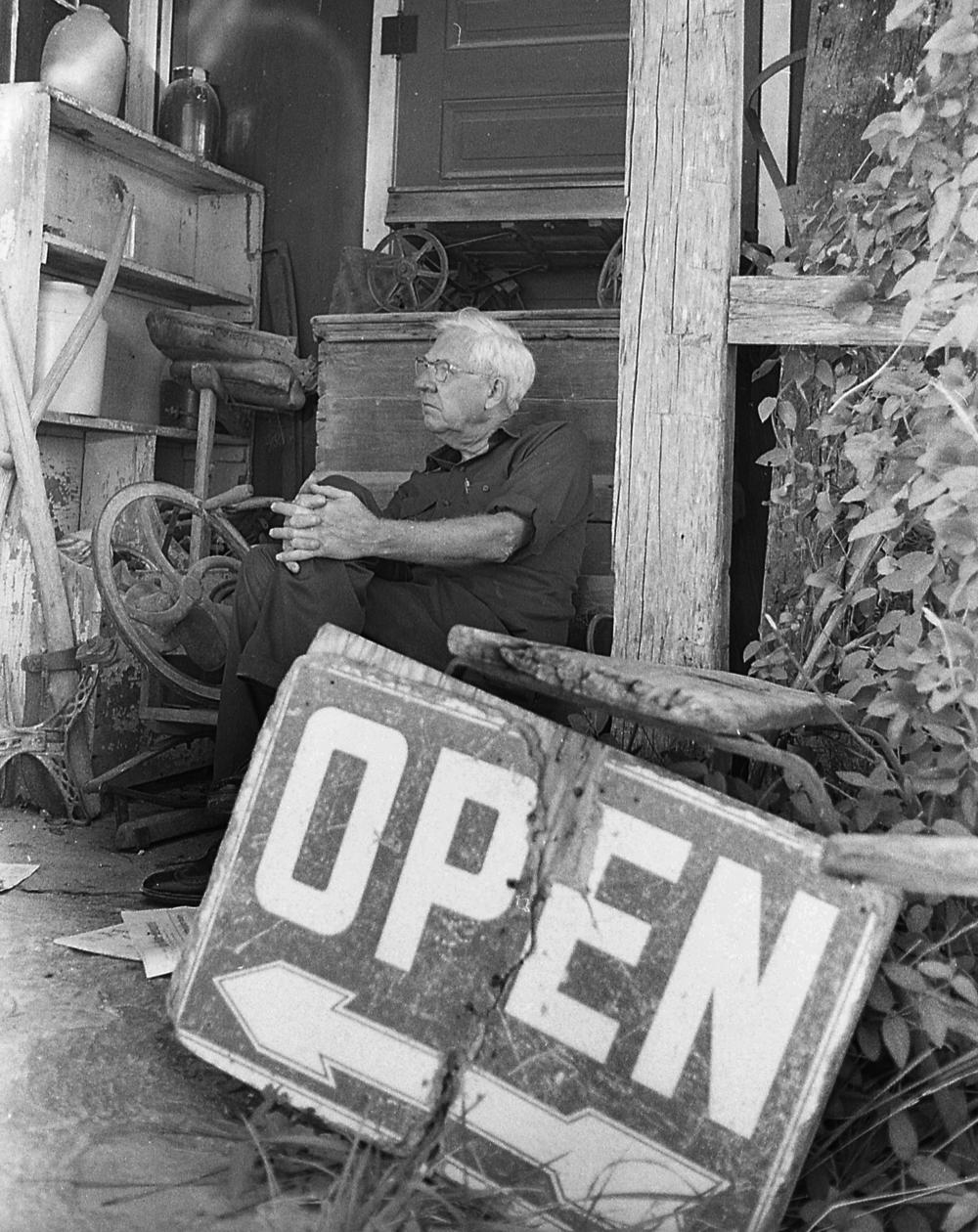 Opening of Interstate 55 from Fruitland to Brewer has curbed the heavy volume of business along Highway 61, but to some it offers long-awaited solitude. Orville Holcomb, above, owner of Holcomb's Red Barn, an antique shop three miles north of Fruitland, enjoys a relaxing moment outside his business without the steady hum of passing trucks and cars. Below, Howard McCain pumps gas at Cape County Oil Co., Fruitland, which reports an 80 per cent reduction in business. (Gordon L. McBride photos) 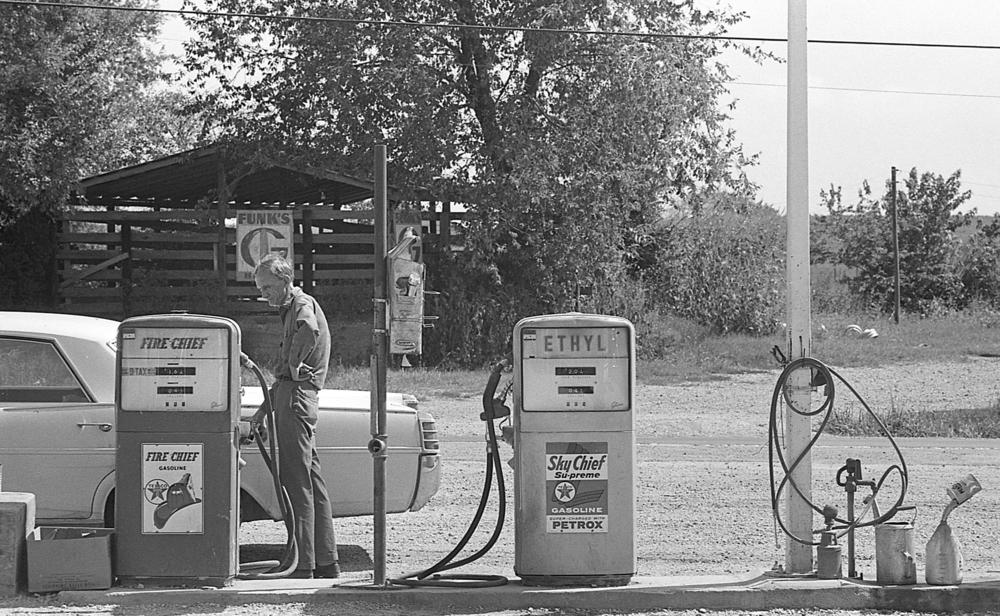 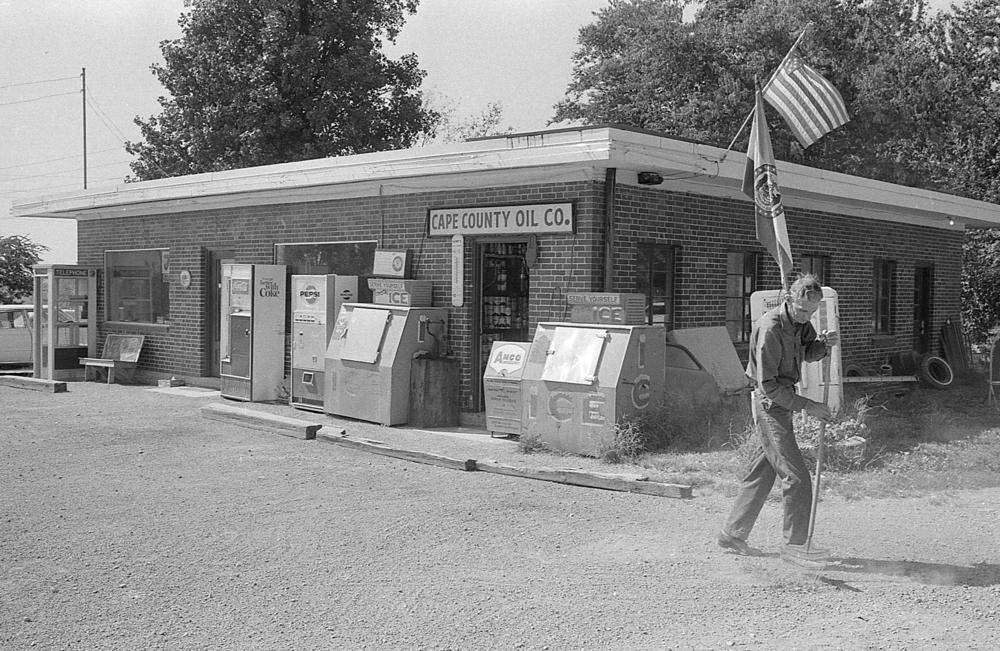 Like thousands of communities that over the past decade have been side-stepped by the opening of interstate highways, the half dozen towns along Highway 61 from Fruitland to Brewer have begun the transition. While the opening of the 29-mile segment of Interstate 55 on Aug. 30 means certain reduction in the amount of transit business, to most it means relief from the heavy volume of fast-moving traffic.

The real pinch will be on the businessmen--those who for years have enjoyed good profits from travelers using the old two-lane highway.

The majority of people who operate the cafes, gas stations, garages and motels that dot the stretch say business has fallen off 50 to 80 per cent since the superhighway opened a week and a day ago.

But some of the business owners admit that a return to slower-paced rural community living will be pleasurable.

As James Birk, owner of Uniontown Oil Co. and cafe, put it: "I kind of like getting to sit down for awhile."

While the majority of businessmen expressed concern over the decrease, most believe it is temporary and will pickup again within a month or two.

L.C. Jenkins, owner of Cape County Oil Co. and cafe at Fruitland, estimated that his business over the usually busy Labor Day weekend fell 80 per cent in comparison to the holiday period last year.

"I plan to ride it out and see what develops," Mr. Jenkins said. "I've heard others say that within 60 days or so some of our business will come back, that the people that have stopped here for years will find me again."

Mr. Jenkins, who has operated Cape County Oil for 22 years, said 90 per cent of his business depended upon travelers. "About the only transit business I get now is people that are very low on gas," he said.

"I'll just have to see whether my business comes back," he added. "I've thought about opening a sporting goods store. I can't make a living from the amount of local business," he pointed out. Mr. Jenkins said he has 22 employes, some of whom will be released from work.

Appleton, Uniontown and Longtown are three more communities that have been abandoned by travelers.

Lange Motor Co., at Appleton, operated by Mr. and Mrs. Virgil Lange, is one of the few exceptions of businesses in the smaller communities that has not yet been affected.

"We are having more business from off the highway than we have had before," said Mrs. Lange. She believes the reason is that Appleton connects with the exit at Route KK, 3 1/2 miles to the west.

Floyd Lichtenegger and his son, James, operators of Floyd's Shell at Fruitland, are planning to open a new business at the Jackson-Fruitland exchange. "It's a good thing, too," points out the younger Lichtenegger, "if the past week is any sampling."

He said the station usually operated with three attendants on duty,"but one has been able to take care of it." He estimated the station pumped one-eighth the amount of gasoline over the Labor Day period as it did over the extended weekend a year ago.

Mr. Birk said it was necessary for him to release five of his 14 workers. His plans are to open a service station and vending operation at the Route KK exit.

Mr. and Mrs. Milford Mayfield, who operate Doc's Place, a small gas pumping station, grocery, cafe and tavern three miles north of Fruitland, do not believe their business will be affected significantly, since many of their customers are from the local area.

Residents of Longtown, where many houses set only a short distance from the highway, are pleased to see the traffic leave.

Said Mrs. Paul Hill, "It's a lot quieter and not as dangerous. I don't have to worry as much about my children walking along the highway to school."

Mrs. Emma Mueller of Longtown noted, "There always was so much traffic you couldn't even get across the street. When my children came home to visit they always commented on the highway and thought it was the busiest they had ever traveled."

Businesses at Perryville, the largest of the communities along Highway 61, appear to be the least affected.

"Our transit gas business is off," noted Lawrence Brown, manager of Perryville 66 Service, "but we've been getting a lot of local business, particularly for work on cars."

Mrs. Paul Gibbar, who operates the Park-et Motel and Restaurant at Perryville, said she expected business to fall off until billboard signs are approved and installed along I-55.

Eddie Sauer, owner of Intersection Motel and Restaurant at Perryville, said he expected business to falloff at least 60 per cent, "but we haven't lost enough to talk about."

"Since the opening of I-55, Highway 61 has been very quiet," observed Rip Schnurbusch of Appleton. "We sympathize with the people that live close to I-55 and now will hear all the noise."