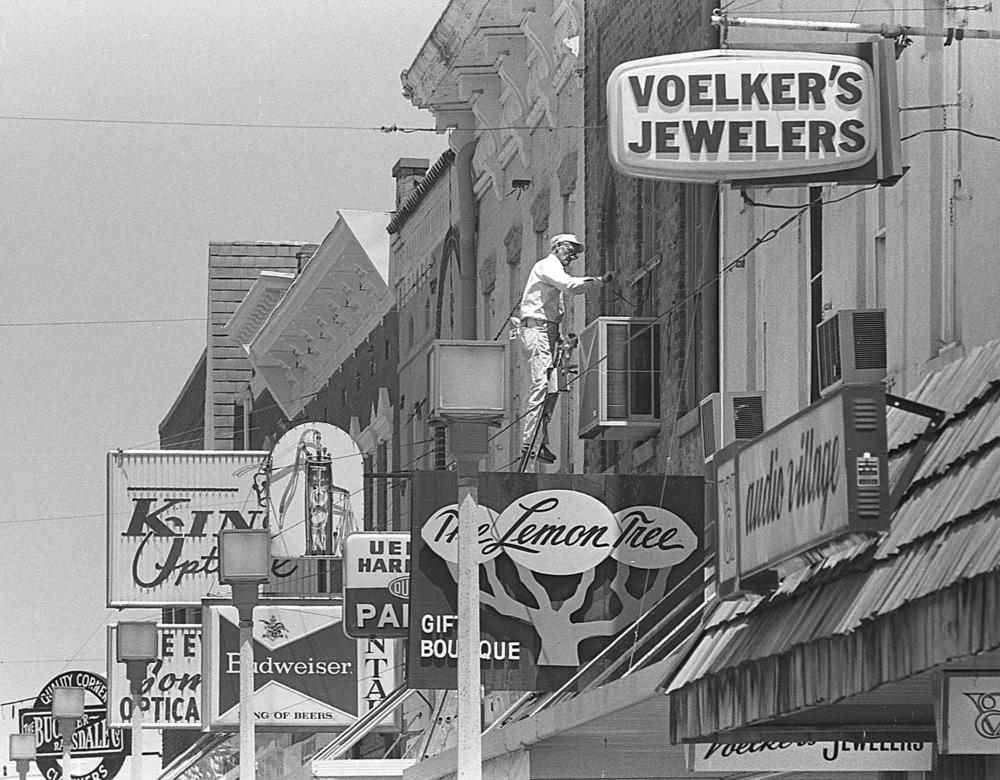 There is only one man in Cape Girardeau who can lay claim to having painted every building on Main street, and he is Fonnie Jones. Above, he works on a Main street building. 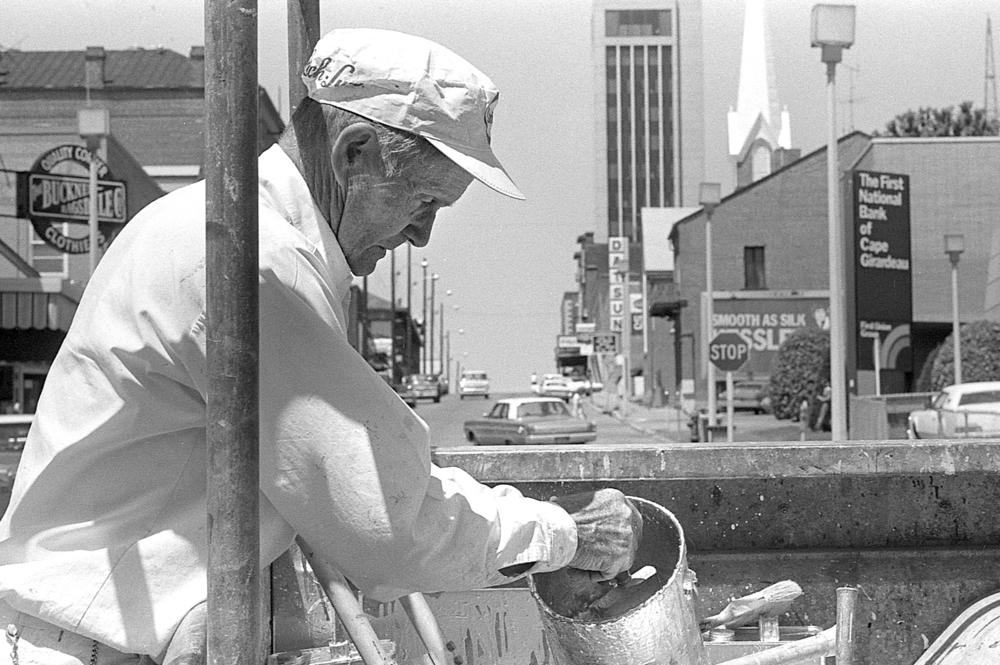 Above, Fonnie Jones works at Broadway and Main streets. Below, he enjoys the view of the Mississippi River while working on top of the floodwall. (Gordon L. McBride photos) 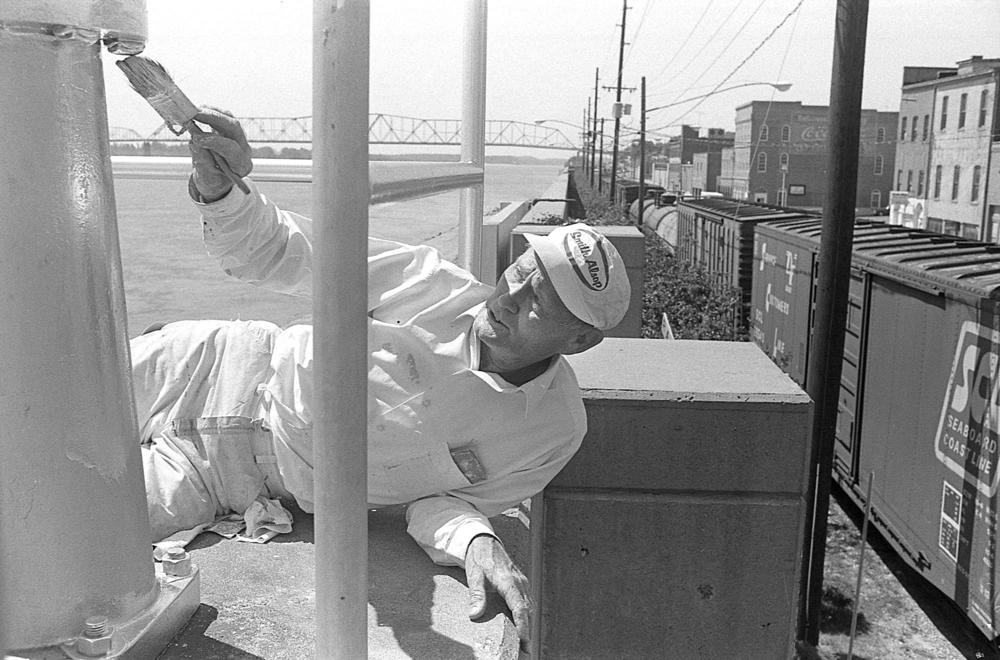 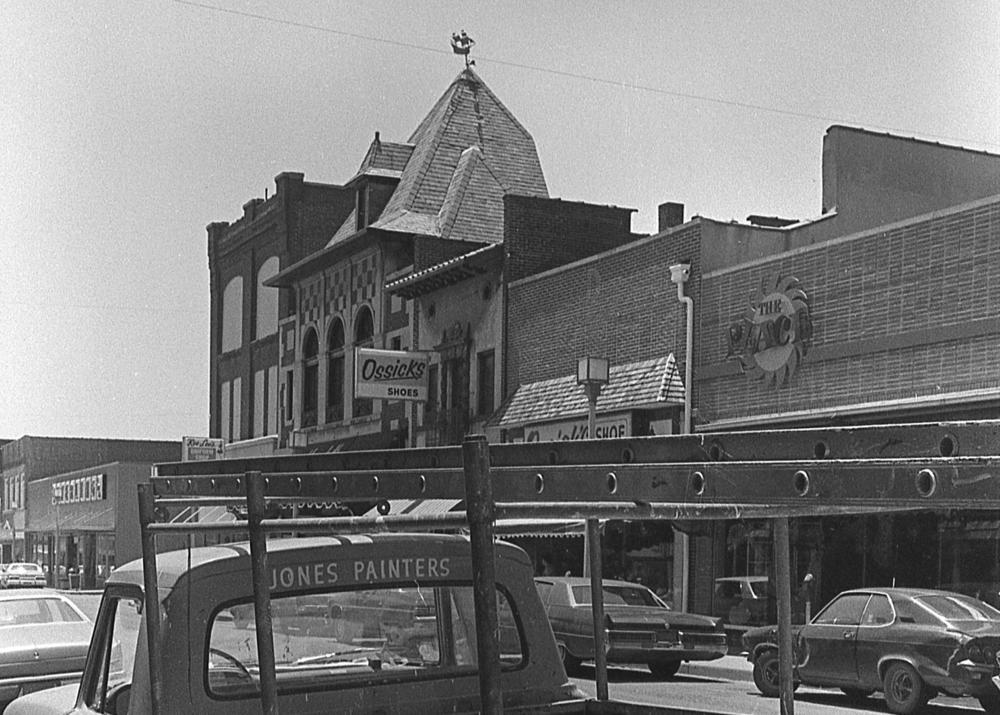 In the distance is the Mayflower weather vane which Fonnie Jones has painted a number of times atop Hecht's Store.

One of the best ways to find out what a town is really like is to ask the man who painted it. To get a real picture of Cape Girardeau, ask Fonnie Jones. He has painted a good number of the buildings in town.

Mr. Jones has lived here since 1922 when he moved from Thebes, Illinois at the age of 12. He began painting 38 years ago.

"I made 35 cents an hour on my first job," he remembers. "It was during the Depression and times were hard. I had to walk to work. Money was scarce, and I had to go without lunch. I worked eight hours a day and then had to walk home on an empty stomach."

Such a start did not discourage him. In just a few years he was supervising whole crews of painters.

"I had some interesting people working with me," he says, thumbing through a book of records. "Here's a man named Webster Grove. Wasn't even from Missouri. And I remember this one fellow from Arizona. He had to leave the state because he stuck a pair of scissors in his wife's neck. She didn't die, though. He said she was just too mean."

Mr. Jones has been in charge of as many as 30 men at a time. He supervised the work, kept records for each man, filled out progress reports and put in eight full hours of painting himself. "I never had a single man to get hurt in all these years," he says proudly.

The list of buildings Mr. Jones has worked on is endless. He has painted every building on Main street. In the 1950s he painted Academic Hall. He also repainted a girls' dormitory that stood where Dearmont Quadrangle stands today.

"One of the girls who lived in the dorm set it on fire somehow," he says. "I had to repaint 40 rooms and several large hallways."

Among his other projects have been the pumping station at Gravel Hill, the library at Southern Illinois University at Carbondale, the telephone company and the Marquette Hotel.

"We painted the Kaiser addition of the Marquette in 1956," he relates. "We had to work on it all through the winter, hanging on the windows like monkeys."

This was not the most dangerous job Mr. Jones ever undertook, however. He painted the 85-foot-tall cross that stands on Bald Knob in southern Illinois when it was first erected.

"While I was painting the cross a lightning storm came up," he says. "The wind was blowing, and the cross was shaking. There was no way I could get down. I had to get under one of the arms of the cross, stretch out my own arms and hang on for dear life." When it was all over, he finished the job and went home.

Another job that involved height was painting the Mayflower weather vane on top of Hecht's Store on Main street. Mr. Jones has painted both the store and the Mayflower a number of times. The most recent job was in 1975.

Martin Hecht, owner of the store, told Mr. Jones that the Mayflower was too high and too dangerous for him to paint, but Mr. Jones was determined to do the job. "If I did it once, I knew I could do it again," he says. He proved to be right. The job was completed without trouble.

Mr. Jones has only been hurt seriously once in all the 38 years he has been painting. The incident occurred while he was painting the Rialto Theater five years ago.

"A piece of structural glass fell right on top of me," he says, grimacing with remembered pain. "It felt like it had half-scalped me. Glass went into my wrist and cut an artery, and a sliver got in my leg. You can still see where the cut was," he says, pointing to a faint scar across his wrist.

A long-time customer of the veteran painter has been The Missourian. He has been painting The Missourian Building for 25 years and last year he painted the entire building himself.

Mr. Jones has also painted homes by the hundreds. "I used to keep two men who worked all year around just working on bathrooms and kitchens," he says. But this has changed in recent years. Today he does little inside house painting. "More and more people are doing that kind of work themselves," he comments.

His ability as a painter has led to many job offers with big companies, including Woolworth and Sinclair that wanted him to paint their chains throughout the country. Mr. Jones refused all these offers, although he was proud to receive them.

"Taking such jobs would have meant being away from my family a great deal," he explains. "My family is the most important thing in my life, and I couldn't leave them for a mere job."

Mr. Jones' family consists of his wife, Tena; his son, Charles Keith, and his daughter, Kay. Both children are married and live in other states.

Although Mr. Jones seems as lively as many men of 40, he has decided to retire at the end of this year. "I'll enjoy being able to spend more time with my wife," he says. "I've had a lot of adventures and a lot of fun, but now it's time to settle back and enjoy my memories. And I'm sure my wife will find enough things around the house to keep me busy," he says with a grin.

As a gift to the community in which he has lived and worked so long, Mr. Jones has painted several churches in the area. One of the churches was St. Vincent's Catholic Church where his daughter was married. "I have had a good life in this town and have always been able to find plenty of work here, and now I just want to say 'thank you,'" he explains.

The people of Cape Girardeau could say the same to Mr. Jones. He has spent more than half a century making this community a nicer, more attractive place in which to live. And that's something to be proud of.