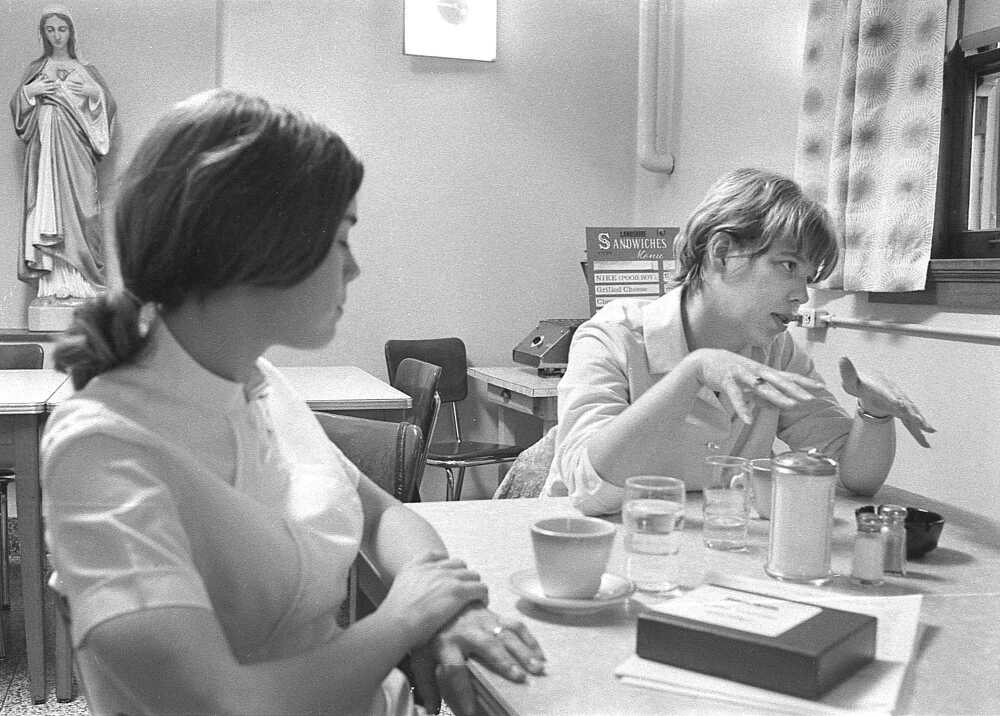 Giving a diabetic the daily insulin injections he must have to survive.

Clearing a restaurant found to be infested with rodents.

Tracing sexual contacts of a person found to have venereal disease in an effort to ward off what could mushroom into an epidemic situation.

These are some of the things a county health unit does. And that's why two registered nurses at St. Francis Hospital, Mrs. W.A. (Charlotte) Craig and Mrs. Robert Wallis, have given hundreds of hours as volunteer coordinators for the proposed public health unit which comes before Cape County voters Tuesday.

The issue, which has twice met defeat, will once again call for tax of a mill on every dollar, or 10 cents per $100 assessed valuation. The issue must pass with a two-thirds majority. Mrs. Craig emphasized that the tax is a fluctuating one, and it would likely go down after a year of operation. To the average taxpayer, the yearly tax would range from $1 to $5 dollars.

Mrs. Craig, who came here in January from Chattanooga, Tennessee, where she worked with the health department, said she knew of the necessity of a public health department to a progressive county, and was therefore interested in working to secure one for Cape County. Mrs. Wallis, a 1972 graduate of the University of Missouri-Columbia, School of Nursing, had part-time experience with public health nursing.

Under the guidance of Dr. Jean A. Chapman, Cape County public health officer, the nurses have secured volunteer pool workers and have made numerous talks before interested groups on the proposed unit. The League of Women Voters here conducted a massive door-to-door informational campaign on the issue, with Mrs. Craig and Mrs. Wallis instructing them during a series of workshops so they could be as well-armed with information as possible.

That a health unit "means welfare or black only and that only the poor benefit" has been the main misconception campaign workers have faced, Mrs. Wallis said. "This has been a stigma since World War I when county health units were set up to mainly help the poor. But this is no longer so. A public health unit today means meeting the health needs of a population at less cost."

In many cases, Mrs. Craig added, the services of a public health nurse can save time and cost of a physician's visit. She cited one example of an elderly Tennessee woman suffering from diabetes who was going blind from the disease. Although she was capable of giving herself insulin injections, she needed someone to draw the insulin, and was paying a neighbor 50 cents a day, or $15 a month on her scanty budget, to do this until the health nurse took over.

The energetic young nurses also agreed that various screening programs a health department might offer could detect serious disease--diabetes, heart disease or cancer--at early stages when cure or control is most likely.

Shortening hospital stays is also a likely offshoot of health department services, Mrs. Craig said. "A lot of patients just need the time to face up to things and get the courage to do it," she explained, "like daily injections, knowing how to change a colostomy and the like. A health nurse is available to instruct patients about these things and help them adjust."

However, the women stressed it is important for people to remember a health department is more than nursing or medical services. Sanitation, they pointed out, is a vital part of maintaining the health of an entire community.

A startling example of the need for a sanitarian staff large enough to make continual inspections of restaurants was shown in these things found over a short period of time here: A restaurant dishwasher using only cold water and therefore not sterilizing dinnerware; potatoes, onions and carrots found stored in two inches of water in a basement; a malfunctioning water system that was allowing toilet water to circulate through a beverage cooler, and a chef found to be working with active tuberculosis.

Mrs. Wallis said one of the first orders of business, should the unit be approved by voters, will be to determine where the needs are. "We realize it's impossible for two nurses (the number proposed for the beginning health staff) to do everything a health unit can do," said Mrs Craig. "But we've got to get to first base and go from there.

"If a person never has the occasion to use the health department, the fact that he has helped make it available to the rest of the county and the fact that we find one case of active tuberculosis or discover a rat control situation, it's insuring his safety, his children's safety and the community's safety."

"People don't project themselves into meeting anything which might require the help of a health unit," Mrs. Wallis added. "They just can't foresee a problem. But it might happen."

The Dec. 5, 1973 Southeast Missourian reported the health unit went down in defeat for the third time. The balloting was 2,328 for the unit and 1,781 against it. The unit received a 57 percent majority, higher than either of the two previous elections, but it was not enough for the two-thirds majority, or 66 percent, required by state law.

A light voter turnout was blamed for the defeat and this was attributed to wet, chilly weather. The 4,109 votes cast represented 14 percent of the approximately 30,000 registered voters in the county.

More than 9,000 votes were cast in favor of the unit in the second election in November 1972.

In a Feb. 16, 1986 Southeast Missourian story, a petition drive coordinated by the League of Women Voters to put the mill-tax measure on the ballot to support the Cape County Nursing Service was discussed by Mrs. Charlotte Craig, administrative nurse with the service.

Under new Missouri legislation, passage of a mill tax would require a simple majority. It previously required a two-thirds majority.

The mill tax was needed, Mrs. Craig explained, for a number of reasons, including current funding processes, changes in Medicare payments and a growing demand for additional services.

At the time, Cape Girardeau was one of 32 out of a total of 114 counties statewide that did not have mill-tax supported departments.

The decision to pursue a mill tax, Craig said, was made "because we believe the time is right, and the need is certainly there."

She emphasized that the mill tax was vitally needed," not just to expand, but to maintain what we have worked so long to attain."

Cape Girardeau County voters approved the mill tax to establish the county health unit August 5, 1986. The Aug. 6, 1986 Southeast Missourian reported that the 10-cent per $100 assessed valuation tax passed with 59.49 percent for and 40.51 percent against. The vote total was 5,399 for the measure and 3,677 against it.

"It was true excitement to see the issue pass," said Charlotte Craig, administrative nurse with the Cape County Nursing Service. "We're pleased, and most grateful, that Cape County stood behind what is a very real need--a county health department. Cape County has done something for itself--something it has deserved a long time."

The issue carried most wards with a comfortable margin. The tax was expected to realize about $360,000 annually for operation of the health department.

Craig said no major changes were anticipated in programs, but it would likely expand present programs and offer new ones.

"Everything has been operated at the nursing service as a health department would be," Craig said. The service would remain at its present location at the old Cape Girardeau public library building in Courthouse Park.

The Cape Girardeau County Public Health Center opened its doors Dec. 27, 1989 at 1121 Linden St. in Cape Girardeau. The move from the Common Pleas Courthouse Annex increased its space from about 1,600 square feet to 7,000 square feet on a site that would allow expansion.