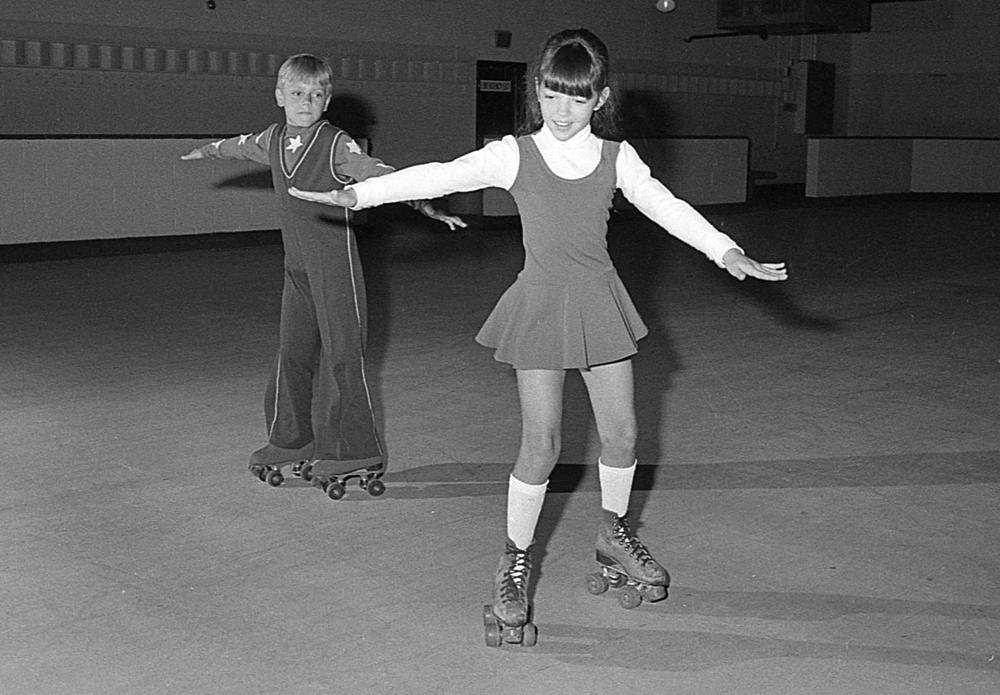 Skating is just a matter of practice as Scott Wilson and Beth Beasley will be sure to tell you. Above, the young skaters (Beth is the youngest member of the Kingsway Skate Club) practice on their spins before an exhibition. Below, Laura McNeely, left, and Lisa Sutherland perform their duet free-style skating routine. (Fred Lynch photos) 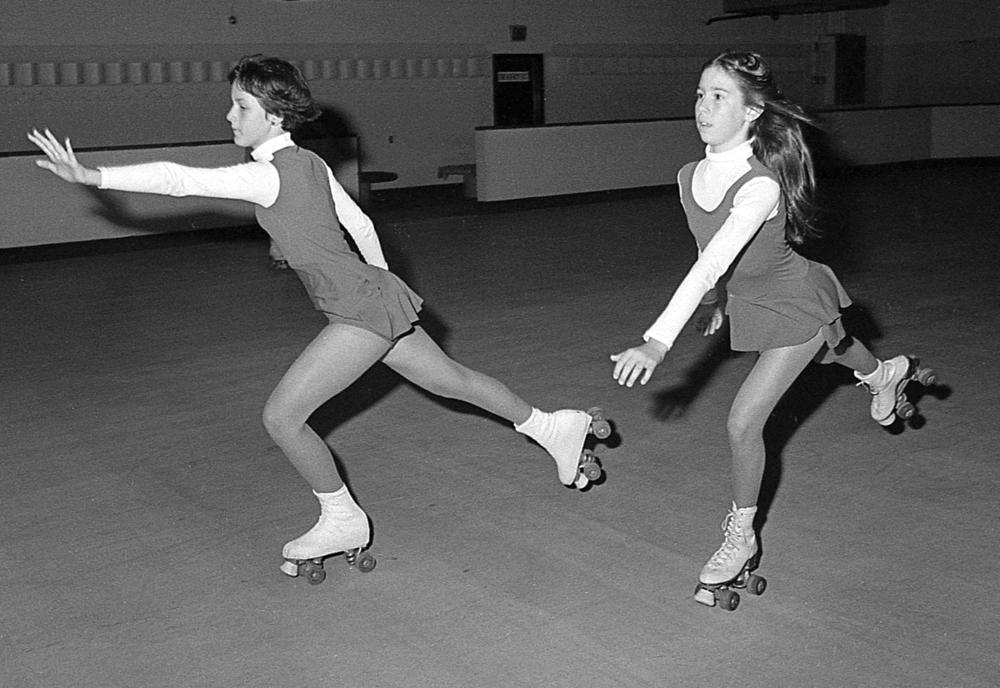 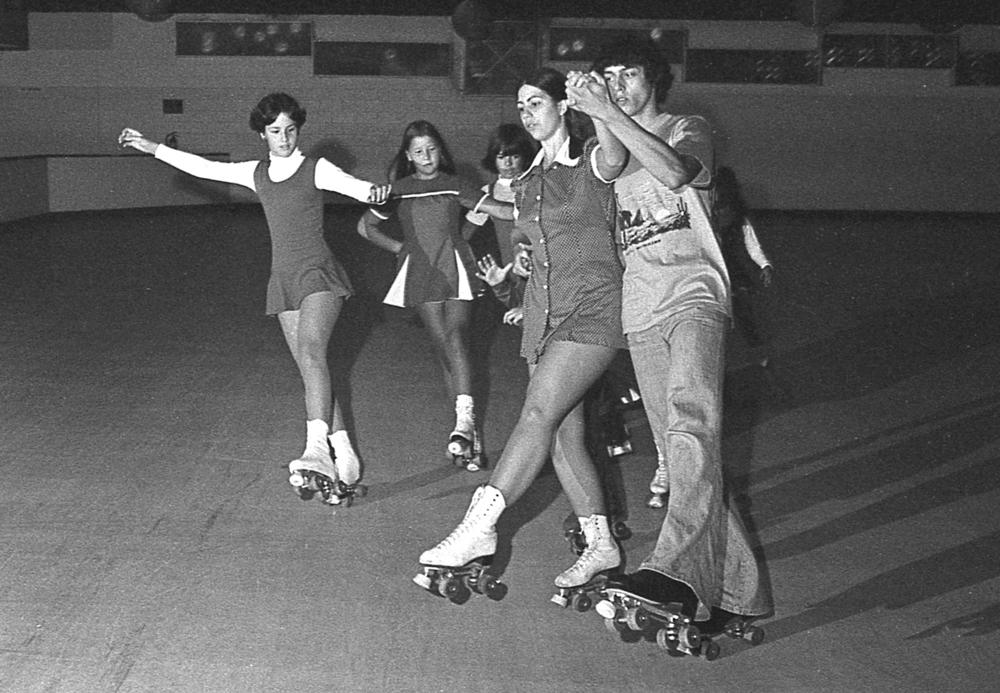 Above, skating coach Mrs. Sheri Dillow and Terry White lead the other skaters through some basic stunts. Below, Melanie Wolford and Steve Hornbeak practice one of the movements of their routine. 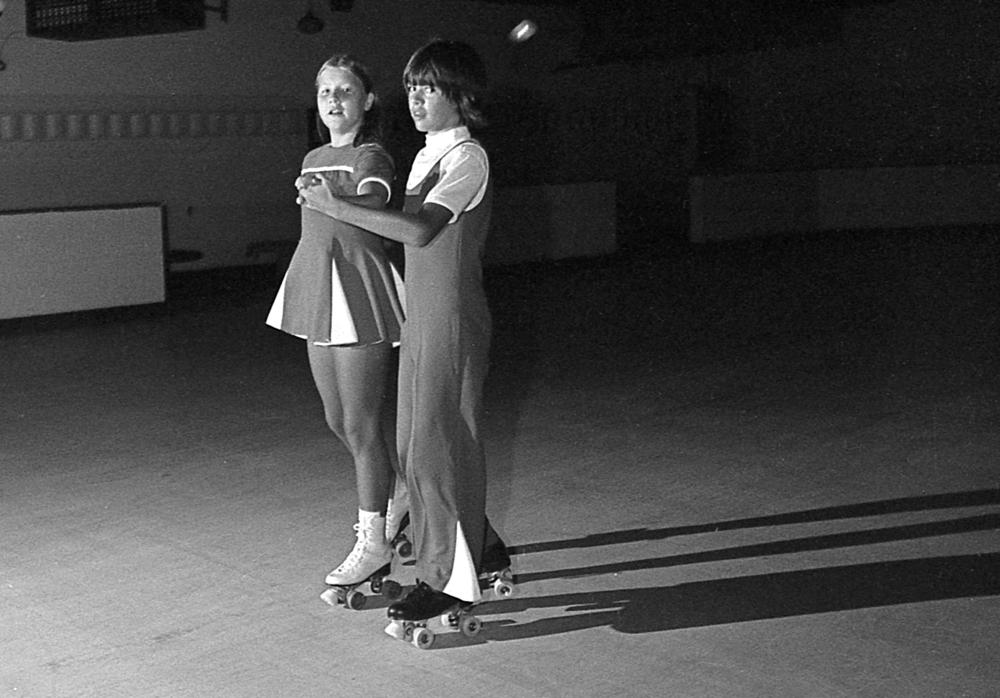 Not quite professionals yet, members of the Kingsway Skate Club are diligent amateurs who have discovered a whole new realm of skating--competition.

The Kingsway Skate Cub is operated and coached by Mrs. Sheri Dillow who not only is the pro and coach for Kingsway Skateland, but she is also an employe of a St. Louis skate rink and is a teacher at Jackson.

Mrs. Dillow stressed, "We are not just a club, but a team. There are about 25 members."

The skate club made an exhibition appearance Friday night at the annual Jerry Lewis Skate-athon for Muscular Dystrophy held at Kingsway Skateland. Members of the club did dance, duet and solo free-style skating.

Ranging in age from 9 to 17, the members vary in ability. Mrs. Dillow added that membership is always open to anyone, no matter how young or old.

The club began one year ago as a skating class. It has come a long way since then, however. This October the club expects to receive its charter from the U.S. Federation of Amateur Skaters. The federation has clubs throughout the country, but the Kingsway Skate Club is the only organization of its kind between St. Louis and Poplar Bluff.

Most skaters begin when they are in third or fourth grade, but as one member, Terry White, pointed out, many youngsters do not learn to skate until they are in junior high school.

All of the practice will prove worthwhile to the skaters at the end of this month when they will take official tests. There is competition in dance, figure and free-style skating. The event is sponsored by the Roller Skating Rink Operators of America and will be held in St. Louis. Medals will be awarded to winners.

The skate club also plans to compete with other teams from the St. Louis area, Poplar Bluff and Illinois during the competitive season, which runs from October until May.

Laura McNeely stated, "The hardest parts of skating are the jumps and falling down."

Mrs. Dillow feels that a lot of the members will lose their fear of falling and other apprehensions after several performances such as the exhibition Friday night.

Many of the skaters agree that the butterflies don't start fluttering in their stomachs until they skate in front of someone who knows about skating and the techniques.

Skating is important to these youths and as Lisa Sutherland remarked, "For the time being skating comes first, before everything else."

Mostly junior high age, the enthusiastic skaters can look forward to more practice and learning. There may be a time when one of them will travel to regional and national competition and maybe even world contests. It's a goal that some of the members have set for themselves, but a lot of practice and perfection will have to be mastered to compete with winners of these contests.

Mrs. Dillow added that ice skating is much different than roller skating. The same stunts are harder on roller skates because roller skates are heavier and more difficult to control than ice skates.

Lisa Sutherland pointed out, "You have to keep your concentration, to remember what you are supposed to do next."

The skate club members participating in the exhibition Friday night entertained the entrants with fine skating. Scott Wilson performed to "God Bless America" and was completely patriotic by wearing a red, white and blue skate suit with stars on it. Scott noted that he chose this song for a specific reason. "God Bless America" is real slow, and I had time to figure out what I was supposed to do next."

Skating has come a long way in the past few years. While many of the club members recall learning to roller skate in their basements and on sidewalks, now they only skate at a rink. Also, the skates that most people have learned to skate on, the skates that clamped on to your shoe, are almost nonexistent today.

The team members have boot skates complete with covers to protect their boots and know far more than the average skater. With thoughts of jumps, spins and trying not to fall down in the middle of a trick, the skaters are far above the average skater who worries about making it around the rink without falling.

Skating has progressed nationally but is just now beginning to catch up in our area. The new Kingsway Skateland replaced an older roller rink which was located in the country and doubled as a gymnasium.

With thoughts and dreams of the future, as any youth does that is involved in a sport, the skaters are now on their way with keen competition beginning in October.