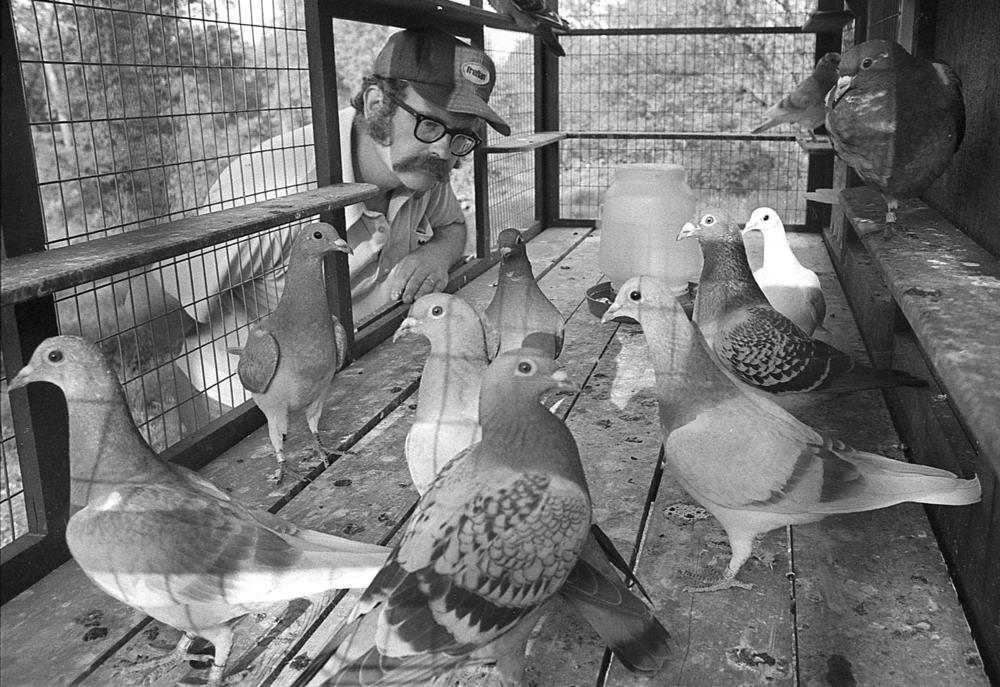 Bill Headrick checks racing homing pigeons Friday, April 23, 1976, as he starts final preparations for the race on Sunday. The pigeons were sent to Newport, Arkansas, early Sunday morning for the 150-mile flight back to Cape Girardeau. Below, Kris Headrick, 11-year-old daughter of Mr. and Mrs. Bill Headrick, displays one of her racing homing pigeons (Fred Lynch photos) 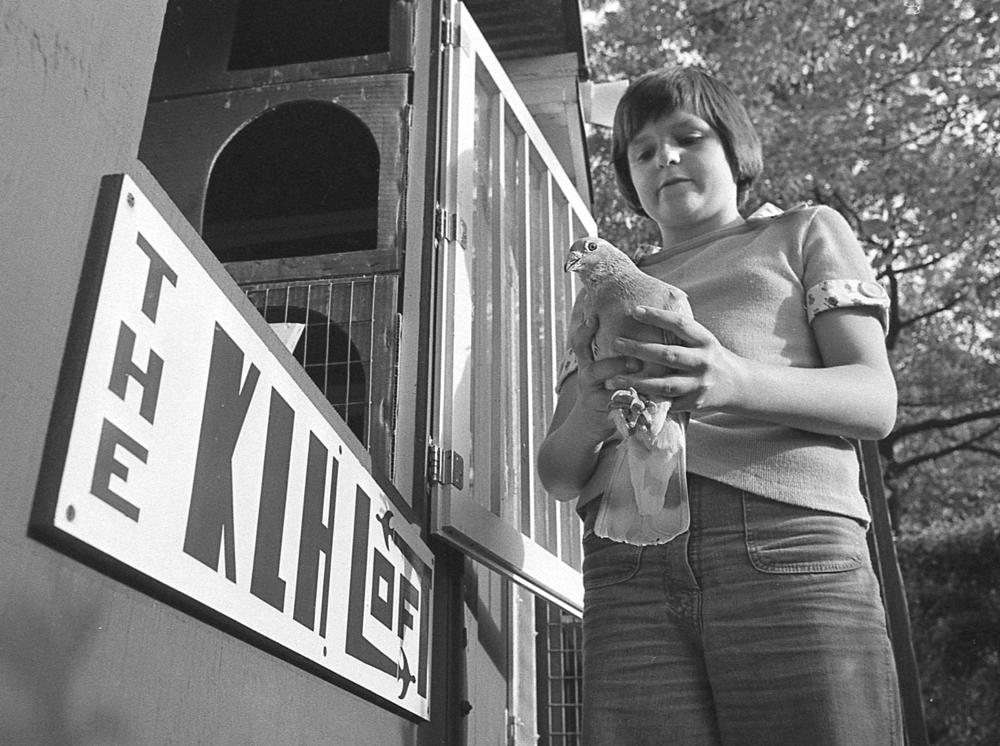 [The red-bar hen checked in at 9:30 a.m. Shortly after, the red-and-white grizzle flyer hit the loft. Several minutes passed before the blue-check reported in. By 10:30 a.m., a total of 61 racing-homing pigeons had made the long haul from Pocahontas, Arkansas to various points around the Cape Girardeau-Jackson area, ranging in speeds from 40 to 63 miles per hour.]

Pigeon racing is not your every day sport. You won't find throngs of people pushing and shoving to find good points to view the races, and you won't find that many enthusiasts of the sport.

But, to those half-million or so devotees to this rare diversion, a real sports salute is deserved. Unlike owners of racing dogs and horses, they are in it for pure, unadulterated sport.

There are no prize monies, in most cases no trophies, and almost no publicity.

"But, the sport is growing," says Bill Headrick, one of nine active members of the SEMO Racing Pigeon Club, ranging from Jackson, Cape Girardeau to Sikeston. "Nationally, more and more racing clubs are being formed. Of course, you may get some raised eyebrows when you talk about it."

The concept of pigeon racing is not what many persons may have in mind.

"A lot of people think you line the pigeons up at some sort of starting line, and let them go," said Headrick. "But, we're not talking about distances of a couple hundred yards. More like a couple hundred miles."

In fact, the 200 miles would be a short haul for the racing homers, who often race in competition upwards to 750, even 1,000 miles.

"The longest run we have in the SEMO Club is about 750 miles," said Headrick. "We race in the spring and the fall of the year, and range our races from the 100-mile run from Pocahontas, upwards to 750, from San Antonio, Texas."

How do the pigeons reach their starting points?

"In the earlier races of the season, we'll drive the birds to Pocahontas and Newport, Arkansas," said Headrick. "But, when we get to the 200-mile-plus flights, we send them Air Express to Little Rock, Texarkana, Dallas, Waco and San Antonio."

And if you'll plot the return course of the homers, it's always on a northwest pattern.

"That's the way we train the birds," added Headrick. "Some clubs train for a straight north pattern, others south, or southwest, depending on where a club is located."

The homing pigeon has an undying desire and determination to return to its own loft as quickly as possible, and with its mysterious ability to navigate uncharted skies few are lost.

But, they must have delicate care in breeding, training and racing.

Members of the SEMO Club--Ray and Joe Reiminger, a father and son team of Jackson; Jack Tidwell of Jackson; B.F. Carr of Cape Girardeau; Al Lunsford of Cape; Bill and Kris Headrick, a father-daughter team of Cape, and Jim and Scott Sindle, a father-son team from Sikeston--have their own means of training.

"We usually start training our birds when they're about two or three months old," said Headrick. "Kris, (Mr. Headrick's 13-year-old daughter) and I will take them to Dutchtown and release them. Next time out, we'll take them to Delta, then Advance, and Duck Creek. Then we feel they're ready for that first 100-mile race from Pocahontas."

Kris likes to tell the story of one of her birds, which was lost for a few months.

"This bird was only a month and a half old when we released it at Duck Creek with some older pigeons," she said. "He, or rather she, in this case, didn't return to the loft, and we assumed she was lost somewhere."

"Then, one day, a strange pigeon came into our loft," said Kris. "After checking the leg band, it was found to be our little pigeon lost."

All racing homers are tagged with an American Racing Pigeon Union band. National headquarters for the ARPU is in Chicago, Illinois. The SEMO Club is an affiliate of the national organization, which has approximately 40,000 to 50,000 clubs across the country.

There is no championship race, but each year race fanciers from a dozen Midwest states conduct what is called the "Show-me Combine" race, with entries from Colorado, Nebraska, Kansas, Missouri, Illinois, Indiana, among others.

"There were about 1,000 entries in the race last year." said Headrick, "and the SEMO Club took top honors with the first four places.

The pigeons average from 40 to 60 miles per hour, depending on tailwinds, or headwinds. In the SEMO Club's first race last weekend, the winning homer averaged 63 miles per hour from Pocahontas, Arkansas.

"The birds were released at 7:45, and had wind gusting up to 35 mph," said Headrick. "So, this was a fast time. You can figure the 40 mph average, which will go the plus or minus side, depending on the wind factor."

Kris Headrick had the numbers one and two entries in the race.

"The mileage will differ a bit, depending on the location of the loft in southeast Missouri," said Headrick. "The distance to our loft was 105.245 miles, while for the Sindles at Sikeston, the distance was 87.183 miles. But, flights are figures on yards per minute, so the total distance doesn't matter."

Miss Headrick's winning homer came in with an average of 1,845.111 yards per minute, which figured to 63 miles per hour. The top six birds--out of the 61 which raced--finished at 60 mph, or over.

"We limit each club member's entries to 10," said Headrick. "They can send as many birds as they want to, but have to designate which 10 will count in the weekly race."

The SEMO Club's race today will cover about 150 miles, on a flight from Newport, Arkansas. And, next week, the distance goes to 235 miles, as birds will be shipped to Little Rock.

When the birds go by express, racing clubs in the respective towns release the homers at a specified time.

The homers, like dogs and horses, do have pedigrees and all are registered with the ARPU.

Many states--including Missouri--have state laws to protect the homing pigeon. The birds were used extensively during World War I, and on a more conservative basis during World War II, for battlefield communications.

Pigeon racing actually dates back sometime before the Middle Ages, and it's still the national pastime in Belgium. Although not the fastest bird in the world, the ARPU has on record one from Detroit, Michigan, which exceeded 70 miles per hour in a 200-mile flight.

And, for distance, the homers have no equal in the bird world. Back in 1931, a homer released in France reached its home loft in Indochina--7,200 miles away--in 25 days. Since the birds fly only in daylight, and without figuring stops for food and rest, that was a 25 mph average.

Costs of the hobby?

A pair of birds range from $25 up. Last year, a pair of "proven breeders" sold for $25,000 on the East Coast. The lofts range from a couple hundred dollars up, and the time clocks, which is a must, range from $100 up.

"Some fanciers use an aluminum storage shed for the loft," said Mr. Headrick. But others go with the fancy lofts. I've seen pictures of lofts which are unbelievable, two and three stories high."

Homing pigeon racing is a sport in the truest sense of the word.