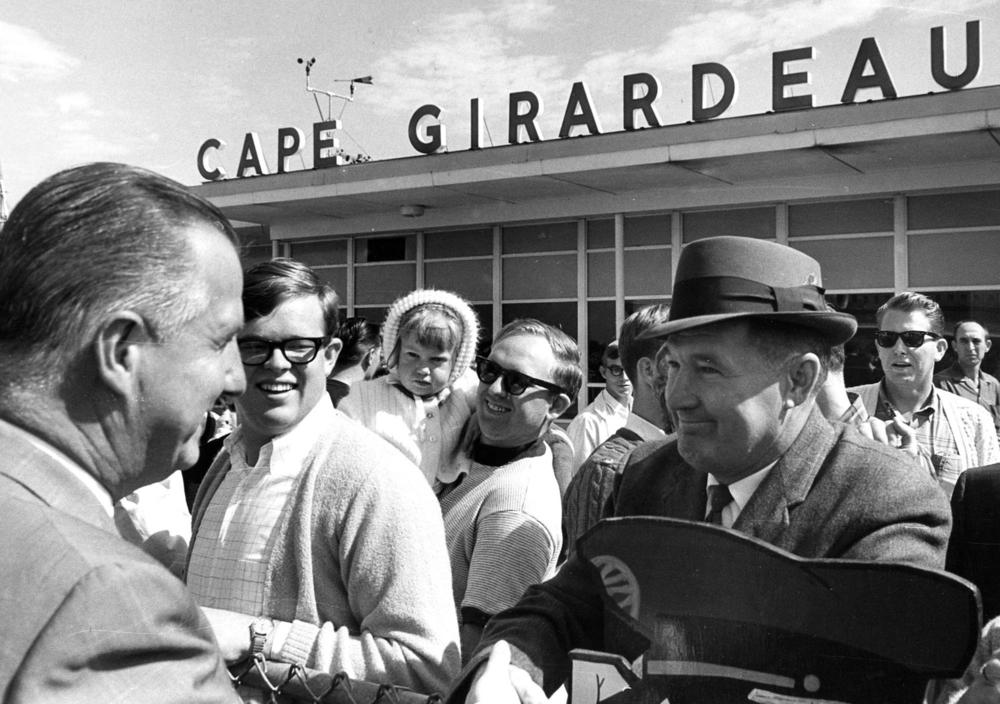 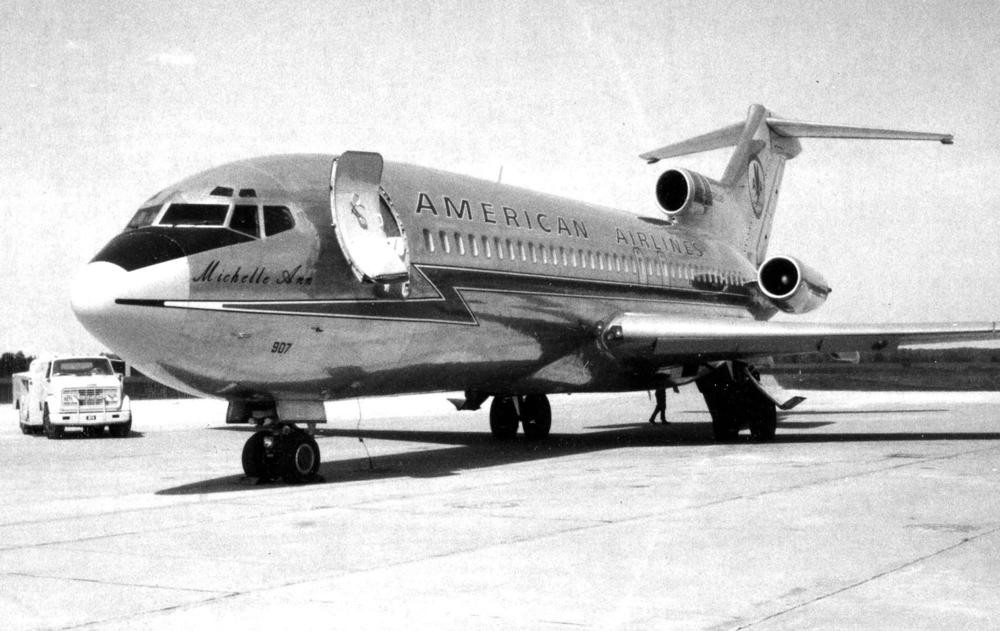 The Boeing 727 jet airplane which carried the Republican nominee for vice president in to Cape Girardeau today is one of the largest ever landed at the Cape airport. 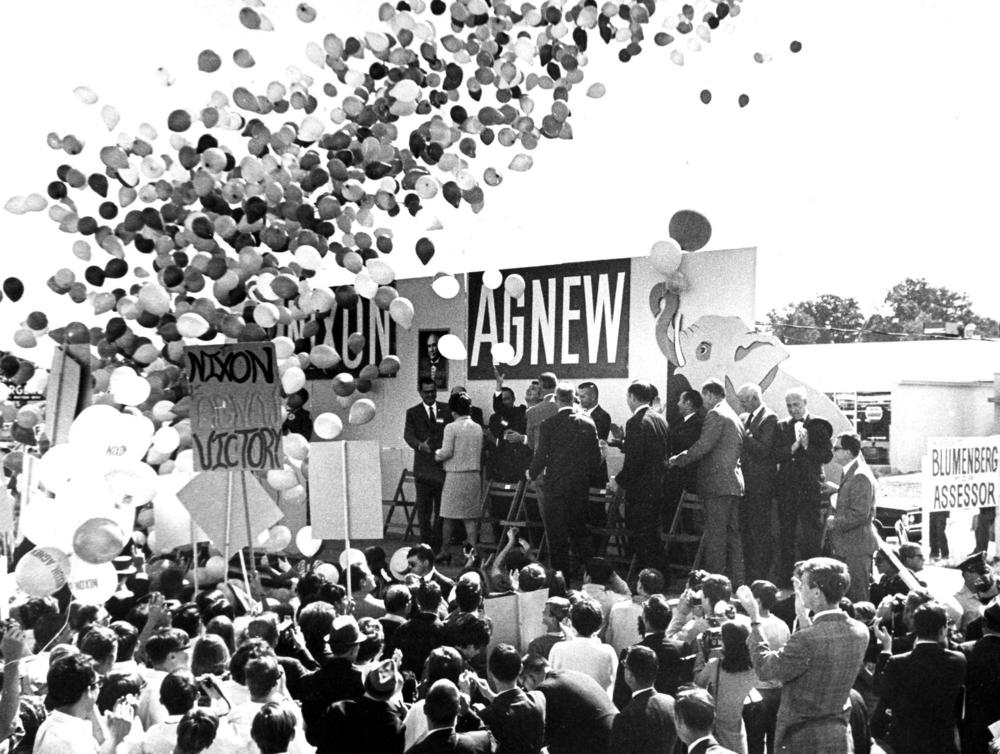 Thursday was a big day for Cape Girardeau Republicans. The party's vice presidential nominee, Maryland Gov. Spiro T. Agnew, was in town to speak at a rally at the Town Plaza Shopping Center. At the speakers platform, 1,000 balloons of different colors rise as the Agnew party arrives. At left on the platform, Vernon H. Landgraf, Republican candidate for Congress, greets Mrs. Agnew. Gov. Agnew is in the light suit behind her. (Bill Straeter, The Associated Press) 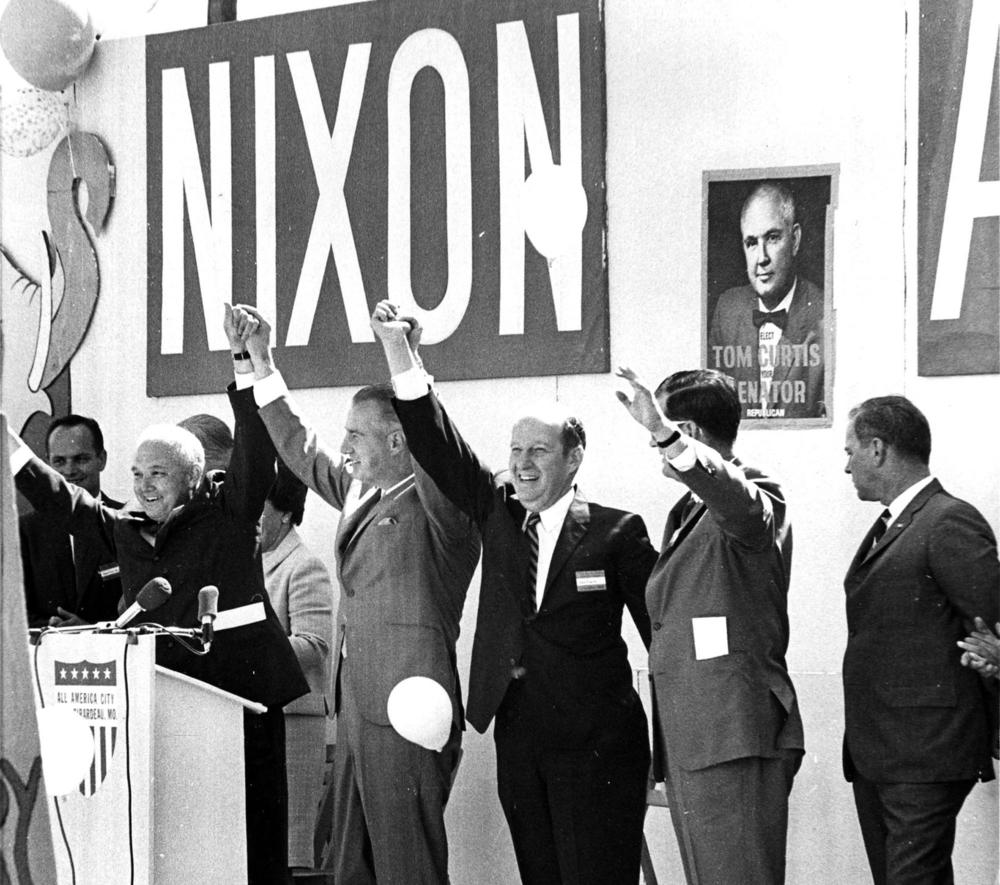 Speaks out for young people

A crowd estimated to be 3,000 [later crowd estimates made by police were 4,500], many of them carrying posters, gathered on the parking lot of the shopping center to hear the Republican vice presidential candidate.

Gov. Agnew arrived here by jet airplane shortly before noon and came to the shopping center by car from the airport.

Off to the West Coast

After his address--he spoke for about 20 minutes--the candidate returned to the airport for a flight to Portland, Oregon.

"I didn't come here to whip you into a frenzy," Gov. Agnew told the crowd. "I understand that was attempted here not too long ago," an obvious reference to Mr. Wallace's recent visit here.

Turning to Vice President Humphrey, Gov. Agnew remarked, "The vice president is saying a great many things these days. He's on all sides of every issue."

Gov. Agnew declared that the Democratic presidential nominee is frightened over his showing in the public opinion polls.

"It's been said that the Republican party is not as exciting as the party that has been in power the past few years," Richard M. Nixon's running mate commented.

"But if being exciting means having a Naval vessel snatched from the high seas; if it means setting a torch to a city or if it means the disruption of the national convention of one of our two great political parties, I would rather we were as dull as in the days when those things didn't happen."

Gov. Agnew drew a large cheer from the crowd, which included many young people, when he stated, "One conclusion I've reached in traveling about the country is that we've got the finest crop of young people this country has ever had."

He charged them to bring about change in an orderly way.

"You will offer us great change. But we want to see the change occur in the traditional way, through the ballot box...not with a box of matches."

Gov. Agnew, speaking on the law and order issue, stressed that the term means more than civil tranquility.

"It also means we must continue to move toward justice and compassion for all our citizens."

Gov. Agnew charged the administration with using "your tax money and my tax money in unconstructive ways" and took a shot at the Office of Economic Opportunity, claiming it "simply hands out money to silence the most militant elements of the ghetto."

Returning to the third-party movement represented by former Alabama Gov. Wallace, Gov. Agnew presented Mr. Nixon as the only realistic candidate offering an alternative to the present administration.

He said Mr. Wallace, because there are no third-party members of Congress, could not govern effectively even if he won the presidency.

Gov. Agnew, dressed neatly in a gray suit, his steel gray hair combed straight back, was greeted by a colorful barrage of balloons as he rose to speak.

Accompanying him to the platform were his wife and three daughters. Before taking the platform, Gov. Agnew paused and greeted some of his supporters.

Gov. Agnew was introduced by Vernon H. Landgraf, Republican candidate for Congress from the 10th District.

Also on the platform were Lawrence Roos, candidate for governor, and Rep. Thomas B. Curtis, candidate for the U.S. Senate. They made brief remarks to the gathering before Gov. Agnew's arrival.

Master of ceremonies was M. Luther Hahs. The Central High School band presented the music for the occasion.