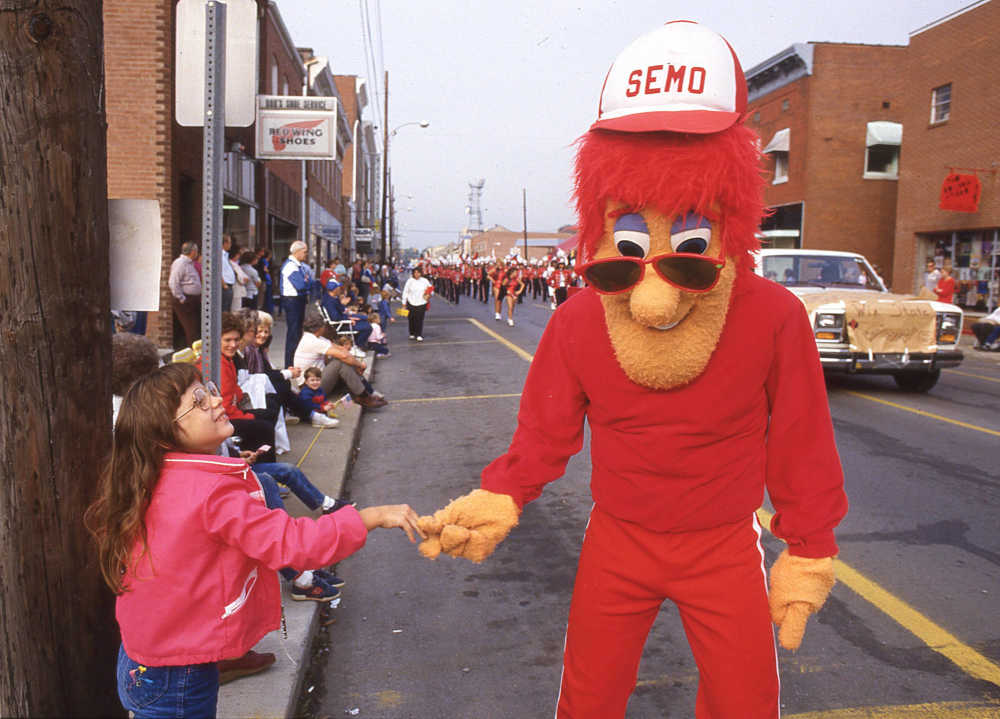 SEMO Red made his debut a year earlier:

SEMO in search of yet another mascot

After abandoning its traditional Indian chief and princess mascots 10 years ago, the school experimented with two other mascots. Both proved unpopular and were quickly dropped.

It hasn't had a mascot for the past several years.

Spurred on by the request of students who want to improve school spirit, university president Dr. Dale Nitzschke has appointed a committee to recommend a new mascot.

The committee will report to Nitzschke by the end of the spring semester. A new mascot could be in place by fall.

Jim Biundo, who heads up university relations as assistant to the president, will co-chair the committee. Biundo said the committee of some 20 people will include students, student athletes, cheerleaders, faculty, staff, the school's athletics director, and alumni and booster club representatives.

The committee will hold its first meeting next week.

While the major focus will be on choosing a mascot, Biundo said the committee also will look at the whole issue of the school's Indian symbol.

The sensitivity-to-Indian-culture issue has become a growing topic of debate at colleges nationwide. Indian names are widely used to symbolize athletic teams.

"We do want to have an open discussion about the symbol and the mascot," Biundo said.

He said the committee might consider how the school could educate its students about the area's Indian culture and heritage.

Nitzschke said the university has used "Indian" in good taste. But he said the committee was free to consider all issues related to the symbolic representation of the university.

Nitzschke said no one has suggested eliminating the use of Indians.

Nitzschke said he would take any recommendation for a new mascot to the Board of Regents.

"When you talk about school spirit, you need to involve everybody," he said.

The school's mascots traditionally were Chief Sagamore and Princess Otahki. They were fixtures at Southeast Missouri State University football and basketball games.

But in the mid-1980s, the university decided it was inappropriate to dress people up in Indian costumes.

In 1985, the school abandoned the Indian garb in favor of SEMO Red, which featured a student dressed in red and wearing a huge head.

But within a year, it was replaced by the Thunderbird.

Biundo said many people felt SEMO Red was a poor image for the school.

"It had almost a country bumpkin image about it," he said.

Biundo served on the committee that chose the Thunderbird. The committee selected it over the eagle.

The eagle is the mascot for another school in the Ohio Valley Conference, which Southeast joined in its move to Division I.

Some members of the campus community felt it was wrong for Southeast to use an Indian religious symbol for its mascot.

Biundo said he and a majority of the committee favored the Thunderbird as a mascot and didn't feel it was offensive to Native Americans.

But the mascot never caught on. Biundo said the general public didn't identify with the bird.

Whatever new mascot is chosen, Biundo said he hopes it will be around for a while.

Short-term mascots don't create any solid identity for the school, he said.

But a mascot is more than just a costume. "Mascots can succeed or fail depending on the personality of the person inside," Biundo said.

Thunderbird made its debut Jan. 11, 1989 at the Southeast versus Rolla, Mo. basketball game.

Rowdy Redhawk is the present mascot for Southeast Missouri State University. He was introduced before the basketball game against Austin Peay at the Show Me Center on Jan. 22, 2005.