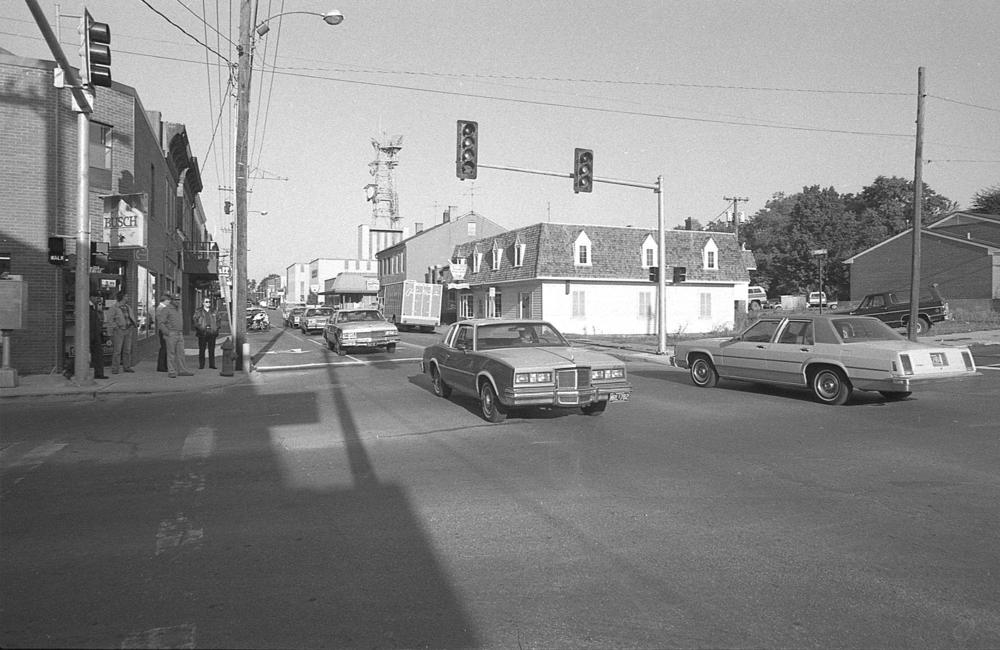 There was a bit of a traffic snarl between 7:30 and 8 a.m. this morning on Broadway. The left-turn traffic signal for westbound traffic on Broadway at Sprigg (pictured above) was hard to see because of the early morning sun shining on it, and a parked van obstructed the view for traffic northbound on Frederick street, but officials said they were pleased with the way the conversion of the street from one-way to two-way happened this morning. Below, a one-way sign is removed. (Fred Lynch photos) 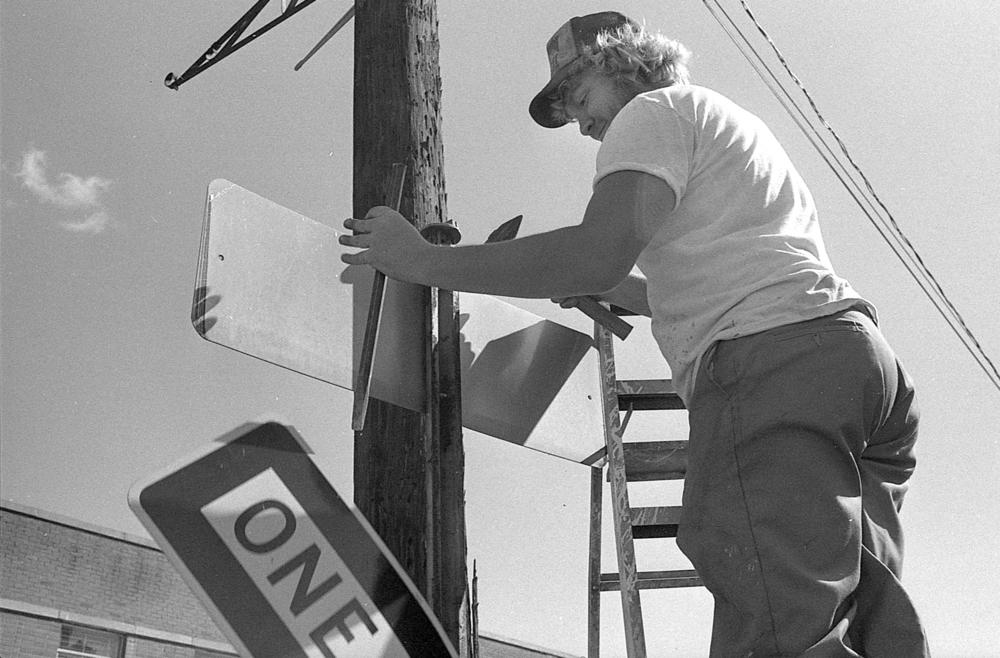 For long-time Cape Girardeau residents a drive downtown this morning must have seemed like a deja vu experience. For the first time since 1976, traffic flowed both ways on Broadway between Pacific and Lorimier.

The conversion of Broadway back to two-way traffic this morning, originally scheduled for May 1 and then August 1 but postponed because of delays in receiving equipment, proved to be relatively smooth with no accidents and only a couple of minor problems, said Cape Girardeau Police Chief Ray Johnson.

City Manager Gary Eide said that he was also pleased with the apparently uneventful and easy conversion of Broadway back to two-way traffic this morning. He noted that city engineers and workers labored throughout the night to get the traffic signals and signs ready and their efforts seemed to pay off.

The two minor problems identified by the heavy contingent of police officers and employees of the Eagle Signal Company, who were present this morning on Broadway, were the apparent obstructed view of oncoming Broadway traffic for northbound Frederick drivers due to a parked van and a weak left-turn signal light for people westbound on Broadway at Sprigg, said Johnson.

"And we're looking at the possibility of removing maybe three or four parking spaces at the Frederick and Broadway intersection east and west on Broadway to eliminate the site obstruction problem," said Johnson. He added that he had already told city engineers about the problem and understood they were to inform Eide at a meeting this morning.

"The difficulty with the left-turn signal appears to be that the morning sun reflects on it, making it difficult to distinguish," said Johnson. "We're talking with the people from Eagle in an effort to find a solution to that problem."

Johnson said two solutions may be possible for the weak signal. First, it might be strengthened and if that doesn't work, then a shield might be erected to block the sunlight from shining directly on the signal.

There was a back-up of traffic during rush hour this morning, noted Eide, which he attributed to the signals not being fully synchronized yet.

"It may take two or three weeks to get the signals synchronized so that we eliminate any kind of traffic back up in the early morning like that," said Eide.

Johnson said that he has instructed his officers to be lenient in writing tickets for traffic violations on Broadway over the next two weeks.

"We are allowing for a period of adoption by the public," said Johnson. "I've stressed the use of warning tickets by officers where appropriate. But, of course, flagrant violations like running a stop sign or traffic signal will not be tolerated."

The only exception to this lenient policy, noted Johnson, will be with double-parking violations.

"I've told my men that double-parking is to be prohibited under any and all circumstances," said Johnson. "We've made arrangements for loading zones and plenty of businesses downtown have loading areas in the back of their stores, so there shouldn't be any need for double-parking and it won't be allowed."

Merchants along Broadway feel basically one way about two-way Broadway. They like it. That's the conclusion of a recent study done by students in a SEMO State University marketing research class.

Ninety-five percent of the merchants surveyed said there was either no change or an increase in sales since the change to two-way. "This shows that changing Broadway has increased both automobile and consumer traffic," the report notes.

Fifty-three percent of the merchants said they had increases in consumer traffic and 69 percent said the automobile traffic had increased on Broadway. "This in turn is the reason for the reported increase in sales," the study points out.

Broadway, which had been one-way between Pacific and Lorimier since the summer of 1976, was changed back to two ways last Sept. 22 at a cost of about $35,000. A total of 56.4 percent of the merchants said they believe the changeover was worth the cost.

But 60 percent of the respondents indicated that parking has not improved along Broadway.

Of the 55 merchants surveyed, 28 or 50.9 percent said their sales had increased since the change. Two of the respondents said sales at their stores had declined, while 25 or 45.5 percent indicated sales had not changed.

In a related telephone survey of 269 consumers, conducted during the week of Nov. 7-10, 144 or 60.3 percent of the consumers said they thought two-way Broadway has improved the power of the downtown to attract businesses, according to Peter J. Gordon, SEMO State University marketing teacher.

Thirty-eight consumers or 15.9 percent said they believe two-way traffic hurts the downtown area. Fifty-two respondents said they thought the change has had no effect.

Gordon said that the two surveys show "there appears to be generally widespread support for the change of Broadway from one-way to two-way."

Read about the conversion to one-way traffic on Broadway in this previous blog: