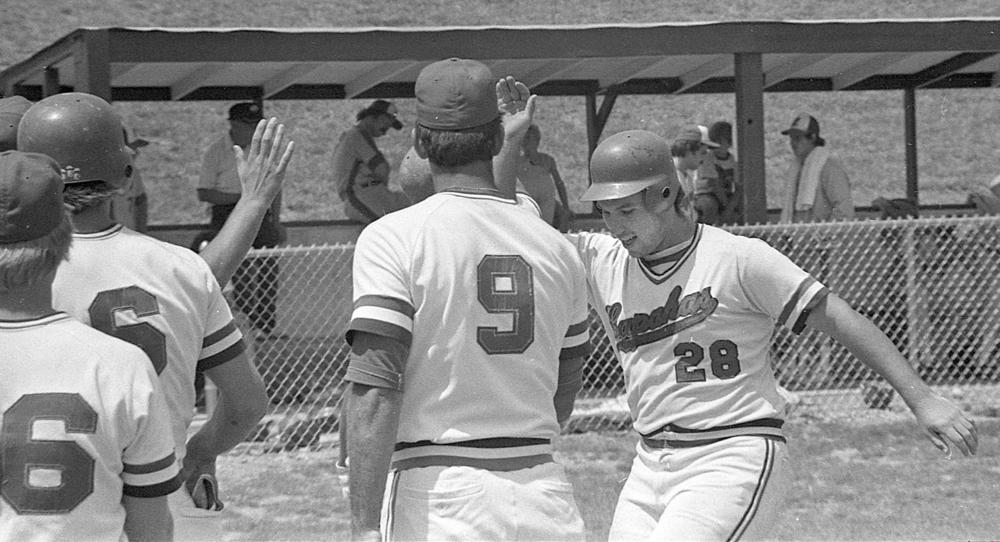 Steve Williams receives the glad hand from Clay Vangilder as he crosses home plate after slamming his second home run of the game amidst a 14-run sixth inning in the Missouri state championship game against Edwardsville, Illinois Saturday. Williams put on an awesome display of power, slamming three homers and driving home seven runs in the unbelievable 28-3 victory. (Jerry Wallace photos) 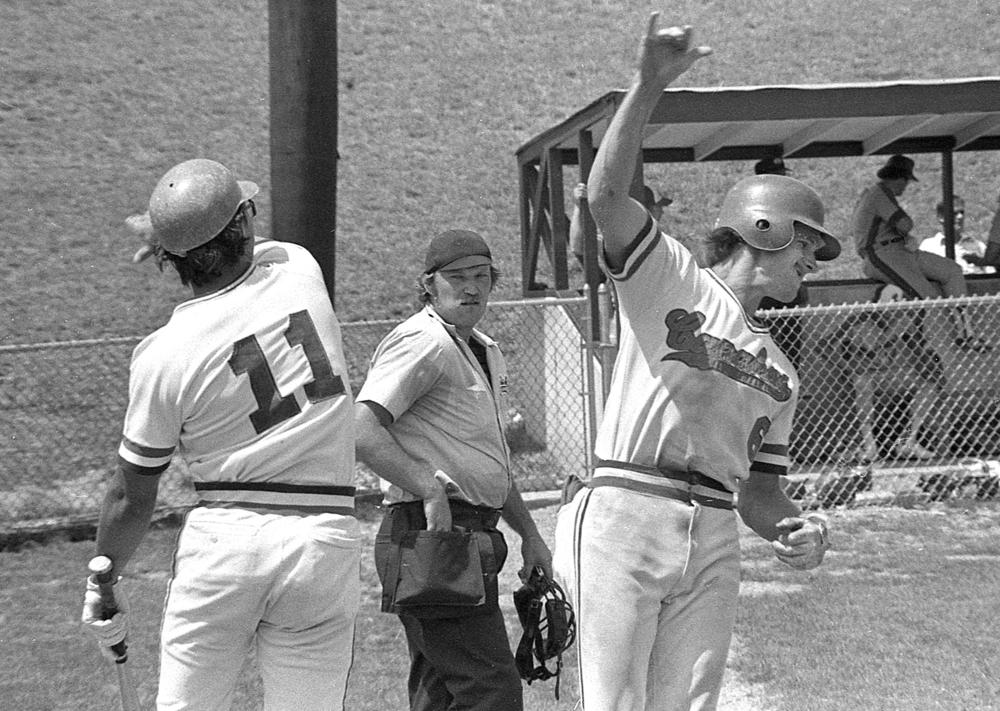 Dave Gross receives a high five from Chris Janet after his home run during the wild 14-run sixth inning against Edwardsville, Illinois during the Missouri state NBC championship game Saturday. The Capahas collected 22 hits and blasted out six homers in the 28-3 win. The Caps now will advance to national tournament play in Wichita, Kansas.

ST. LOUIS -- The preceding batter, Steve Williams, had just slugged his third home run of the game when the next batter, Chris Janet, scurried through the dugout with a perplexed expression on his face.

"Anybody seen the donut?" he queried as he prepared to take his turn at the plate.

"What do you need a donut for?" shot back teammate Scott Wachter.

However facetious, Wachter, had a point.

If the Cape Capahas weren't loose by now, then they never would be.

Williams' homer, the Capahas' sixth, capped a 14-run sixth inning that carried the Cape team to an incredible 28 to 3 victory over Edwardsville, Illinois in the championship game of the Missouri State Amateur baseball tournament.

"I was thinking it would be a close game," said center fielder Rick Wieser. "It was just a matter of hitting the ball where they weren't."

Like Williams, Wieser did just that, with a two-run homer and a grand-slam earlier in the contest.

Both Williams and Wieser finished with four hits and seven RBIs as the Capahas outhit their nemesis 21 to 8.

"We haven't lost any respect for Edwardsville," said Capaha manager Jess Bolen. "It's just one of those things that happens sometimes in sports. They [Capahas] believe they can score runs, and I'm not one to doubt it. We're capable of knocking out any pitcher."

Cape wasted no time in disposing of Edwardsville ace Steve Hosick, who played his freshman season at SEMO State a few years back. Wieser's first homer spelled a 2-0 lead in the opening frame, and an RBI double by Russ Deal made it 3-0 in the second and Wieser's grand-slam, after three bases on balls in the fourth, gave Capaha starter Keith Boeller a comfortable 7-1 cushion.

"It made pitching easier," said Boeller (9-0). "You knew you had something to look forward to."

Williams' first homer, a two-run tape-measure blast in the fifth, gave the Caps a 9-2 margin, and like Williams himself noted, "After that, it was like a shooting gallery."

Had it been a district fair, then the Capahas would have walked off with all the stuffed animals in the sixth, when they sent 17 batters to the plate and scored all their runs after two were out. In between, Williams' two blows in the frame, David Gross joined in the fun with his own round-tripper.

Did Boeller's arm stiffen during the long wait?

"Well, yes, but....By the time we got back out there, they weren't ready to hit anyway," the Capaha hurler smiled.

The Capahas added five more runs in the seventh, capped by a two-run single by Williams.

Just how do you explain such an onslaught?

"Clean living, I guess," reckoned Wieser. "You never expect this in the state championship. Boy, it was sweet."

Besides the four hits each from Wieser and Williams, Gross and Terry Kitchen added three apiece and four and three runs batted in, respectively.

"They wanted it and went out and got it," said Bolen. "That's the way you do it. You get right after them."

By winning the tournament, the Capahas had their $1,000 entry fee into the NBC National tournament at Wichita, Kansas, paid by the State Amateur Association. The local favorites will still have to meet other expenses for the trip west this weekend.

With one loss in the double-elimination tournament, the Capahas went home and returned the next weekend to play the Madison, Wisconsin team.

If the name doesn't ring a bell in your baseball memory, he was the National League's Rookie of the Year as a reliever with the San Diego Padres in 1976.

The Cape Capahas took a trip back in time here Saturday night and it was not a pleasant journey. Metzger, now pitching for the Madison, Wisconsin amateur baseball team, stymied the Caps on just six hits as Madison rolled to a 9-1 win in the National Baseball Congress tournament. The loss eliminated Cape from further competition.

"We just didn't look like ourselves at the plate," said Capaha manager Jess Bolen. "We were taking pitches we would usually jump at."

It could be that the Capahas were still weary from the night-long ride west. "But, you've got to give them credit," said Bolen. "They've got an outstanding baseball team."

Ken Bolek, unlike Metzger, didn't quite make it to the majors, stopping at AAA ball in the Detroit Tigers chain. But the Madison left fielder looked like major league material Saturday night, driving home six runs with a pair of two-run homers and a two-run single.

"They (Madison) have got good hitting, they don't kick it and they've got good pitching," Bolen surmised. "You put it all together and it's a tough team to beat."

Scott Wachter slugged a solo home run in the sixth for the Capahas' only run. David Gross added three singles and Steve Williams and Rick Wieser had the only other hits off Metzger, who walked just one and fanned eight.

Madison scored three off Capaha starter Keith Boeller in the third and kayoed the big right-hander with two more in the fifth. The Wisconsans roughed reliever Steve Hosick for four runs in the eighth. It was Boeller's first loss of the season after ten wins.

The season-ending loss left the Capahas just one win short of 30. Still, at 29-7, it was a most successful season.

"You can't frown on our season," said Bolen. "It's tough in baseball to only lose seven games."

The Capahas will arrive back in Cape Girardeau tonight.