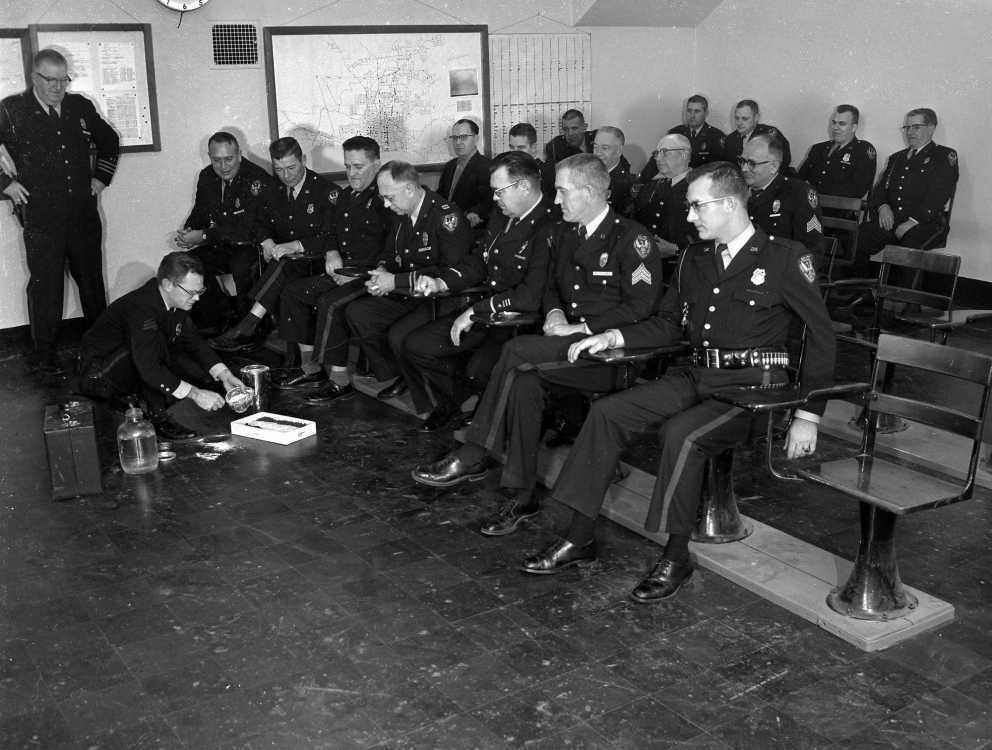 Getting Police Job is Not Easy

"The day has come and gone when you make a policeman out of a man on the street by pinning a badge on him and handing him a pistol."

These words have almost become a standard slogan for police departments and law enforcement agencies over the country and are used often in writings and speeches by authorities.

The Cape Girardeau Police Department holds no exception to the unwritten law. Its men are picked with care after they have met a set of requirements which have been carefully gone over and approved by Police Commissioner J.L. Wieser and Chief Percy R. Little.

First, a man must be 21 years of age, be a voting resident and taxpaying citizen of the city before he can even fill out an application for employment with the department.

If he meets the above requirements, he must then fill out a four-page written application. The next step is a lengthy written aptitude test of 100 questions.

Following an acceptable application and the successful passing of the aptitude test, the applicant then must go before a board where he is orally questioned and rated on appearance, manner, speech, adaptability and general impression.

Usually the board is composed of the commissioner, the chief, the two captains, the lieutenant and an outside man connected with law enforcement. Each member of the board rates the applicant individually as to his impression of him.

The applicant is graded numerically both on the oral and written tests, these two ratings figuring strongly in the selection of a prospective employe from the list of applicants when there is a vacancy.

According to the chief, confidential inquiries are made on the applicants and a great deal of consideration is also given to these answers and to his educational background.

When a man is accepted as a prospective employe, he must then undergo a rigid physical examination, be fingerprinted and photographed, the final steps before being hired.

The new officer's personnel record, complete with fingerprints and photograph, is made out and becomes a part of a permanent confidential record file. Each year, a consolidated efficiency rating is marked on the man's personnel record. Also any signed complaints against the officer in performance of his duty or otherwise are made a part of the confidential file, along with the results of an investigation into the complaints by his superiors.

This personnel record is important in the promotions of the man. When an opening exists in the rank of sergeant, all patrolmen who wish may apply.

How to Win Promotion

All applicants go before the board individually and are rated by each board member who takes into consideration his length of service, efficiency rating of past years, public relations record, general intelligence, attitude, professional knowledge based on a written examination, physical attributes and confidential record.

The grading is on a numerical system and the applicant with the highest score, after the ratings of board members are totaled, is selected for the promotion to sergeant.

Other promotions are also on a competitive basis although there is less opportunity for a promotion to higher pay grades, the chief said.

However, according to the national median and the annual inventory of traffic safety made in Cape Girardeau in 1958, the department is below the suggested manpower. The local police force has a 26-man staff while the recommended number of officers for a city of this population is 31 or 32, the chief added.