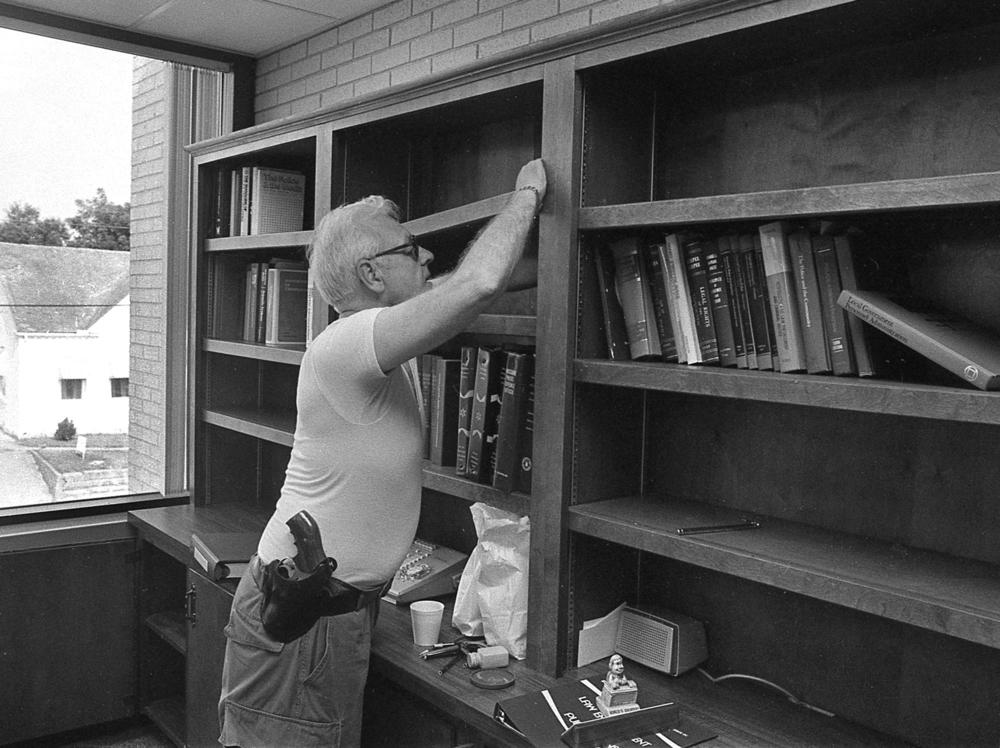 Chief Henry H. Gerecke traded his usual blue blazer for a T-shirt and green fatigues while moving books and other departmental papers into the new police headquarters at Sprigg and Merriwether Saturday, Aug. 14, 1976, from the old facility at 1 South Sprigg. (See more photos below.)

A first impression for those familiar with the old and introduced to the new is that you've stepped from the past century into the future.

Moving from quarters in a remodeled church to an ultra-modern brick and glass structure, the most sophisticated of its kind between St. Louis and Memphis, Cape Girardeau police are just hours away from the official "operations switch" at 11 tonight in new headquarters at the corner of Sprigg and Merriwether.

Furniture not moved will be auctioned in the near future, as will the stained glass windows that many have had their eye on. The old police station, for many years Grace United Methodist Church, will likely be razed in months to come, Police Chief Henry H. Gerecke said.

All police personnel, including Chief Gerecke, acted as "professional" moving men and women Saturday, wearing civilian clothes and toting only their service weapons as a reminder to the public that they were still law enforcement officials.

The new police station, which has been in the planning stages since 1973, features a cosmopolitan design, both on the exterior deft masonry-glass work and inside the impressive two-story structure that also features a basement.

The building was constructed with off-white brick and block and has fixed bronze tinted glass that gives the appearance of a bronze mirror in the daytime with a dual purpose of insulating the 17,547-square-foot facility.

Other windows are security tight, equipped with tool-resistant steel bars installed in the glass. They are glazed with a polycarbon finish that produces a more attractive appearance than barred windows.

The ground floor of the headquarters, built by Sides Construction Co., has a lobby, a waiting area with 17 seats and desks for the news media and insurance agents. Also on this floor are the clerical offices to the right of the entrance, a file room, a captain's office, records room, maintenance room, storage area for stolen goods and a hall leading to the traffic division and the city court judge-clerk's office.

The most impressive place on this floor is the communications room, where the most sophisticated telephone communication system available is set up.

The system, known as "Dimension," is a solid state computerized mini-telephone network offered by Southwestern Bell Telephone Co. for business, industrial and institutional customers having up to 400 stations.

There are more than 90 features on the new telephone system, which will record all phone calls on a 24-hour tape, thus eliminating excess paperwork.

"The system will eliminate having to make a log, and along with that it gives us the opportunity to go back and check information if necessary," said Chief Gerecke.

Besides monitoring telephone calls, Dimension acts as an intercom and paging system and will record all radio communications.

Included in the communication room set-up are four portable video screens that allow views of the parking lot, halls and the cell block, located on the second floor. The cell block is equipped to handle 32 prisoners, including facilities for four women and four young adults. An audio system is also connected in immediate areas near the cells and also to the Common Pleas Courthouse and city schools.

The idea to establish in the courthouse and schools was to detect thefts during periods when the buildings are not open.

A two-car receiving garage accesses off the parking lot at Merriwether. Automatic doors will allow officers to take suspects into the station and the booking area on the first floor before transporting them to the second floor by elevator.

In addition to the regular cells there will be a padded cell, private visiting booths where prisoners will be allowed to visit by looking through a glass and talking via a screening system. The kitchen, laundry and a miscellaneous storage area are near the cell block.

This floor will also have an all-purpose squad room complete with desks and chalkboard, officer's locker rooms, rest rooms and a uniform storage area. Chief Gerecke's office will be located on the second floor along with a conference room, a main gun storage room, locked file room, a detective laboratory and detective's offices, the lieutenant's office, two interrogation rooms, an observation room, a prisoner-attorney room, a polygraph room and an evidence room.

The basement will house a four-stall, 50-foot shooting range that can be utilized for either day or night shooting practice, an equipment room for telephone and burglar alarms, air conditioning, heating units and storage. An emergency power unit is also located here that will provide energy within six seconds in case of a power outage.

Access to the second floor, other than the elevator, may be gained by use of two staircases.

Chief Gerecke is confident the move into the new station will give officers additional incentive to act as professionals.

"It will give us a professional building to operate out of. It is compact and all of us are looking forward to enhancing our abilities," he commented.

The chief noted, "You give a craftsman the proper tools to work with and he will do a better job. That is what we will do here." 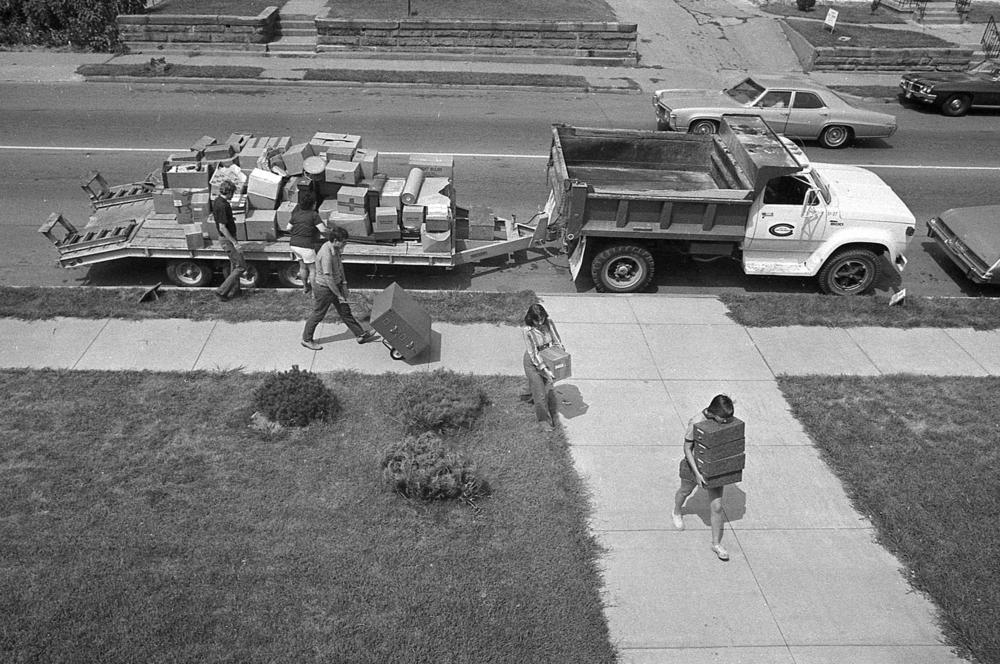 Cape Girardeau Police Department personnel were busy Saturday, Aug. 14, 1976, moving boxes of departmental papers and other materials into the new police headquarters at Merriwether and Sprigg from its old facility at 1 South Sprigg. 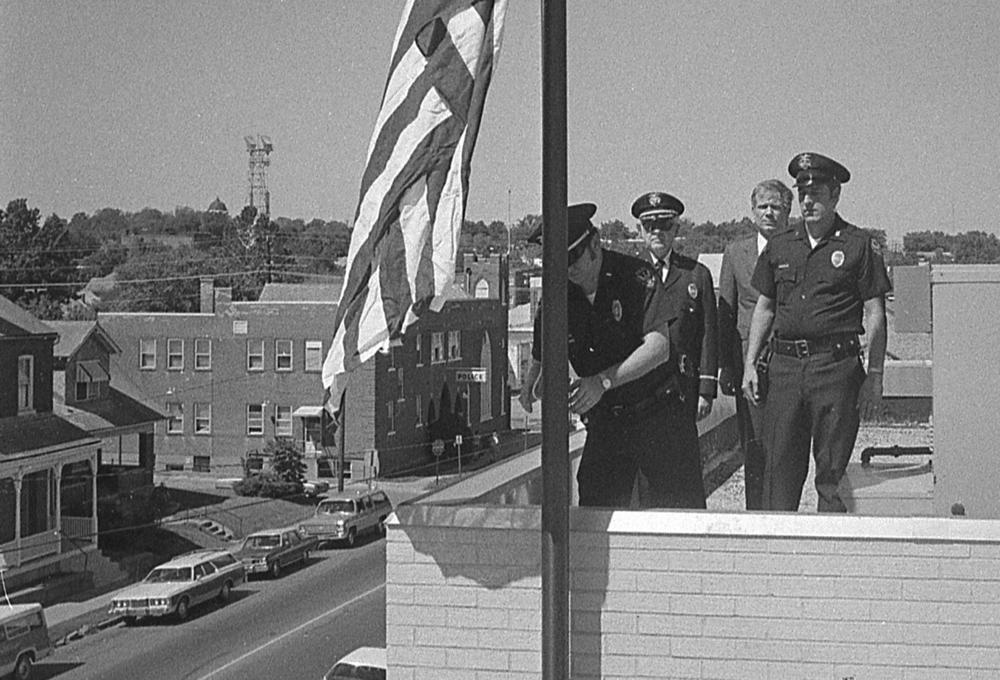 Above, during dedication ceremonies of the new police station Sunday, Sept. 5, 1976, Lt. Howard Boyd Jr. raises the flag given the city that was flown on the state Capitol. Watching Lt. Boyd are Chief Henry H. Gerecke, U.S. Rep. Bill Burlison and Reserve Sgt. Ed Williams. Seen in the background is the former city police station, which had been the old Grace United Methodist Church, at Sprigg and Independence. 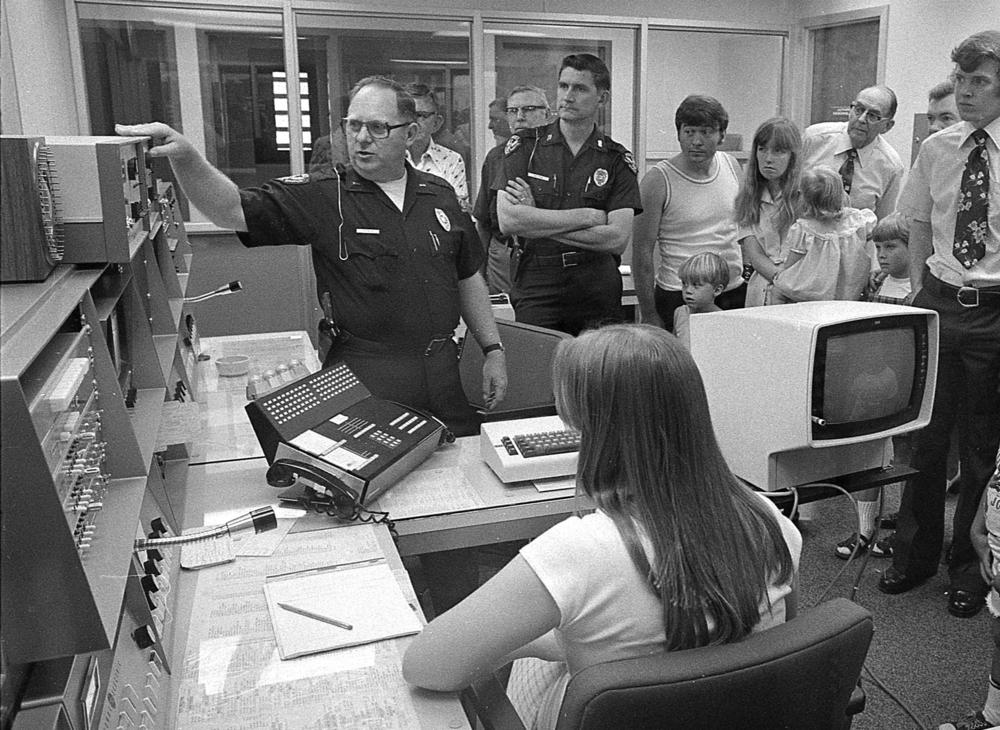 Above, Lt. Robert Ross, left, and Ptlm. Carl Pease give a tour of the communications room after dedication ceremonies at the new police station, seen below. (Fred Lynch photos) 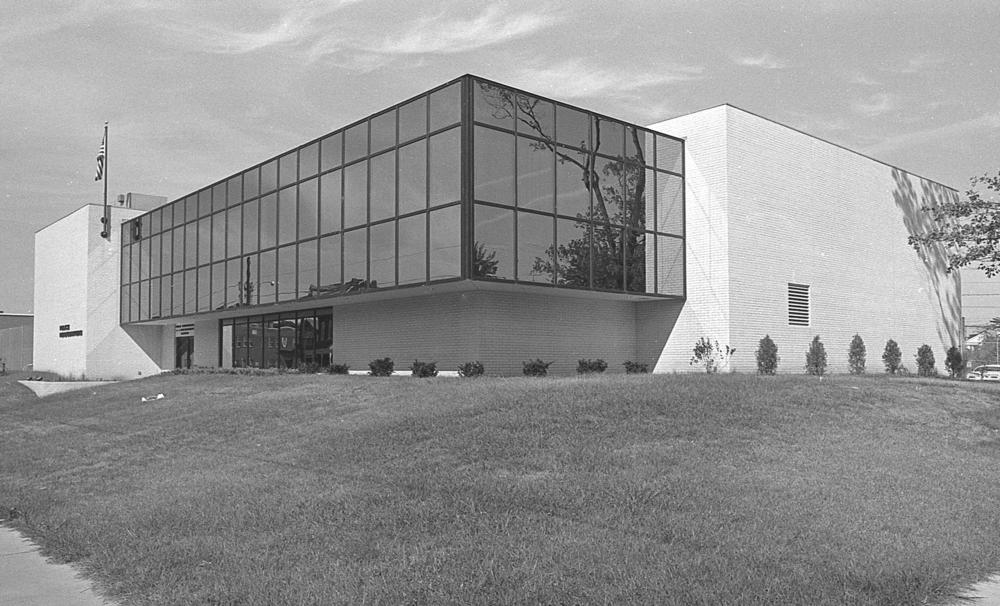 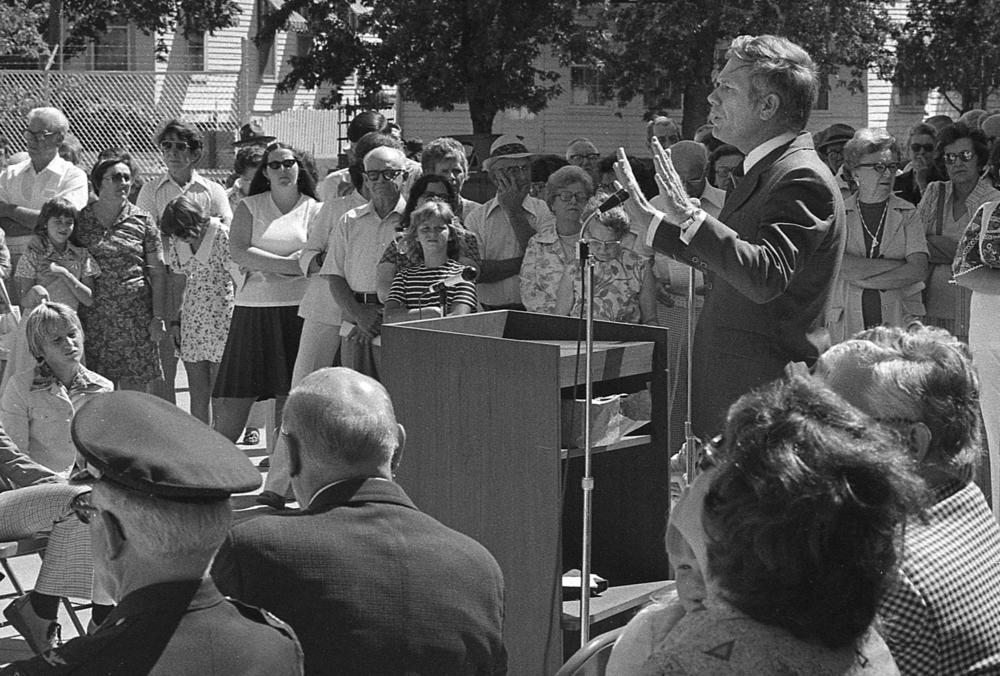 Dressed in his police uniform and looking like a proud father, Police Chief Henry H. Gerecke greeted many visitors individually to the dedication ceremonies Sunday afternoon at the new police headquarters.

More than 2,000 persons turned out to tour the facility.

Chief Gerecke said he was pleased with the turnout and even surprised that so many people attended the open house.

In his opening remarks during the dedication ceremony, Chief Gerecke thanked the city and Mayor Howard C. Tooke for providing the funds to construct the $825,000 station.

Mayor Tooke, who spoke next, went on to thank Congress for making the funds available through the revenue-sharing program.

Tenth District Rep. Bill D. Burlison, D-Cape Girardeau, was then introduced. He told the audience the revenue-sharing program should be studied more closely on a yearly basis.

"The revenue-sharing program is short of perfection. We should strive harder to find perfection," he stated.

Mr. Burlison stressed the fact government has always been imperfect and always will be and that it is the job of the voters to put people in office who will work to improve the government.

The congressman continued by saying that the police station stands as an edifice of what good government cooperation can do.

The communications room with its highly sophisticated equipment attracted the largest crowd of people.

Lt. Robert Ross and Ptlm. Carl Pease were more than willing to explain how the new telephone system works and demonstrate the computer.

The remainder of the station, however, did not escape inspection. Visitors were allowed to tour the entire station and did so with the thoroughness of building inspectors.

The jail cells also proved to be a drawing attraction. The 32-bed cell block is much improved over cells provided in the old station.

Construction of the 17,574-square-foot building began on May 20, 1975. The police department moved into the new station Aug. 14 and operations at the new station began Aug. 15.

Here is a photo gallery of the police station from 2013:

Before moving into the old Grace United Methodist Church in 1960, the Cape Girardeau police department shared space in the old Fire Station No. 1 at Independence and Frederick streets. That building is the present Cape River Heritage Museum.