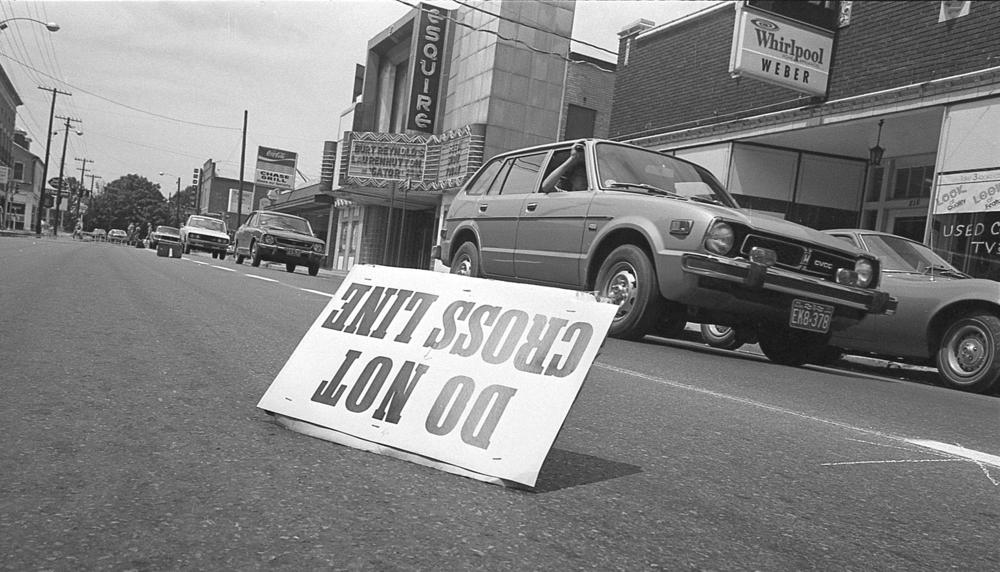 Broadway officially became one way from Pacific east to Main Monday morning, Aug. 9, 1976, and despite several motorists not heeding directional signs, traffic flowed fairly smoothly. Above, a sign warning drivers not to cross a freshly-painted line lies askance after one car did just that. Below, a view was taken on Main looking south toward the Broadway intersection. 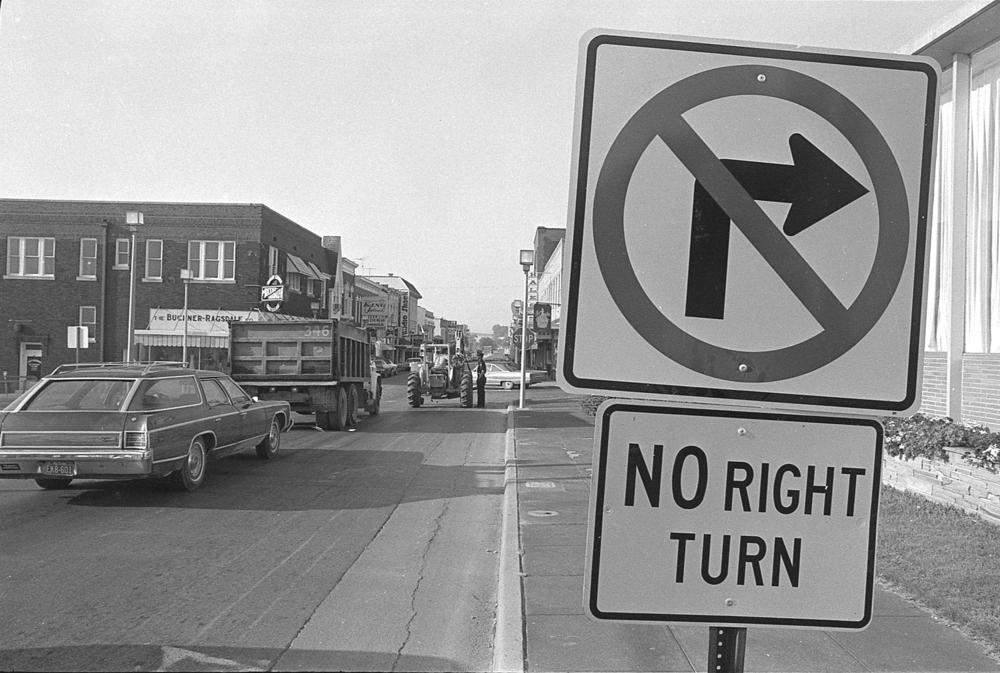 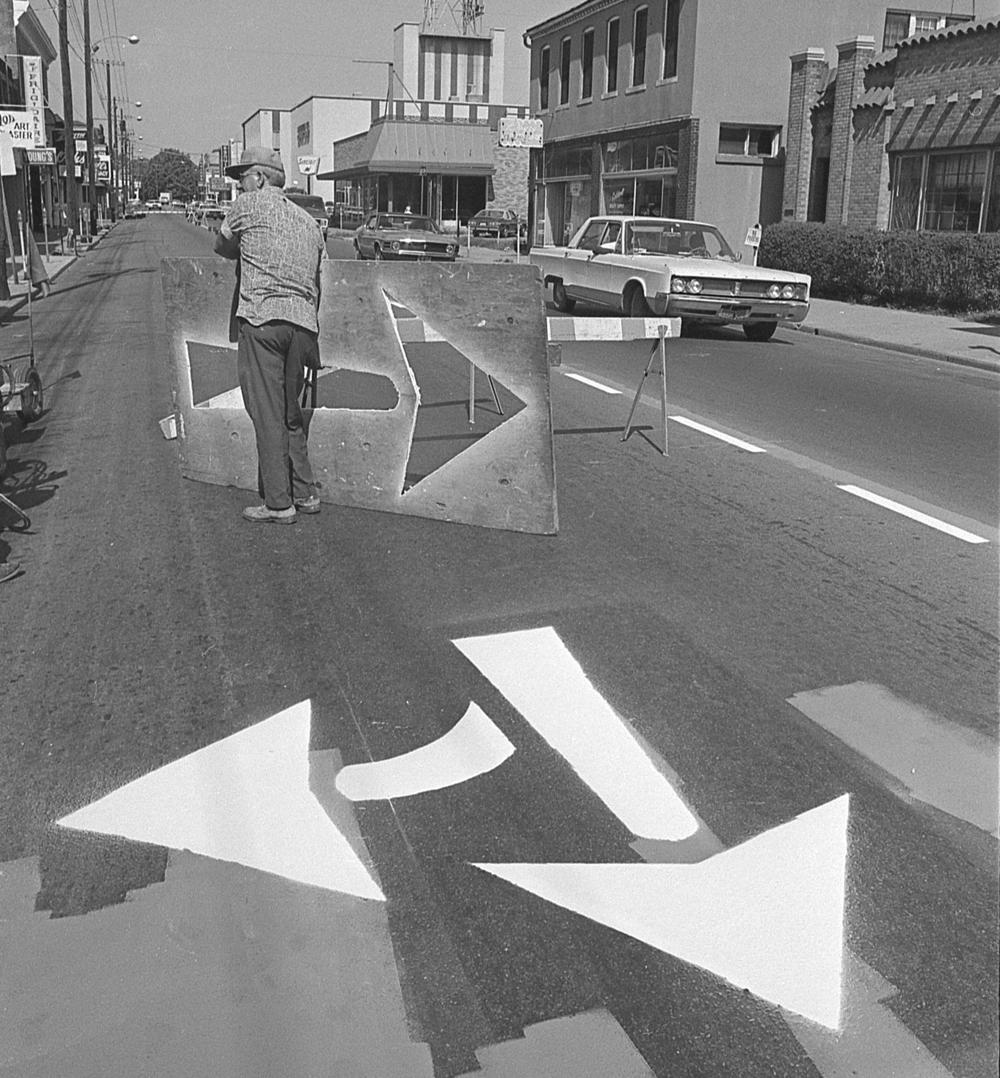 Above, Virgil Moore, an employee with the city Street Department, helps paint directional arrows at Broadway and Sprigg. 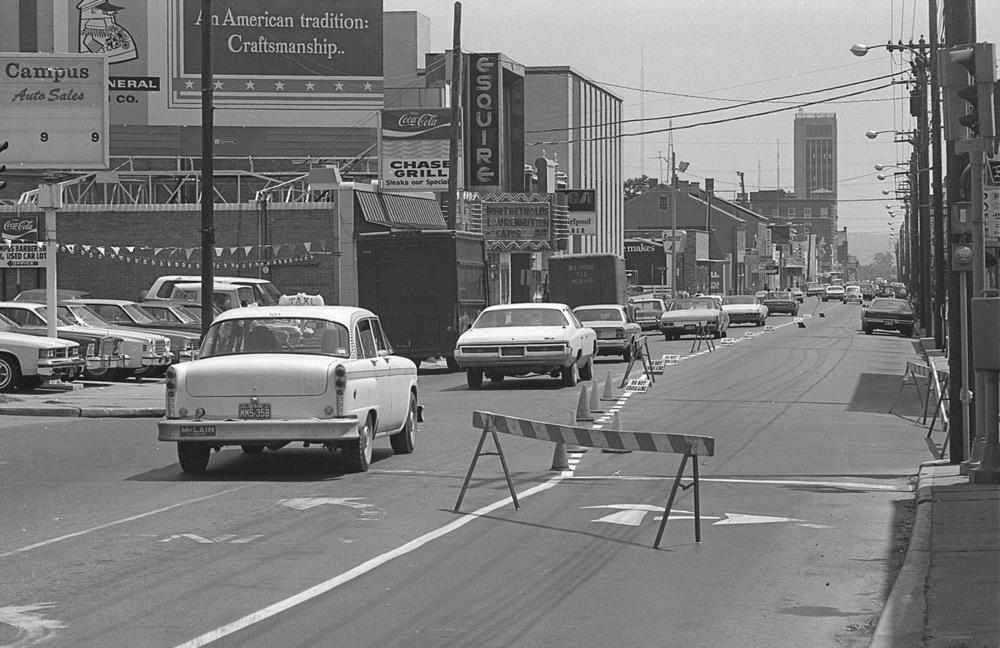 A view east on Broadway from near Pacific street. "Gator" starring Burt Reynolds and Lauren Hutton was showing at the Esquire Theater. (Fred Lynch photos)

One-way was the wrong way.

One-way was the right way.

Only which was which confused some motorists and turned opening day of Broadway one-way east from Pacific to Main into something of a haphazard event that, luckily, resulted only in a few traffic warnings but no accident.

Several motorists were observed traveling west along Broadway, oblivious to the startled glances and shouted directions from drivers proceeding in the right direction.

Broadway is the third major downtown thoroughfare to convert to one-way traffic. Main street southbound from Broadway to William and Spanish street from William to Broadway northbound went one way Nov. 5, 1956.

Police chief Henry C. Gerecke said he believed traffic flowed "rather smoothly" Monday. "People seem to be adjusting to it, although it will take some time."

Clent Proffer, lineman for the Street Department, said most markings at intersections east on Broadway have been properly marked, and that work is continuing on side street markings indicating left or right turns.

Ptlm. Norval M. Friese, traffic officer, said that Broadway traffic flowed well but was congested because of barriers erected to alert motorists to work being done by the Street Department.

Themis street traffic was slowed somewhat by an increased flow of westbound vehicles, and at one point Monday cars were lined up from Frederick to Sprigg on Themis, putting westbound traffic at a virtual standstill.

One motorist complained that a normal five minute trip from Fountain to Themis and South Boulevard took 15 minutes Monday. Bellevue traffic was steady, with few tie-ups during rush hour periods.

Chief Gerecke said he expects traffic to be smoother today with removal of most barriers. Main street traffic moved without difficulty, police said.

The one-way traffic pattern lasted until Sept. 22, 1983 when two-way traffic was restored.