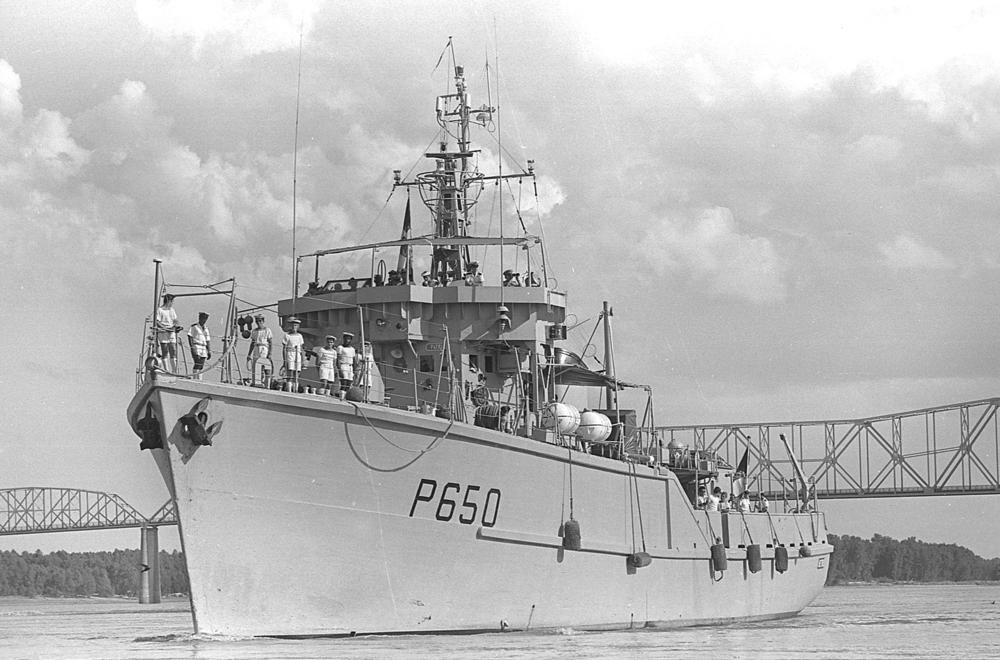 The Arcturus, docking on the Mississippi River at the foot of Broadway Tuesday night, has traveled through southeastern waterways to commemorate the decisive role that France played in the War of Independence and to help celebrate the nation's Bicentennial. Below, Mayor Howard C. Tooke welcomes Arcturus' Capt. Jean-Pierre Laurent (in uniform) and Jacques Lardet, French consul from Chicago, who is acting as interpreter. 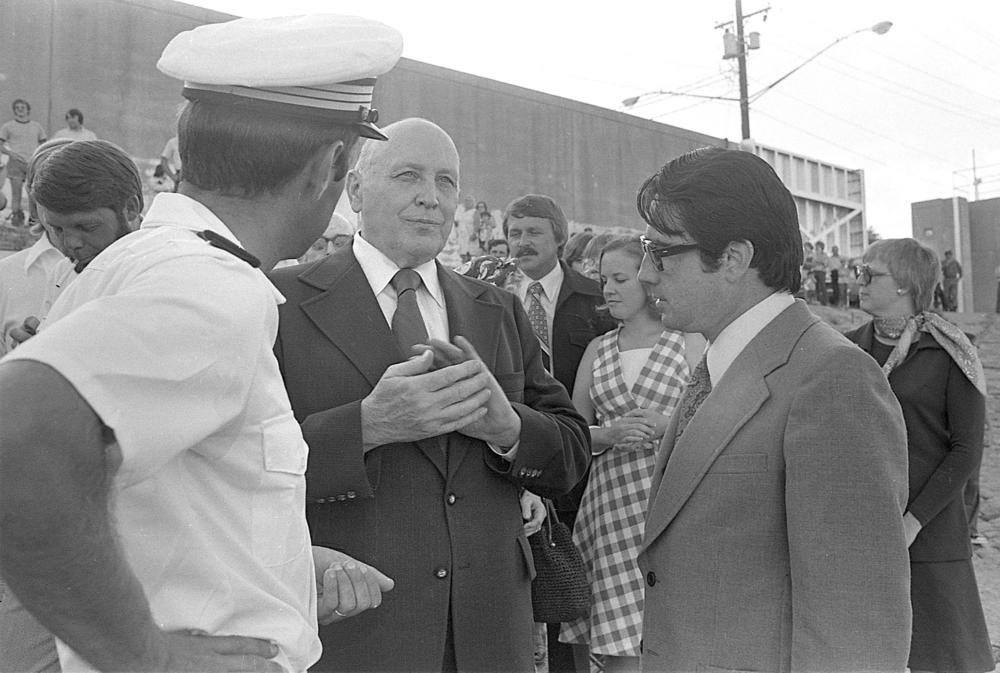 A Bicentennial mission of friendship successfully crossed the distance and language barrier Tuesday night with the docking of the French patrol ship, the Arcturus.

Hearty handshakes and warm smiles on the faces of the French crew members and the Cape Girardeau residents welcoming the ship was sufficient to establish a friendly camaraderie between the two groups.

The ship's Capt. Jean-Pierre Laurent was presented with the city's Bicentennial Medallion by Mayor Howard C. Tooke, as both local residents and crew members watched with interest.

Capt. Laurent, in a relaxed manner, spoke of the warm welcome he has been receiving on the many stops the ship has been making. The voyage, he said, has been very enjoyable and pleasant but a little difficult because there is so little time to just relax.

The ship, which used to be a mine detector, was converted to a patrol ship and is stationed at Martinique in Antilles. Midshipman Jean Francois LaBarde said the ship is used for patrolling the seas from Brazil to Canada.

Preceding a dinner honoring Capt. Laurent and the crew, interested persons were allowed to roam the ship and the ship's mascot, a shaggy red-haired dog named Mary Lou, was allowed to roam the floodgate area and observe all the people coming and going.

The crew members, who by now were used to all the staring, questions and picture-taking, were more than willing to oblige everyone and seemed to enjoy every moment of it.

One 18-year-old gunner, Eymond Noel, said, "This is probably the only time we'll come to America and it is nice."

The dinner honoring the crew of the ship was held at the University Center. All members of the welcoming committee and SEMO State University president, Dr. Robert E. Leestamper, were present at the dinner.

Capt. Laurent presented each of these persons with a commemorative medal minted by the French government.

Crew members had shore leave after dinner and took advantage of the time to sight-see.

The ship left at 8 a.m. today for Ste. Genevieve where it wall stay for a two-day visit, and then journey on to St. Louis for the Bicentennial celebration there.