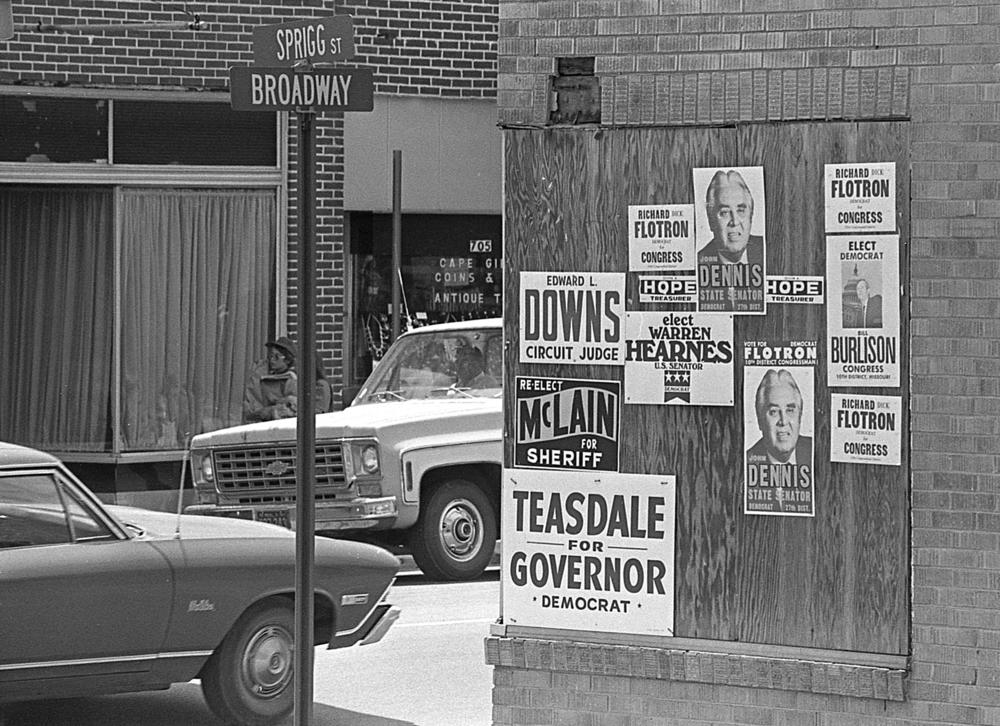 Campaign signs for political candidates can be seen almost everywhere now that the Aug. 3 primary is nearing. Though they may be up, they aren't necessarily legal in the city. Ordinances prohibit the affixing of such notices or posters on buildings, poles and trees except with the permission of owners. Here, signs are plastered on a building on the northwest corner of Broadway and Sprigg.

The vacant building, formerly Chris Cross Cafe, was razed. It was next to Broadway Prescription Shop. The site is now green space. Here is a previous blog with a photo of the restaurant:

Signs point to only one thing...there's an election coming up

Election-year sign mania is beginning to take its toll.

What many are calling an eyesore, as campaign signs proliferate and seemingly multiply on light poles, trees and nearly every available structure in sight.

City ordinances in Cape Girardeau specifically prohibit posters or notices being placed on fixed structures, poles or trees and vehicles as well.

Ordinance 395-16 states, "No person shall post or affix any notice, poster or other paper or device, calculated to attract the attention of the public, to any lamp post, public utility pole or shade tree, or upon any private structure or building, except as may be authorized or required by law."

Ordinance 395-11 warns that "No person shall throw or deposit any handbill in or upon a vehicle, provided, however, that it shall not be unlawful in any public place for a person to hand out or distribute a handbill to any occupant of vehicle who is willing to accept it."

Despite the ordinances, signs remain to be seen throughout the city.

City Attorney Thomas M. Utterback said he has received calls from persons issuing complaints about signs being placed on their personal property. Other calls have resulted because signs are said to block the vision of motorists, and because they often tear away from posts or buildings and create a litter problem.

Should litter result from signs or posters blowing from a business, the owner or establishment, not the candidate or person posting the sign, is responsible for clearing the area.

Mr. Utterback admitted some candidates are in violation, but added that they are cooperative to remove signs as requested.

"We hope the candidates comply with the law and for the most part we believe they have," he said.