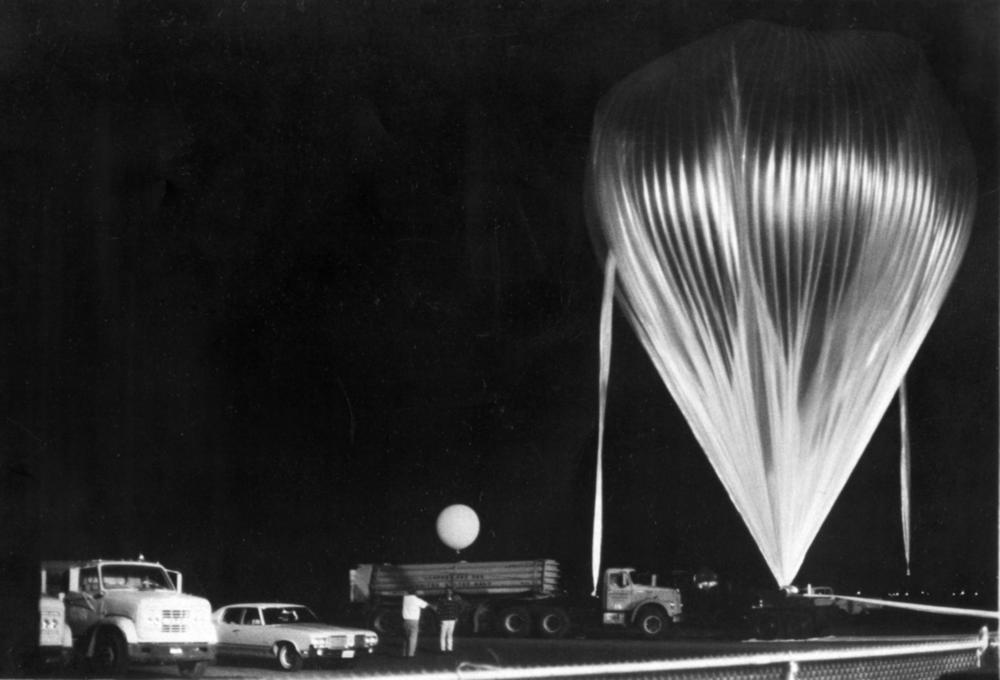 Just prior to the launch of the first in a series of six stratospheric balloons from the Cape Girardeau Municipal Airport, a helium-filled bubble in the top of the balloon was held stationary as men and vehicles stood ready. The smaller sphere in the lower left of the bubble was a small balloon used to test wind direction and was released just minutes before the launching at 2:05 that morning. The balloon's payload consisted of scientific apparatus to study cosmic radiation in the Earth's upper atmosphere. (Southeast Missourian archive)

You've got to wake up pretty early in the morning these days to witness a balloon launching.

There were few spectators, however, when the first of a series of six stratospheric balloons were launched from Cape Girardeau Municipal Airport way before dawn today.

This first launch of any large-type balloon from the airport here was termed "as near to perfect as you can get," by Maurice Faulkerson, launch director for Raven Industries of Sioux Falls, S.D., launch contractor.

The project is under the direction of the research division of the U.S. Navy and Raven Industries in cooperation with research teams from four universities and NASA.

"The entire launch operation ran very smooth...the liftoff was smooth and sent the balloon and payload in a westerly direction---there was no excess shock in the flight train...it was launched under ideal conditions," Mr. Faulkerson observed immediately following the takeoff.

The payload, weighing close to 1,000 pounds, consisted of a gondola, parachute and scientific apparatus weighing approximately 700 pounds and almost 300 pounds of ballast material to be used in maneuvering the balloon.

Scientific apparatus sent up on the first flight included instruments provided by the University of New Hampshire, Durham, to study the charge composition and isotopical composition of cosmic radiation particles and two ionization chamber systems provided by Raft, a physicist with the U.S. Atomic Energy Commission, and Dr. Hugh Anderson, a professor in the space science department at Rice University, Houston, Tex.

Plans for the balloon flight were filed at 7 Sunday night with the Federal Aviation Administration flight service station at the airport in order that they could send notification to other FAA stations nationwide. Actual preparation for the launching started about 11:30 that night.

Prior to actual launching, small balloons were launched by hand to observe the speed and direction of the wind. At 2:05 the balloon was released from its spool and 30 seconds later hovered for an instant over its payload and then lifted off in a westward ascent.

As the part of the balloon carrying the bubble of helium was released, the gas began to expand, slightly enlarging the balloon. The launch truck carrying the payload moved slowly forward and slightly to the right for a distance of about 60 feet to keep any slack from developing in the balloon train--the portion stretching down the runway which had not yet filled with helium.

The conditions for launch were indeed ideal. The sky was clear with visibility at two miles hampered only slightly by ground fog. Surface winds were calm at about five miles per hour maximum.

The balloon itself was 430 feet in length when stretched out along the runway. At maximum altitude, it is capable of expanding to 316 feet in diameter and carrying 11.6 million cubic feet of helium.

As soon as the balloon was launched a tracking and control system set up in a trailer by Raven began its operations. Concurrently, members of the New Hampshire team and Dr. Anderson began monitoring their receiving and recording instruments in an old hangar at the airport in a vigil which will continue throughout the balloon's entire flight.

Members of the team will take turns monitoring the equipment and changing the tapes on which all information analyzed by equipment on board will be recorded.

After launching, the balloon began rising at a rate of approximately 1,000 feet per minute and was expected to take between 3 1/2 and 4 hours to reach its desired altitude of 135,000 feet. The balloons horizontal velocity started out at approximately 30 miles per hour, but this morning was heading west from Cape Girardeau at about 40 miles per hour.

The balloon and instruments are expected to remain in the upper atmosphere until 6:30 tonight, but could remain aloft until about 6 Tuesday morning.

When the decision is made to terminate the balloon flight, a signal will be sent via Raven's telemetry communications system to cutters to sever the wires holding the balloon to the payload. The payload will drift to the ground attached to a parachute.