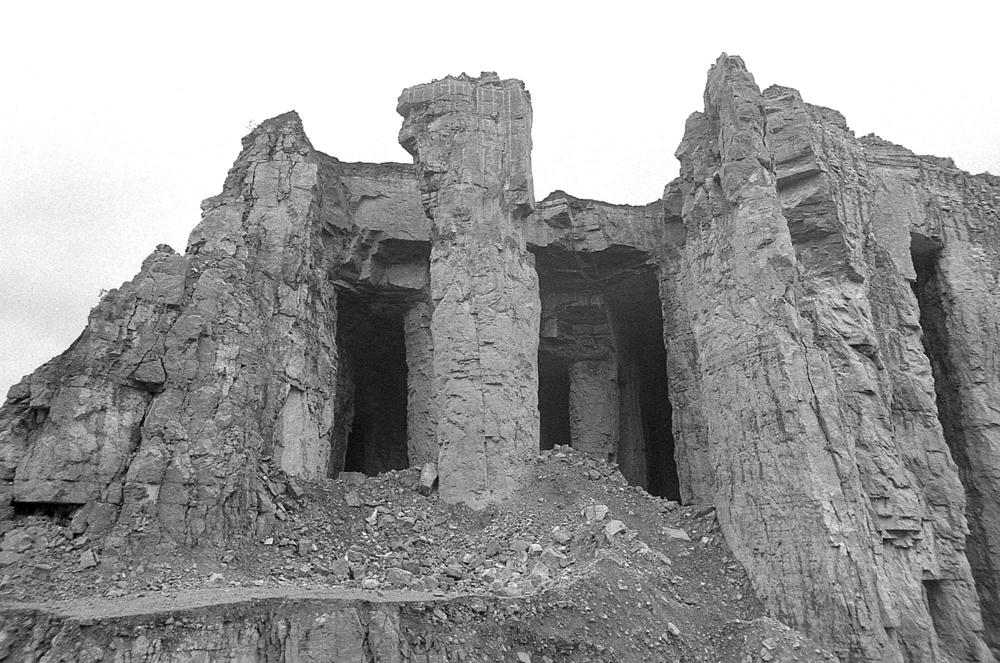 Caverns of the Marquette Cement Co. quarry are part of the rock structure that was to come down this afternoon when 600,000 pounds of dynamite are detonated to provide stone for the new Marquette plant from a five-acre section of the quarry. A vibration consultant with Vibrotech Co. of Florissant said the blast probably would not be heard throughout the city because it will be underground. Noise will carry the farthest downwind from the blast, which should sound similar to a sonic boom, he said. There should be little earth vibration except for near the quarry, he explained. In photo below, explosives experts plant the dynamite in one of the many holes that were drilled as deep as 200 feet into the rock. 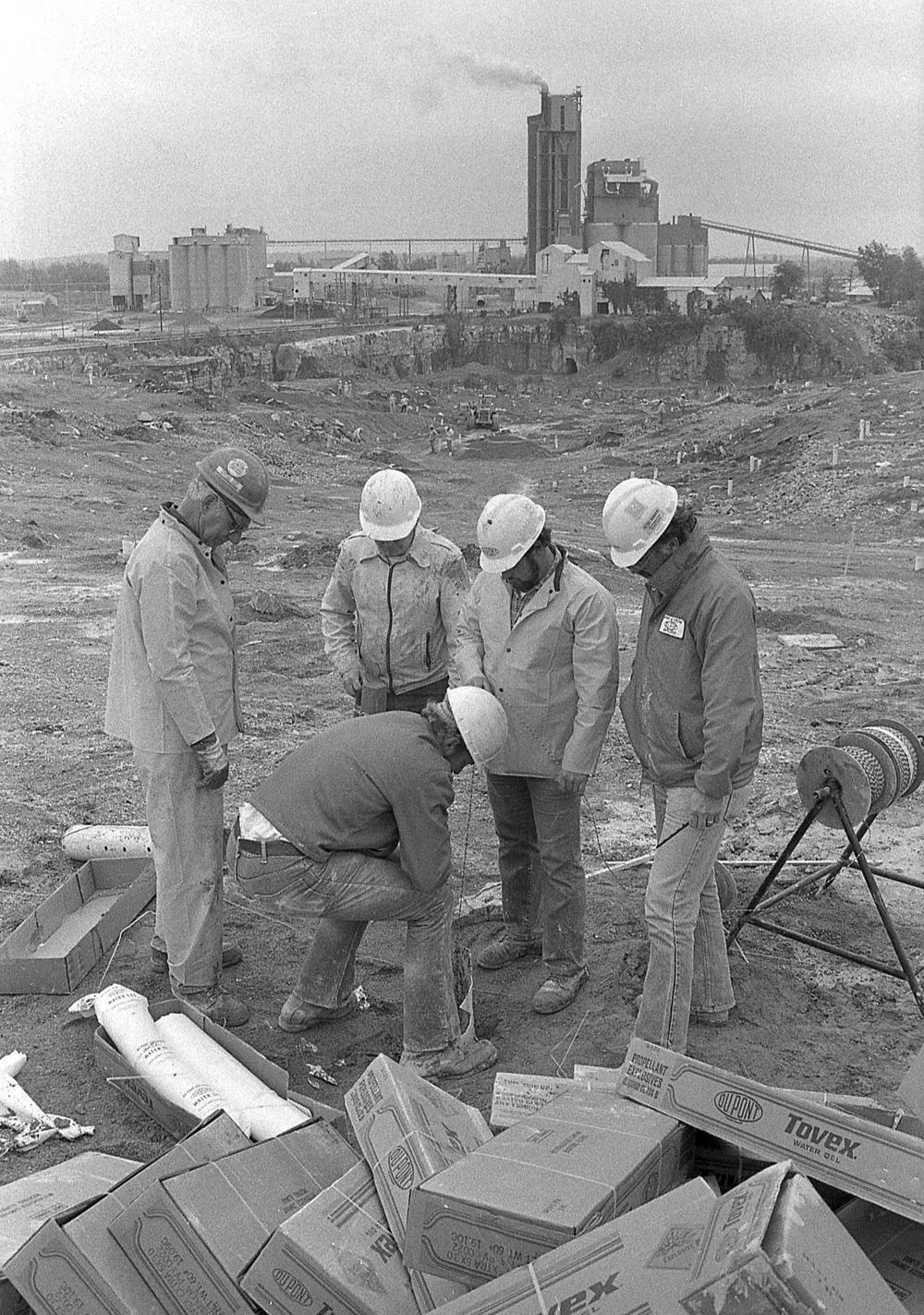 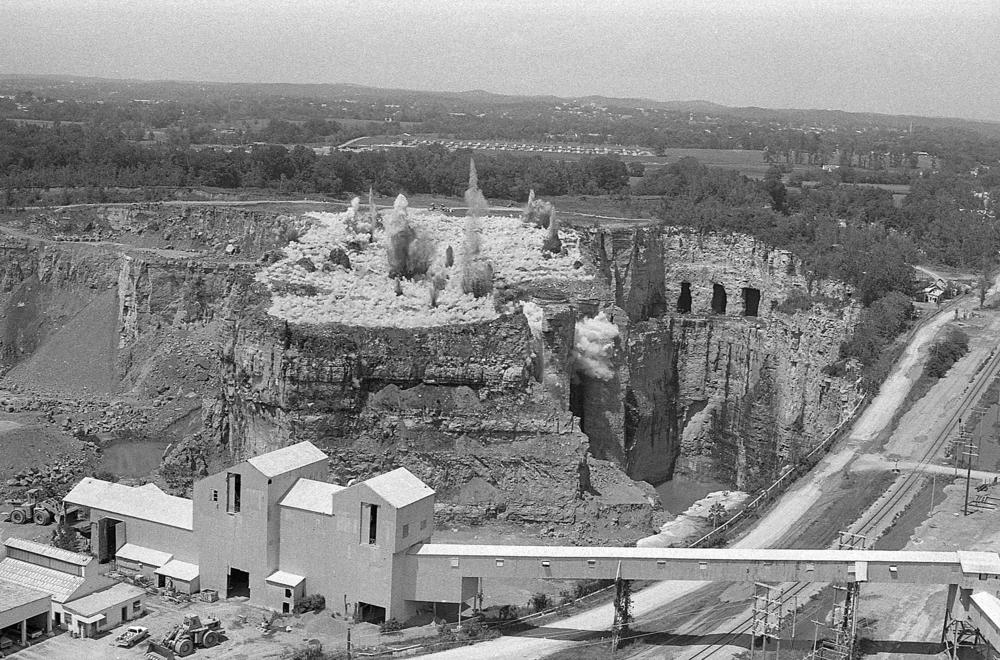 These photos show the force of 600,000 pounds of dynamite being detonated in hundreds of underground holes on five acres of limestone at the Marquette Cement Co. quarry Friday afternoon, May 15, 1981. The pictures were taken from on top of the company's new plant across South Sprigg from the quarry. (Fred Lynch photos) 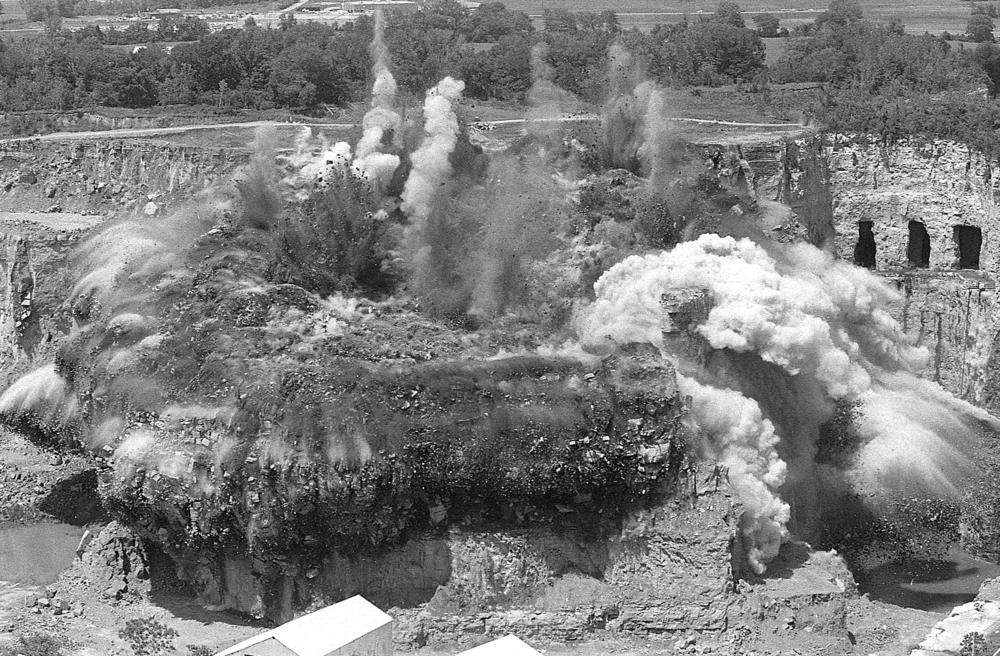 Those who have lived in Cape Girardeau a number of years can recall when dynamite blasting at the Marquette Cement Co. quarry along South Sprigg was a frequent occurrence. Residents were accustomed to the blasts, which usually could be heard throughout the city, then much smaller in size.

There has been very little blasting in the quarry in recent years. But not even when blasting was common, had there ever been a quarry blast like the one that took place Friday afternoon. Those who witnessed it were awed by the spectacle.

Many, including this reporter, who viewed the almost simultaneous underground blasts of 300 tons of dynamite from high above the quarry atop Marquette's new plant, experienced feelings of excitement and uneasy apprehension as they awaited the explosion.

They had been assured they were safe at the top of the 25-story steel structure. But the uneasiness still was there. Could something go wrong? Could the huge plant crumble from the vibrations of the blast?

It didn't, of course. In fact, there was only the slightest hint of any vibration when the five acres of limestone and dirt was blown by explosive experts of E.I. DuPont de Niemours and Co.

The hundreds of separate explosions that occurred as deep as 200 feet below the surface of the blast area took place in less than one second, at about 2:06 p.m., sounding like one giant explosion rather than the series that actually occurred.

The consulting firm which had investigated the noise and earth vibration effects that would occur had said it would sound like a sonic boom, although much louder, to those in the immediate area. And that is what it sounded like.

The blast could be heard as far north as the central business district of the city, but it carried farthest easterly because of the direction of the wind. Some who were downtown when it occurred reported feeling slight vibrations in some buildings, but nothing significant.

Two months had gone in to planning the explosion, which was necessary to reach approximately 1.5 million tons of limestone for cement production in Marquette's new multi-million dollar plant. And despite the unanticipated loss of a building at the bottom of the quarry, company officials said they were pleased with the project, which they estimated will cost Marquette between $200,000 and $300,000.

The time had come, and all eyes from out vantage point on top of the plant stared toward the blast area as a loud horn sounded a series of short blasts to forewarn of the explosion. Camera crews, including a video tape photographer for the Army, who was recording it for demolition training purposes at Ford Leonard Wood, had already focused on the site.

The blast was stunning, even with the loud background noise of operating machinery in the plant below.

When the dynamite that had been planted throughout the site blew, the thin layer of ground that covered the limestone first turned almost pure white as dust from the exploding limestone below found its way to the surface.

That sight lasted only the shortest of seconds. Suddenly, the blast area disintegrated as huge boulders spewed outward into the quarry in a mass of developing thick dust clouds that would eventually consume the entire quarry.

It didn't take long--maybe five to 10 seconds--for the flying boulders of rock to settle. At one point before they settled, a huge, billowing mushroom-shaped cloud, yellowish in color, developed directly over the blast area as grayish-colored clouds of dust were sent outward, filling the entire quarry.

Soon the dust began rising high from throughout the quarry. It then began its drift northeasterly with the wind that was blowing moderately out of the southwest.

The dust now was drifting toward the plant. Soon the plant was engulfed in dust, and from our vantage point on the top of the plant, it appeared a very thick fog had rolled in. It cleared completely in about 10 minutes, as the dust, which now was beginning to dissipate, rolled out over the Mississippi River before disappearing.

Some of the dust clouds did not drift out of the quarry. An hour after the explosion, one could still see its effects as the dust still hung in the lowest parts of the quarry.

There still stood a huge mound of rock at the farthest point of the blast area that extended into the quarry, but by far, most of the area had collapsed.

To prepare for the blast, crews began drilling 850 blast holes on the site about two months ago on a 15-by-15-foot pattern. It was into these holes that the dynamite was dropped. The deepest 200-foot holes contained as much as 1,400 pounds of dynamite.

The demolition experts used 20,000 pounds of Purex Extra and about 580,000 pounds of Tovex Extra, both provided by DuPont. It took most of the week to transport the dynamite to the plant in several trucks.

Some of the holes had as many as five possible ways to be fired. A non-electric detonation system was used for safety reasons.