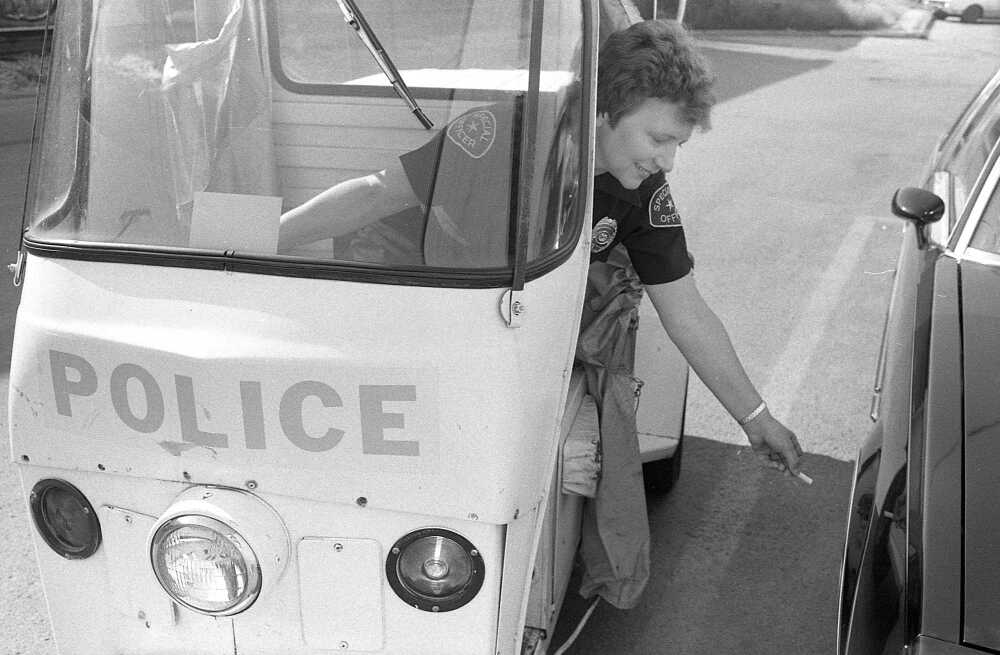 In her second day on the job today, police aide Kathy Payne marks the tires on a car on Water street. She is one of two women hired by the city recently as part of a new system of administering parking tickets and fines.

Cape Girardeau residents who receive parking tickets will no longer need to be processed as if they had committed a major offense. Beginning Friday, a new system will go into effect which will make paying a parking ticket as painless as mailing the monthly phone bill.

For years the system for issuing and paying for parking tickets in the city has been complex and time consuming. Parking offenders for non-meter violations were issued a "dummy" ticket instructing them to appear at police headquarters, where a more formal ticket would be issued. After the city council ordered the meters removed, even overtime parking offenders were required to appear at Police Headquarters for a more formal citation.

At headquarters the housewife who had taken just a little too long trying to pick out the perfect birthday present, or the businessman who had parked on a yellow line just so he could run into the drug store to pick up a paper, was asked to answer many of the same questions inquired of more serious offenders: Height? Weight? Age? Driver license number?

After receiving this second ticket, called a Missouri Uniform Traffic Summons, the offender would be asked to pass down the hall to the Municipal Court clerk's office to pay the appropriate fine. Overtime parking and most other fines are $10, according to the municipal court clerk. The amount of the fines will remain the same.

According to Police Chief Henry H. Gerecke, the whole process took valuable time away from the individual who received the ticket, the shift commander who had to issue a second ticket and the court clerk who had to administer the fine.

Under the new system, patterned after a system formerly used in St. Louis, the parking offender will be issued a summons containing a form on which to fill out all of the pertinent information. The ticket will be complete with the amount of the fine and an envelope in which to mail the fine.

An individual who receives a parking ticket can simply affix an 18-cent stamp on the envelope and drop it in the mail. Then, it's over for the offender--that is, unless the check bounces. If the ticket is not paid within a week, a warrant will be issued.

Gerecke pointed out an individual, under the new system, will still have to appear at headquarters if he or she wishes to contest the ticket in order to be given a court date.

In addition to the ticket system, the department has also hired two new civilian "police aides" to issue parking tickets, allowing the two regular patrol officers who had formerly been assigned this duty to be re-assigned to the patrol division.

"This has allowed us to increase the size of the patrol division," Gerecke said. "There are some things within the police department that can be civilianized. This doesn't meet with universal agreement here, but it will enhance the performance of the department."

The changes were among those suggested by the Public Administration Service after that firm completed its study of the police department several months ago. However, Gerecke said the changes were not new ideas in Cape Girardeau.

"I tried to make these changes several times," the police chief said. "But they weren't granted (by the city)."