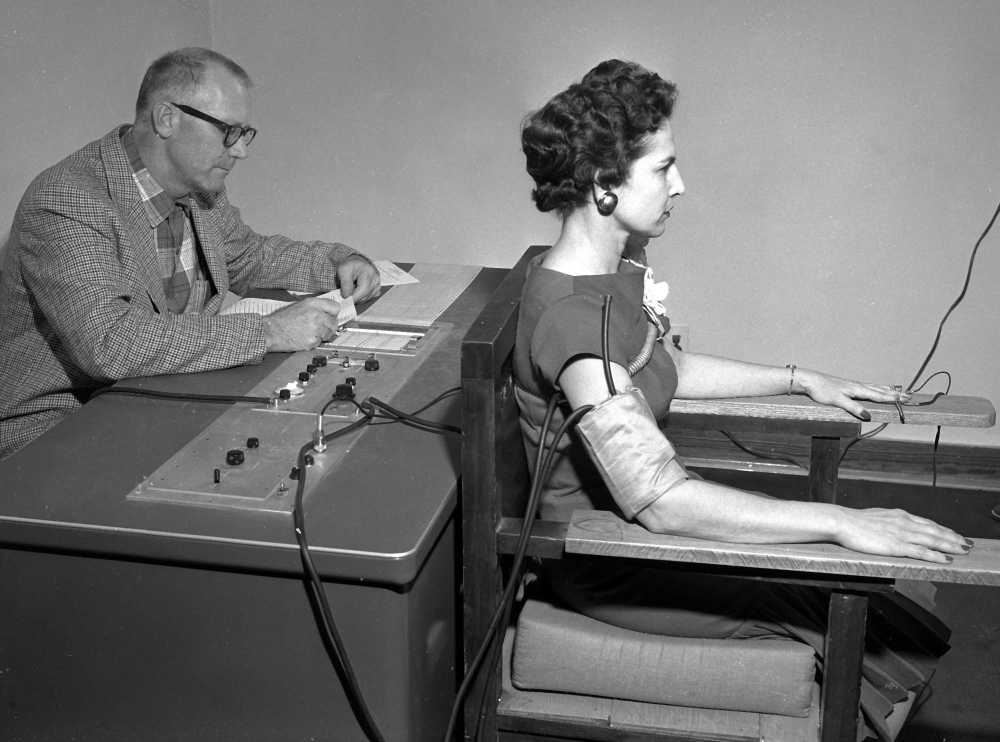 Your heart skips a beat, there's a tightening in your throat, your hands become clammy and you wonder why. This is fantastic, you know. Even if you are going on the polygraph machine, you haven't broken the law (you don't think). And the operator is only going to ask you one question, he said so. Then why this eerie feeling so near to fear?

Could it be that the one question concerns your age and, true to feminine fashion, that's the one thing you don't want to reveal?

Or could it be because all these gadgets strapped to you are so unfamiliar and you have been told they are going to tell "tales" on you?

Of course, the one around your arm, you've seen that before in a doctor's office when he's taking your blood pressure, so that one couldn't mean much. The fact that you must sit quite still in a straight-backed chair, in your opinion a mal-version of the electric chair, not knowing just what's going on behind you doesn't help any.

You are suffering from claustrophobia in this small, tightly-closed room--that's the answer.

These thoughts cross your mind. And then the quiet and soothing voice of the polygraph operator--Sgt. Ralph Eidson of the Missouri State Highway Patrol--comes through to you. Beginning his explanation and instructions, he tells you to answer "no" to everything and that, after reading the recordings, he will attempt to tell you your age.

Ha, you think, people who know me a lot better than he does have tried that. After all, you are one age, attempt to look another and say you are still a third--now who could figure out anything as confusing as that?

So, to help things along, you dig up a determination to get your thoughts on matters other than the one at hand.

Slowly and in a monotone, the sergeant asks, "Are you 30?"

And so down the line. Sometimes, he returns to a number, and sometimes he asks things irrelevant. But whenever, he begins getting close to your secret, you can feel the tightening in your chest and the dampness of your hands. When he does mention the correct figure, your heart beats like a sledge hammer as you stoutly acclaim "no."

Then the sergeant "unstraps" you and gives you a look at the recordings, after backing off about two paces before "quickly spitting out your age." He, too, knows this to be the nearest and dearest secret to a girl's (?) heart.

You gasp because you can't possibly figure out how he obtained the answer, but then a study and more through explanation of the recordings clears up the subject somewhat. For you, too, can see that as the questions being asked came closer to the correct answer the "needles" began to act up. When the question hit upon your true age, it is plain to see the "needles" went completely berserk--a dead give away.

A tip to Jack Benny--pick another number, 39 won't work!

Technically speaking, the polygraph is a machine which registers more than one recording, Sgt. Eidson explained. In the case of this particular machine, there are three recordings.

He added that a regular test consists of a series of questions asked a person and the simultaneous recording by the lie detector of the person's body changes in response to these questions.

The test is based on the fact that physical changes occur in a normal person who lies. The machine does not actually detect lies, but rather, it produces a record (chart) of the physiological by-products of a person's emotional responses during the test. By examining this chart, the examiner may detect a person's attempt to tell a lie and to conceal it.

The subject willingly submits to the test and is examined in a private room. The procedure is like this: The blood pressure cuff is fastened about the upper arm and inflated to a point about midway between the systolic and diastolic pressures so that a continuous tracing of blood pressure-pulse variations are recorded by a stylus (needle) on a moving strip of paper.

A tube (pneumograph) is fastened about the chest for transmitting respiratory changes to the instrument. A pair of electrodes is fastened to the fingers for recording the electrodermal responses.

The success of the polygraph depends a great deal upon the operator, who must first undergo a long period of rigid training before he is considered qualified.

Sgt. Eidson said the machine is not designed to convict everyone, but to eliminate a number of suspects, thus saving time and money of law enforcement agencies when attempting to solve a case.

It is said that the machine will reveal when a person is lying in about 85 percent of the tests. And those attending the open house at the police headquarters over the weekend are believers of this statement. Numerous persons took the brief trial test, but not one was know to "beat" the machine.