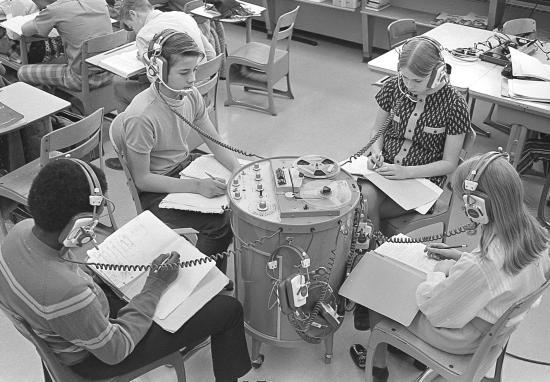 There's a segment of the old country schoolhouse method of teaching going on at Cape Girardeau Junior High School, at least in one teacher's eighth grade English classes.

It's called an individualized English program. Mrs. Frank Adams innovated the unique method of teaching four years ago and now Mrs. Robert Cook, also an eighth grade language arts instructor, is putting it to use.

Mrs. Adams explained the idea behind individualized teaching as, "Each student works at his own rate of speed. He takes as much time in any one area as he needs, within limits of course."

She said she has noted progression in the program over the past four years and plans on continuing the individualized method of teaching.

"A student working at his own rate of speed will accomplish more," she said, "than if you were spoon-feeding him. This way," she continued, "he can also tell his own difficult areas. We try and keep a lot of one on one contact in the classroom," she noted.

Mrs. Adams said she feels the pupils are learning more because they are given more time to spend on difficult segments of their English studies.

For instance, an eighth grader who may have difficulty with certain aspects of grammar, is granted more time to study specific areas where problems have arisen, while the pupil who had comprehended a particular area of study, may go on to another lesson, she said.

Mrs. Adams does not lecture before the class. She uses a portable susette learning center, which enables the pupils to listen to prerecorded lectures when and as often as they feel necessary.

The learning center has proven a successful method of instruction, she said, because some pupils may be listening to a lecture while others are busy at another task, reading, writing or taking tests.

One of the greatest assets the junior high age pupils are gaining, she said, is that they are learning to manage their time.

"They have to learn to manage their time," she explained, "and learn the value of learning." Mrs. Adams said she believes through one to one instruction, they are learning more than if she stood before them and lectured during each class.

One of the biggest difficulties she has found with eighth grade English pupils is that they do not retain what they have learned. "It must be re-enforced each year," she said.

She said she has found her pupils experience the greatest difficulties with grammar and reading.

"It's not poor teaching," she said, "they just tend to forget."

She said getting pupils "to read and follow" instructions is also a main problem. "They tend to become very dependent on teachers," she added.

"And I feel I am a better teacher instructing on the one to one basis than I am standing before a group giving a lecture," she said. 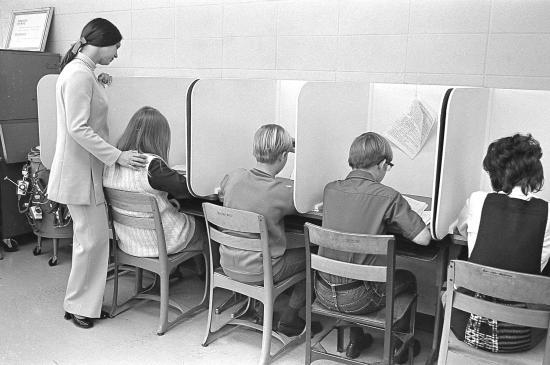