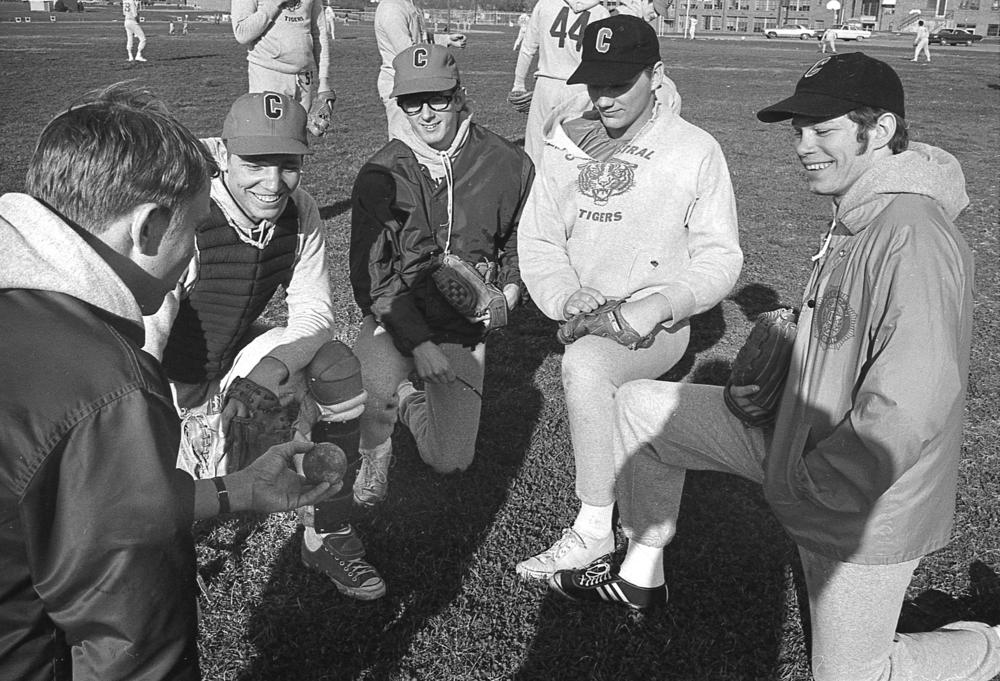 Cape Central baseball coach Dale Meier, left, talks with some of his battery members during a break in a practice session. To Meier's right, in order, are catcher Gene Dewrock and pitchers Burton Bock, Gene Schlick and Mark Hogan. The Bengals open the season March 30 at Jackson. (See another team photo below.)

Remember broken windows, grass-stained pants, a long, long string of yarn, and unexpected rain showers? How about the guy with the scary side-arm or the misplaced ball-snatching patch of weeds?

If you're female, you might not have an idea of what they mean, but they were things most boys lived with every day of their summer lives. They were baseball.

And baseball is back, just about ready to take over from the stuffy gymnasiums. At Cape Central, where there are a couple of new coaches, things have been building up to the Tigers' first game, that a March 30 encounter at Jackson.

Dale Meier, the Tigers' head coach, is not exactly a new coach, having previously assisted Leon Brinkopf, who retired from coaching last year. But it is Coach Meier's first year as boss. Assisting him is a coach new and not new to Central, Paul Kitchen. Coach Kitchen is a former Central ballplayer come back to his alma mater after coaching at Dexter.

The SEMO Conference has some personnel changes this year which could be interesting for the Tigers, who have won the old conference title 15 of the last 16 years under coach Brinkopf. The Conference has added teams from Charleston and Sikeston, which should upgrade somewhat the caliber of play, especially with respect to the Bulldogs, who beat Central last year in sub-state play. The teams from Chaffee and St. Vincent's of Perryville were dropped from the conference.

The Tigers, who won the conference a year ago, return with an infield nucleus of outstanding ballplayers. First baseman Carl Gross and second baseman Tim Kelley were both star performers last year and they are joined by senior Gene Dewrock, who can play either infield or catch. Center fielder Ron Wulfers, who can provide the longball occasionally, is the fourth member of the team mentioned by Coach Meier as "sure starters."

Once past those four, almost all the other positions are fairly competitive. A prime candidate for an infield void is senior Bill Wilkening, a letterman, who is getting competition from juniors Troy Vieth, Ken Hosea and Greg Best.

Ready to catch in case Dewrock is needed in the infield are three juniors, Mark Landgraf, Steve Schlick and Mike Dunaway, all capable but inexperienced on the varsity level.

In the outfield, seniors Malcolm Montgomery and David Dow are ready to take over a post, but the jobs are far from settled with juniors Jim Limbaugh, Tom Stahly and Mike Uhls also competing. Uhls should be able to fill in for Gross at first base also.

Also mentioned as possible help to the Tigers this year were sophomores Blane Nagel and Steve Volkerding, who obtained good experience last summer playing American Legion ball, may be used in the outfield.

On the mound, the Tigers could be strong. Senior Mark Hogan returns as possibly the ace of the staff. The lefty pitched regularly last season, winning the Tigers' last game of the season by no-hitting Perryville. Joining Hogan in what Coach Meier called his probable starting rotation were juniors Gene Schlick, a fireballing right-hander, and Randy Johnson, a southpaw along the lines of Hogan. Both are varsity experienced.

If anyone falters the Tigers have experience in righties Burton Bock, expected to be used mainly in short relief, and Danny Eaker, a long relief man and spot starter. Also on hand is junior Bob Garner, a lefty not on the squad before, who could see some relief work.

"It's a pleasant problem to have," says Coach Meier of his almost position-by-position depth. "We could be competitive."

With Sikeston and Charleston blocking the road, the Tigers may have to be. 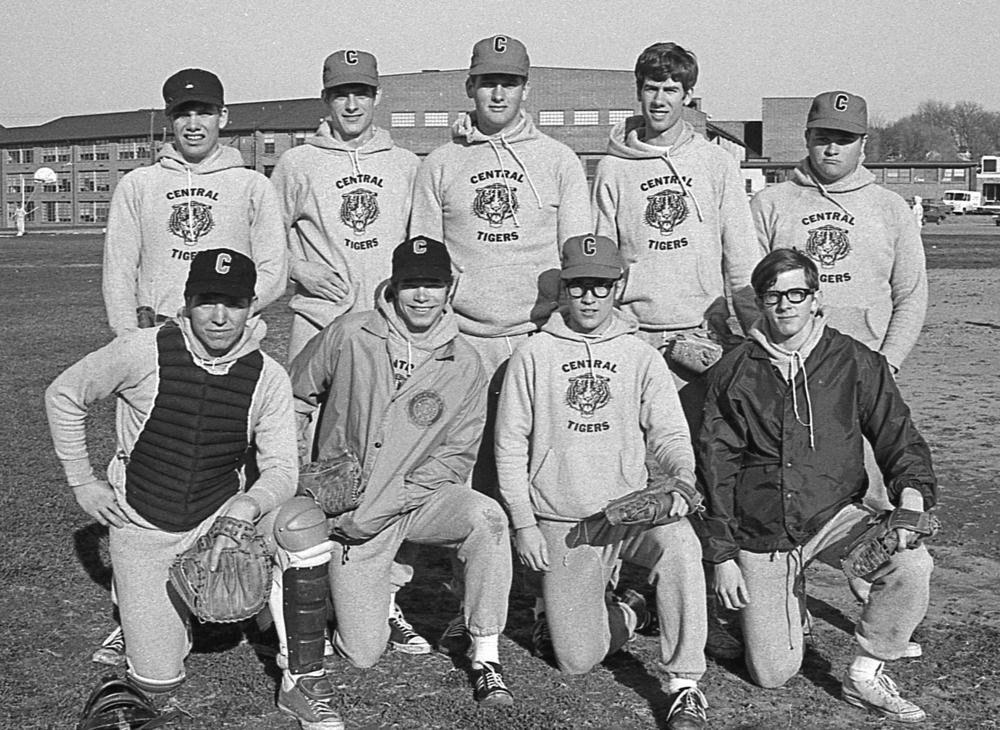