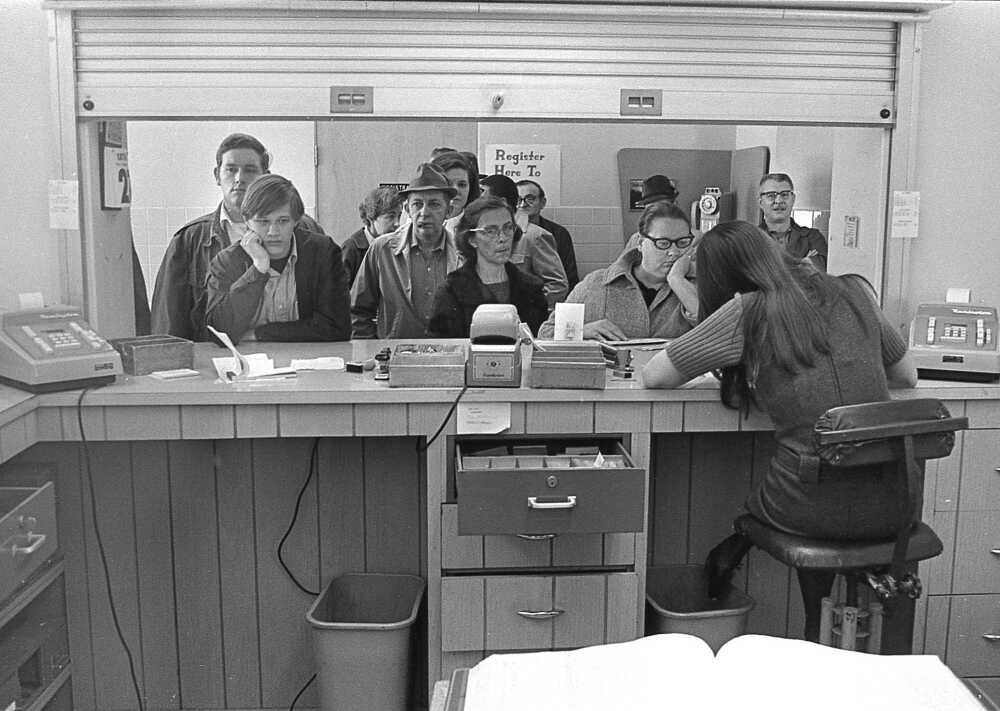 With city vehicle licenses becoming delinquent at noon Saturday, vehicle owners lined up outside the city collector's office in Common Pleas Courthouse that morning to purchase their stickers. Today, a penalty was added for late buyers. Selling the licenses is Miss Linda Ford, who works in the collector's office.

To check on those not displaying city stickers

A concerted effort is to be begun to arrest all persons who live in Cape Girardeau and operate their motor car vehicle without a city license, Police Commissioner Leon McLaughlin said today. The licenses were due at the first of the year and were delinquent after Feb. 15, he said.

The commissioner pointed out that the ordinance states that a person may be arrested for operating a motor vehicle without a city license and that it is a violation not to have such a license displayed in the lower right hand corner of the windshield.

Records are available on all who have purchased the city license and officers may check them in enforcing the ordinance, Mr. McLaughlin said.

The figures are comparable to those of a year ago when by March 15--the deadline then--car, truck and motorcycle sticker sales were 8,453, 1,384 and 143 respectively.

The rush to buy the licenses was evident Monday and Tuesday and continued until the 4:30 closing time on the last day.

A $1 penalty went into effect today.

Girardeans can scrape city license stickers off vehicle windshields and forget about standing in line late next February to buy the tags. Cape Girardeau's City Council has abolished them.

Starting the move was an appropriate means of giving further tax relief. The council in a surprise move unanimously voted Wednesday to eliminate the tax. It brought about $90,000 annually into the city treasury.

Mayor Howard C. Tooke said after the meeting elimination of the tax had been informally discussed for some time without full agreement by councilmen on whether to take the step.

He said the question was broached again after the public portion of Tuesday's study session. An agreement to act was not reached then, he said, but there was a general accord that eliminating the tax would not seriously affect the city's financial position.

Mayor Tooke said he viewed the tax largely as a nuisance. He said it necessitated extra work in administration and usually resulted in long lines at the last minute to buy stickers.

"I for one would be glad to see the tax abolished," the mayor stated. "I would prefer to see the elimination of this rather than a reduction in the property tax."

Explaining that afterward, the mayor said that if statewide reassessment should come, the city might find itself in a pinch if locked by law into a lower tax rate for the general fund.

Mr. Stehr, in explaining the impact of the change, pointed out it was comparable to a 14-cent reduction in the property tax rate.

"I think it is just a fair way to cut the tax rate without getting the property tax dangerously low," Mr. Stehr said.

"It always takes me three trips," noted Councilman Samuel L. Gill. He said that it takes property tax receipts, sewer receipts and the vehicle registration to obtain the sticker.

An ordinance amending city ordinances was read. It is effective in 10 days.

The abolition of the city license tag will end a city tax that dates to 1916 when the city government first required stickers for all vehicles, including wagons. The license requirement had continued uninterrupted since that time.