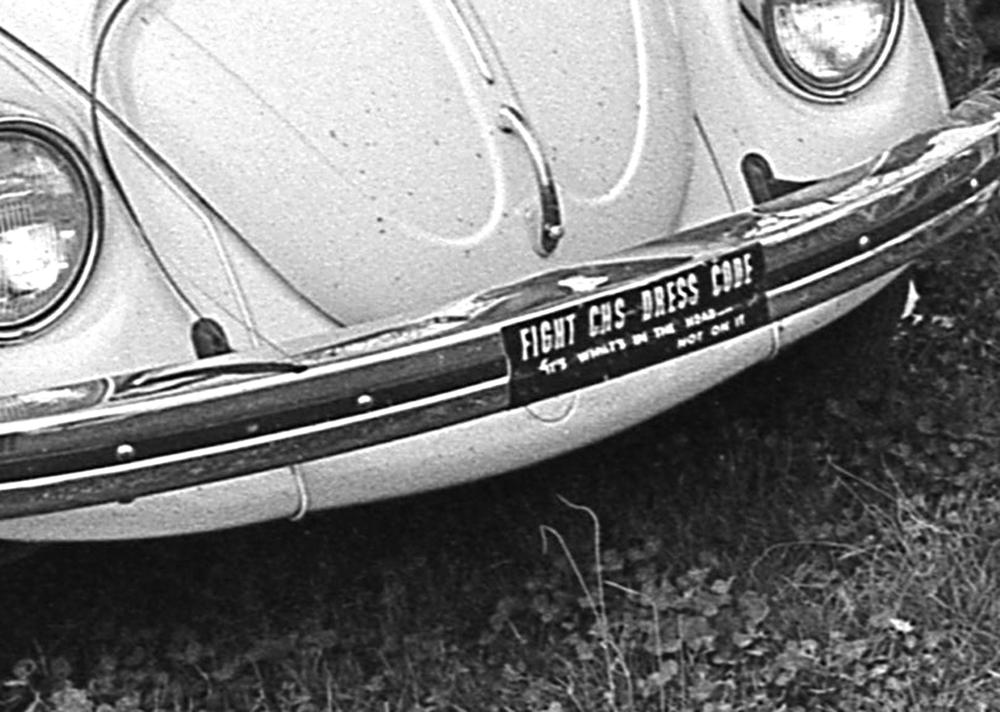 A "mouse" on wheels

Dress code to remain in force

The dress code for pupils in Cape Girardeau Public Schools will remain as it is until the end of the school year.

This decision came automatically Monday night at a Board of Education meeting after a motion to modify the dress guidelines failed for lack of a second and another to entirely discontinue the code was voted down three to two....

The motions followed a period of discussion after Supt. Charles E. House reported on a parent survey which showed a predominate percentage responding--42.7 per cent--favor the present dress code.

Second largest group--34.3 per cent--indicated they want dress guidelines but with some modification.

"Combining those voting in these two choices clearly shows a majority--77 per cent of the parents--do favor a dress code," Mr. House said.

Only one of six prospective Cape Girardeau School Board members is demanding abolishment of the Central High School dress code, it was learned during lengthy questioning of the candidates by the parent-teacher unit of the school Wednesday night.

The other five--including incumbents Jack O. Kramer and Hilary F. Schmittzehe--are walking gingerly along the controversial issue, although all are calling for some changes in updating or correcting what they view as fallacies in the present written code.

"I am strongly opposed to the dress code," John W. Martin, regional manager for a Cape Girardeau credit service corporation, replied to a question from the audience directed to all board members.

"It seems to me that the dress code is going beyond the school board's right to tell kids how to dress. Teachers and administrators are spending more time measuring hairlines and hemlines than they are the Mason-Dixon Line," he asserted.

Although the dress code took up a major portion of the two-hour parent-teacher meeting, questions concerning several other educational issues were also fired at the six candidates following five-minute platform addresses from each.

Mrs. George A. Ketcham, a volunteer teacher's aide in the Cape Girardeau school system; Max G. Stovall, construction contractor and former city commissioner, and Dr. C. John Ritter, internist with the Internal Medicine Group here, are the other three candidates in the field of six.

Mr. Kramer said he strongly favors the dress code but admitted "there are inequities." Explaining that since he is president of the board, he was unable to vote on the issue when it arose some months ago. He called for "making some changes next year, but not completely relaxing its contents."

Mr. Schmittzehe agreed. "By reversing our thoughts now," he said, "it would become a matter of backing off the line to students and parents."

Mrs. Ketcham called for a modification of the code. "It is in need of modification, but not a complete revision each time the fashions change." She said there "should be a reasonable approach to dressing at school...there shouldn't be a line drawn."

Mr. Stovall told the gathering of approximately 100 teachers, parents and pupils that he basically supports the dress code. He said, however, he believes the administration should "keep in tune with the times."

Dr. Ritter, who has been practicing medicine in Cape Girardeau two years, expressed support of the dress code but attacked the "written code." He said "The written code is putting it on the line. It is hard to deal with it once it is put on the line." He noted that problems arise because of the fact that the dress code is written, "But how is it enforced?"

A question of whether corporal punishment should be used in the school system was also examined extensively.

The question followed another inquiry about the dress code from Kenneth Richards, a senior at Central, who called upon Mr. Schmittzehe to explain why the dress code remained in effect while a poll had shown an overwhelming majority of pupils at Central wanted abolishment or changes in the present code.

Mr. Schmittzehe said a large number of students did not go along with abolishment of the dress code. He said "Students at the age of 17 or 18 don't have the expertise to decide for themselves what's good for them."

On corporal punishment, Mr. Kramer said he is in favor of it. Mr. Schmittzehe said it is "justified under certain circumstances. Mrs. Ketcham said it is "not as good a measure as others" and discourages the use of it. Mr. Stovall agreed it should "be kept on the books," but added it should be used in the presence of the pupil's parents and Mr. Ritter said he would like for it to be "kept around as a last resort."

Mr. Martin said he was opposed to corporal punishment and demanded "equal time" to answer the question from young Richards, directed at the incumbent.

"No one has yet told me what connection there is with a hairline and how a kid does his schoolwork," he said.

The main business transacted by the Student Council last week was voting on a tentative dress code policy for next year. The following statement was passed, sent to Mr. Sifford, and will go to the school board on his approval:

The dress code committee of the Central High Student Council believes that it is the parents' right and responsibility to govern their child's dress and appearance at school. The committee therefore recommends to the Board of Education that they adopt a "no dress code" policy on a trial basis for the first semester of the 1971-72 school year. The Board will need to control student dress to some extent for certain health and safety measures. We feel that the following measures are reasonable and should be accepted.

Some form of footwear with a sole.

Swim suits and pajamas are unacceptable.

Some type of shirt or blouse.

Hair and body must be clean.