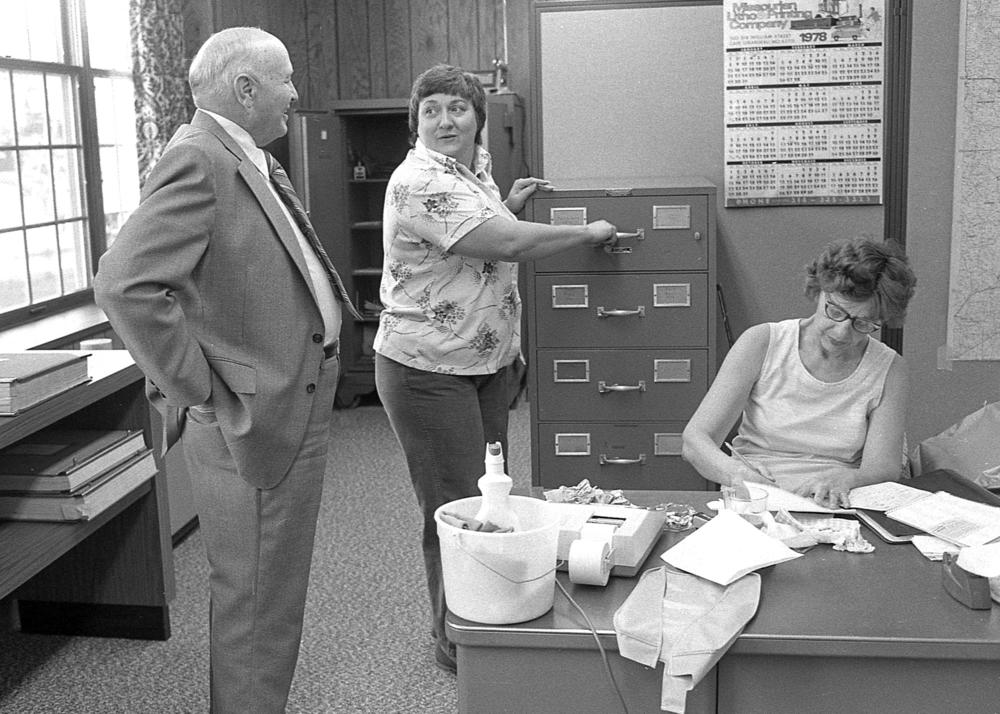 City Councilman Howard C. Tooke listens to deputy collector Clara Morrison's explanation of why she sent for a locksmith to open her tax record file cabinet. The cabinet was locked at Common Pleas Courthouse before the move to City Hall to keep drawers from opening, but at the new office even the proper key would not open the stubborn cabinet. Wilda Rudert, seated, deputy collector, celebrated her birthday on Friday, moving day. 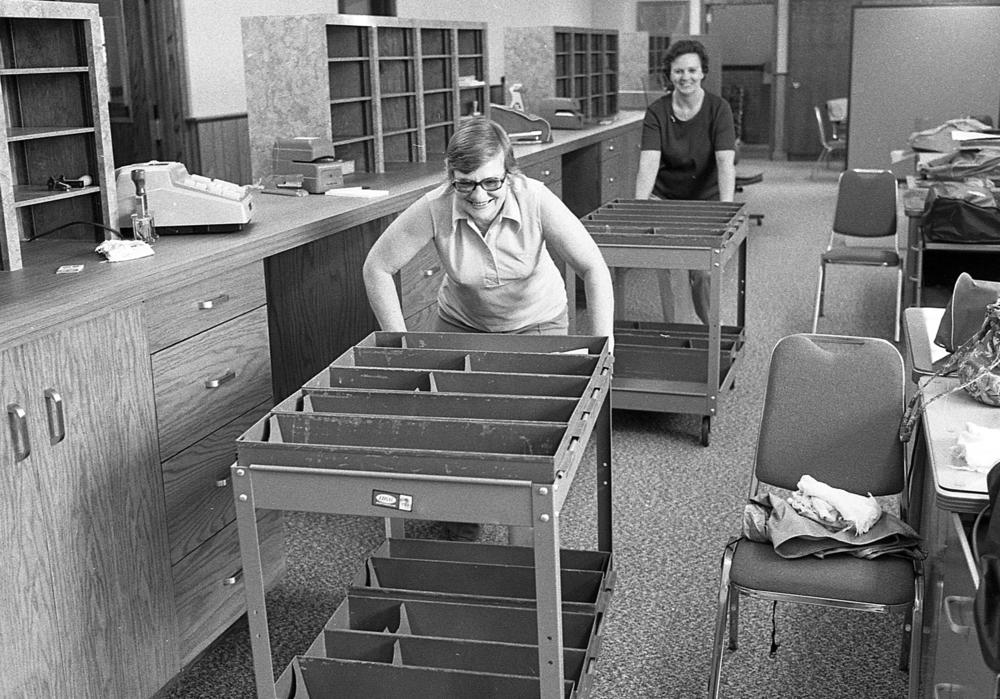 It was all hands on deck for the City Hall move. Here, Imogene Yallaly, foreground, sewer tax collector, and Betty Campbell of the collector's office help move furnishings. Moving began last weekend and was finished by Friday. City Manager W.G. Lawley said an open house to show the new city quarters will be held later this fall. (Fred Lynch photos) 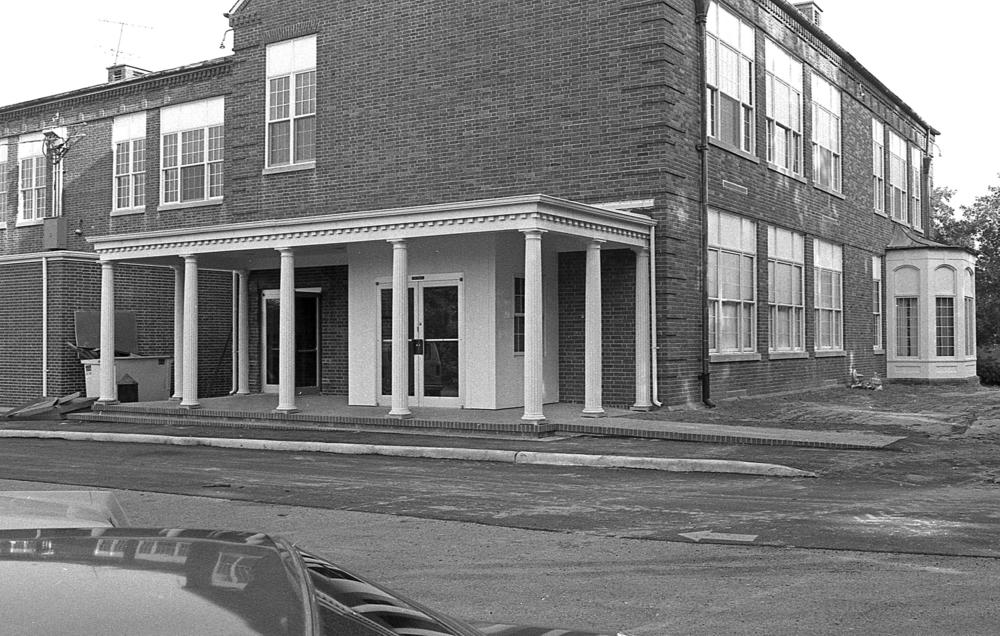 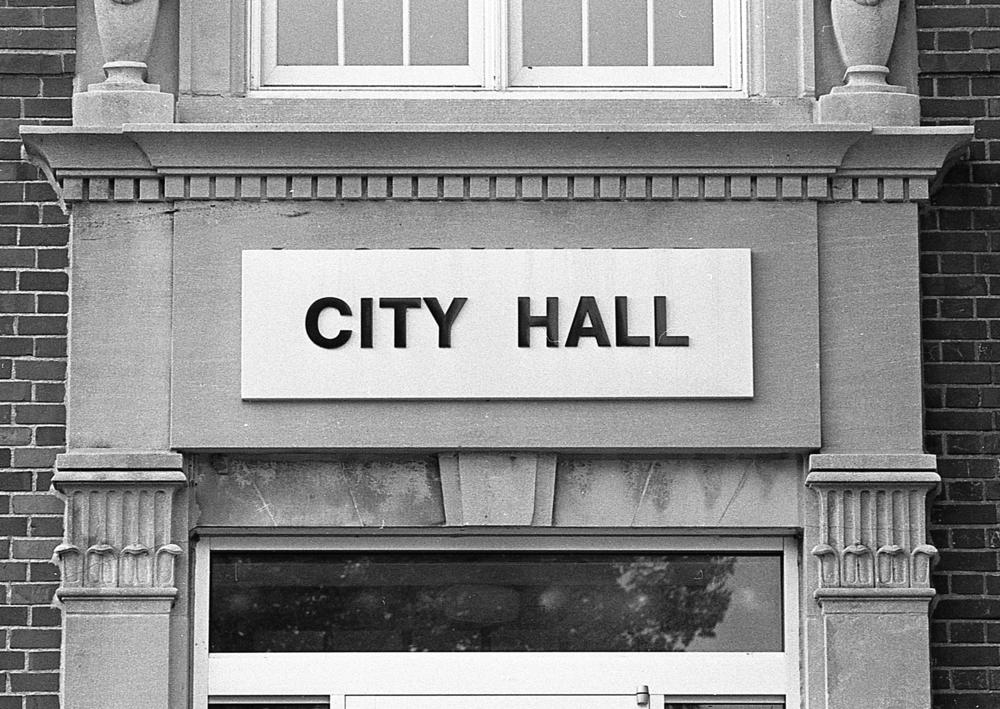 City 'settles in' to new quarters

Cardboard boxes are scattered everywhere and there's not a blackboard to be found. Newly-installed telephones sit on the floor awaiting a more permanent location while workmen and city and county staffers work to create order among the chaos.

But as of Friday, city and county offices were completely moved out of the Common Pleas Courthouse to their new location in old Lorimier School.

Those who remember Lorimier School as it was are likely to get a surprise when they view the new City Hall. The memories are still there but it is a very different place.

The past is an integral part of the building from the colorful fairytale mosaics framing the water fountains to the wooden cabinets in the engineering department and the City Manager's office. But now it is a building of the present, complete with wood-paneled walls, carpeting and lots of space.

"The man who first mentioned this as a City Hall will be very pleased," said W.G. Lawley, city manager. "This is the kind of project that administrators get to glow about. It just makes you feel good." An open house at the new City Hall will be held later this fall.

The ground floor is occupied by City Council chambers, the City Manager's office, the assessor, sewer tax collector, county collector, city collector and registrar, plus the gymnasium and stage. On the second floor is the city attorney, health department and staff rooms. In the basement where the cafeteria once was will be a community room and kitchen.

"We made use of every little thing we possibly could," said Mrs. Cecelia Sonderman, administrative assistant to the city manager. "We tried to blend the old with the new."

The renovations have been a time-consuming task. Walls had to be torn out in some places while other walls had to be built. All the office walls are wood-paneled and much of the building is carpeted.

A new foyer and portico are the entrance to the attractive new City Council chambers, and there are new windows, new doors and new furniture.

Bright orange padded chairs fill the council chambers for spectators at council meetings. Council members will sit around a semicircular wooden table in large, comfortable chairs. The chamber has its own sound system complete with jacks for media representatives to plug equipment into.

In the city manager's office, adjoining the council chambers, there will be, for the first time, a waiting area for persons who want to see Mr. Lawley. The room where council study sessions are expected to be held features a mock fireplace with large wooden benches on either side.

In the collector's offices, a vault had to be built. "All the vault files are new," Mrs. Sonderman said. "We wanted metal ones--the old ones were wood." The old wooden files would have been more than a little trouble to move because they were nailed to the wall, but Mrs. Sonderman said the city preferred metal files anyway. "We've taken every precaution to make this as fireproof as possible," she said.

On the completely-carpeted second floor, a double glass door leads to the engineering department offices where the code inspectors now have rooms of their own, and there is a conference room for contractors.

The city attorney's office is soundproofed and in the adjoining room, with his secretary, will be the First Offender's Program. The second floor also has an employee lounge, machine room and lots of room to expand if that should ever be necessary, Mrs. Sonderman said.

As in every move, especially one involving so much material, there have been problems. The actual move had originally been scheduled for the weekend, but a mix-up with the movers forced the process to begin Wednesday, Mrs. Sonderman said.

Minor problems encountered included drapes that didn't fit and curtain rods installed wrong. Some of the drapes were too long and had to be altered. Mrs. Sonderman said that showerheads in the bathrooms adjoining the community room had been stolen and would have to be replaced. The stage curtain has been taken down to be cleaned and another curtain separating the community room and kitchen has yet to be installed.

But the little hassles will probably soon be forgotten once the move is complete. The list of advantages to the new building is long and varied. Mrs. Sonderman said taxpayers will now be able to come inside the sewer tax office instead of being forced to wait in the hall. Storage space for all the offices in the building is abundant. And chances are, parking space will be easy to find thanks to the 92-space parking lot.

"This is an example of what can be done with older serviceable buildings in the community--a well-built building continuing to be utilized," Mr. Lawley said. "And it was acquired at a cost of just under $500,000 or roughly $25 per square foot. Compare that to any other building and it's very economical."

Mrs. Sonderman said the city offices had been in the Common Pleas Courthouse since the town was incorporated. Lorimier School opened its doors in 1937.

Mr. Lawley is lavish in his praise for those connected with the move, including architect Tom Holshouser, Mrs. Sonderman, the carpenters and city employees. "They have really done a fine job," he said. "The City Hall staff has worked hard and shown a lot of initiative. They really pitched in."

There was, however, a sentimental note to be added for the Common Pleas Courthouse. "I'm going to miss Courthouse Park and looking out at the river," Mr. Lawley said. "But this is pleasant, more functional and attractive. I think the citizens will find it a pleasant place to conduct business."