Flooding at Kingshighway and Bloomfield Road 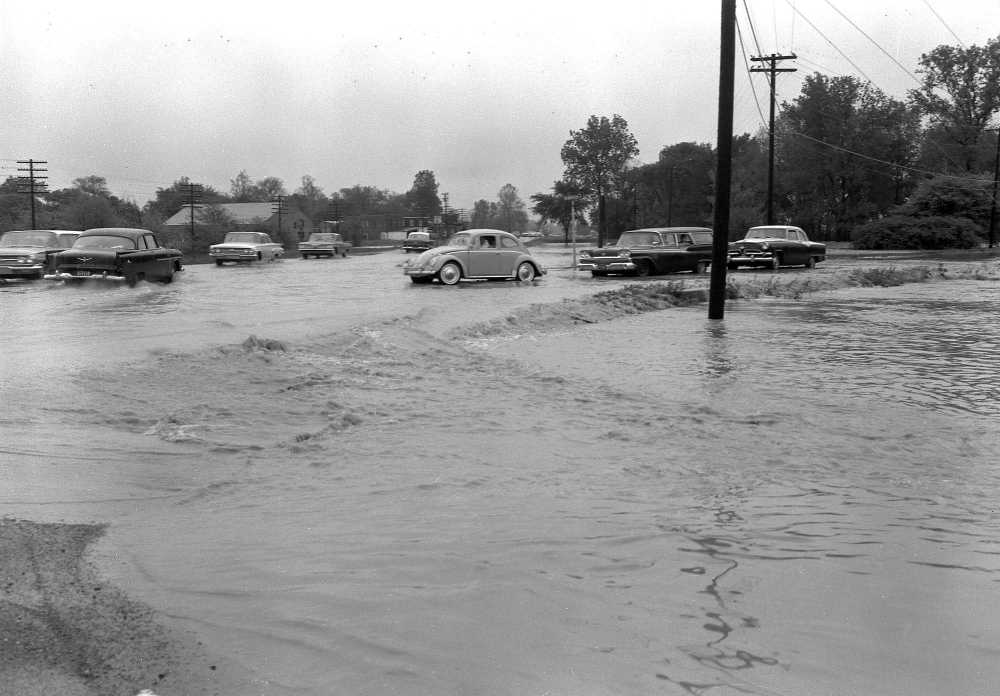 As in the past, Cape LaCroix Creek couldn't carry all the water during the heavy, continuous rain this weekend. This picture was made Sunday morning after Saturday night's downpour, showing water over the intersection of Highway 61 and Bloomfield Road. The view is looking to the north from Kingshighway with Bloomfield Road at the right. (G.D. Fronabarger photo)

Parades of thunderstorms and threatening masses of clouds rolled across Cape Girardeau skies in turbulent masses over the weekend, releasing 2.63 inches of rain which sent streams raging out of their banks.

The rainfall on Saturday and Sunday was added to 2.95 inches which fell on Friday night and brought the three-day total in the city to 5.58 inches.

Cape LaCroix Creek (Three Mile Creek) roared out of its banks under the continuing parade of thunderstorms and downpour after downpour.

As it rose, the threat of a washout occurred at the temporary bridge on Highway 61 and at 3:30 a.m. Sunday the first of some 30 Auxiliary Policemen were called out. The bridge was closed as the rising waters continued to push against it, weakening its temporary underpinnings and lodging huge piles of debris against them.

Traffic was diverted around the bridge for a time, but later the new span, itself completed, but its last coverings of asphalt still not in place, was opened. Traffic used it on Sunday.

Further downstream, where Cape LaCroix meanders through the western part of the city, it did not reach its crest until about 9 a.m., spilling out over the lowlands along Highway 61 and threatening to inundate several businesses. Floors of a few were put underwater.

The Gordonville Road intersection was covered, and traffic, if it moved at all, went slowly. The water was just a few inches from the floor of the bridge on Gordonville Road and overflowed into the low areas along Broadview to the west of Highway 61.

Walker Creek filled its banks and was held back by the rush of water at the point where it enters Cape LaCroix. In some instances the water missed getting into business places by mere inches.

Golladay Addition residents, who had closely watched the water, escaped without flooding in houses, although the water from the Walker Creek watershed did flow over yards.

Residents there had contended the old bridge on Kingsway Drive held water back and caused the creek to back up, entering their houses. Since the floods of two summers ago, a new bridge has replaced the old structure. Since the area did escape flooding many believe its larger size prevented overflow.

There were the usual reports of overflowing on streets at the customary trouble spots--Pacific and Middle, Pacific and Independence, West Broadway and elsewhere.

Many residences over the city also had water in their basements from a variety of causes.

The lagoon in Capaha Park, which receives water from a wide area to the north, overflowed and ran deep water over its west bank. Many persons took buckets and nets and caught fish which washed out with the overflow.