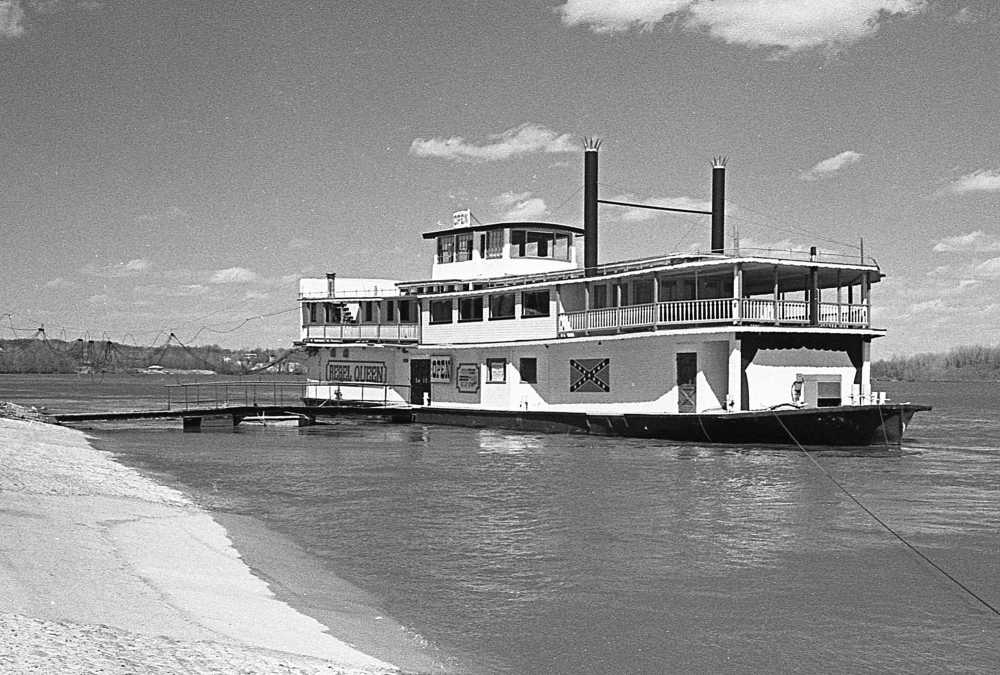 The Rebel Queen is seen at the Cape Girardeau riverfront in 1971.

One of Cape Girardeau's newest businesses is afloat! The Rebel Queen, a riverboat docked at the foot of Broadway on the Mississippi River levee, will be opened soon.

The boat features a dining area on the upper deck, restored as close as possible to its original form. Sitting in the antique white and red decorated room one gets the feeling of reliving the bygone era of the steamboat. The dining room windows overlook the Mississippi and a veranda is on the stern.

In addition to the dining room-restaurant on the upper deck, the lower deck will serve as the entertainment section with a sing-along Dixieland band, food and drinks. At present, however, it is being rented for private parties.

The Rebel Queen is owned by Robert Toupal of Ordill, Illinois, and is operated by Richard "Tex" Bruns.

The Rebel Queen was built in 1916 for the Mayo Brothers Clinic, and used as a palatial river yacht and sometime floating clinic. Originally it was known as the Minnesota.

The Minnesota was traded for the North Star, which might stir the memories of some Cape Girardeau residents. The North Star passed Cape often and sometimes docked here.

In 1928, the Minnesota was purchased by the U.S. Engineers Corps and used on the Ohio River as a buoy boat. At this time, it was renamed the General Allen.

In 1940, the riverboat was sold to a company in Memphis, Tenn., and stripped of most of its boilers to be used as a wharf boat. It stayed in Memphis until 1966, when Mr. Toupal purchased it.

Three months was spent in overhauling the exterior of the riverboat. All remaining boilers and scrap metal was disposed of, leaving only an enormous shell.

The Rebel Queen, as it was then known, was docked at the Poplar Street Bridge in St. Louis, and with the help of Mr. Toupal's friends, the interior began to take shape.

Cape Girardeau was chosen as the Rebel Queen's home port, and the last lap of construction began on the upper deck.

Moored on the levee, foot of Broadway--Cape Girardeau, Mo.

Serving Sandwiches and Your Favorite Drinks

Until 1:30 every evening except Sunday and Monday

Maybe, longing for more pleasant days when she sallied forth to cruise secluded river bayous on warm summer nights, the old Cotton Blossom just gave up.

The twin-stacked, 70-year-old paddlewheeler that was moored here from 1968 until late 1971, was wallowing deep in the Big Muddy today at her newest port, St. Louis.

The Cotton Blossom, known as the Rebel Queen while operating as a floating restaurant here, is now a two-time loser.

Twice it has sunk in the Mississippi River along the St. Louis waterfront. The first time was in 1966, shortly after it arrived in that city.

Repaired, the boat was brought here in 1968 by the Minnesota Riverboat Corp. of St. Louis.

The vessel originally was called the Minnesota--hardly one of those romantic river names--and was built for the private use of the Mayo brothers of the widely-known Mayo Clinic.

About $75,000 was spent on restoration and remodeling of the boat after it first sank. It was anchored at the foot of Broadway, and was operated here by Richard Bruns.

The boat was returned to St. Louis in early 1972--almost to the exact spot where she sank the first time--and renamed Cotton Blossom. It survived the flood of 1973, and was operated as a vaudeville night club and restaurant.

But on Wednesday, even though a large sign on the pilot house said "open," it was obvious the Cotton Blossom resembled a sodden water lily more than a floating nightspot.

Today, the boat was partially submerged in about 10 feet of ice-choked water.

Officials said they believe a failure of the hull or a hull fitting caused the accident. There was no evidence that the boat had been hit.

Jere J. Wulmering, the most recent in a long line of owners, says the boat will be repaired and opened--hopefully by St. Patrick's Day. Salvage work on the vessel was expected to begin immediately, before the ship fills with Mississippi mud--good for rich farmland but not so hot for plush boats--and sand.

Like many of the owners before him, Mr. Wilmering said he has a true fondness for the old, if not a bit cantankerous, paddlewheeler.

Seeing his pride and joy listing heavily on the waves, Mr. Wilmering sighed that "I'm too big to cry, and it hurts too much not to."