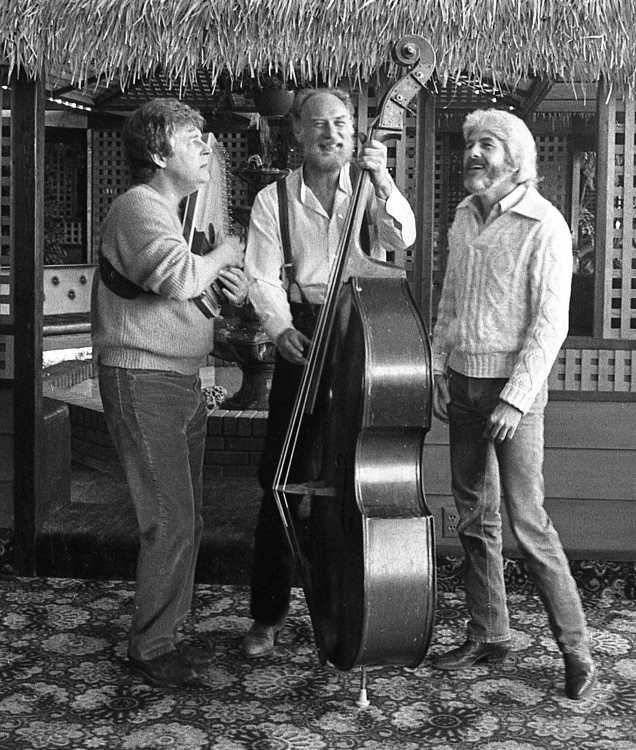 Wiethop, Long and Hendrix, formerly known as the Memorial String Band, take their musical variety act throughout the Midwest as they entertain at county fairs and other functions. Dan Wiethop, left, strums a 36-string autoharp, while his musical accomplices, Bear Long on the bass, and Doyle Hendrix, who plays the harmonica, sing along.

They could be called musical daredevils. When the stage lights go on and the audience awaits them, Wiethop, Long and Hendrix are ready. They say that like a motorcycle daredevil jumping off a cliff, they too feel the rush of adrenalin that compels such a feat.

Their feats are regular live performances, entertaining audiences with their off-beat brand of country humor and down home music.

For five years, Wiethop and Long were better know in Cape Girardeau as the Memorial String Band. Then they added Doyle Hendrix, a harmonica player to the act, and decided to change their name. "The new name gets rid of all those preconceptions people have, and they come in with an open mind," Dan Wiethop said.

What the three musicians have in store for those that come to see their act is a variety of musical material accented with country humor. They compare themselves to the Smothers Brothers, and they spice up their act with bits and pieces of comedy interspersed between musical selections that range in style from spiritual, to classical to near bawdy.

"You can't drive people hard for laughs for a whole hour," Bear Long said. "We play things you don't get to hear on the Top 40. If we do play Top 40, it's probably from 50 years ago. We do the William Tell Overture and Floyd Cramer's 'Last Date.' But mostly we do funny stuff, entertaining, Smothers Brothers type material."

Long acts as the master of ceremonies and is usually the one responsible for instigating the bits of humor between songs. He is also responsible for the bass, an old upright bass purchased many years ago. Taped to the side of the huge instrument is a sheet of paper that lists their repertoire of songs by category.

"I improvised and changed it, made a hot-rod out of it. It's kind of like a golfer might sand down his putter," Long said of his instrument.

Wiethop's instrument is an autoharp. With 36 strings, he says he chose the instrument 12 years ago because of the "sound and potential that it has. I also play guitar."

Hendrix, the seemingly most restrained of the trio, plays what he calls "a simple 10-note harmonica." His father was also a harmonica player and he passed the knowledge down to his son.

Their instruments produce pure and simple unamplified music. They do use an amplification system for their voices though.

The Cape area natives have been taking their show on the road for some time now, but still manage to give occasional concerts around town. Last weekend they acted as goodwill ambassadors for the community by greeting two tour buses at the Holiday Inn with their act. "We're trying to roll out the red carpet for them. The Holiday Inn is providing punch for them and the Chamber of Commerce has some information for them, to make them want to stay in Cape Girardeau and see the town. We used to get up in the buses and perform for them. But this time there are two buses, so we'll be bringing them inside," Wiethop said.

"Sometimes we'll even crowd two or three jobs into one day," Wiethop said of their busy schedule. "And you can get physically worn out. But as soon as I get out on stage that adrenalin starts pumping away."

Wiethop said that recently the group auditioned for the Illinois and Missouri County Fair Association. They auditioned right along with Porter Wagoner, Billy Walker and the Blackwood Brothers.

"Indoors in a concert hall is much nicer and it's much easier to hold the audience's attention," said Wiethop. "At the fairs you have the breezes blowing across the cattle stalls and people are all wandering around."

But the fairs pay well and on the whole, Long says that playing them is a "real pleasure." They reported that stars like Wagoner may demand as much as $12,000 for fair performances. "There's big dollars once you get to that level," Long said. "But some of your smaller fairs, they can't get Charlie Pride or Porter Wagoner."

So Wiethop, Long and Hendrix travel the circuit and play the small fairs.

"Word of mouth is what moves us around," Wiethop said. And playing for fairs such as the Azalea Fair in Fredericktown, the Riverfest in Cape and even the Veiled Prophet Fair in St. Louis helps the band achieve that goal of letting people know who they are and what they do.

"I went to college for one semester," Long said, "and my major was music. This is a career for me. It's something that I need and feel like I must pursue."

"At this time, it has to be a hobby for me," said Wiethop, who also sells cars and trucks. "I would like it if I could make it a career and still live in the means I have become accustomed to. But I enjoy my other job too."

The newest member of the group, Doyle Hendrix, says that the band job is definitely a career as far as he is concerned.

In the near future they plan to continue playing fairs and concerts. They'll be humoring audiences in Cape on April 18. And they plan to continue recording their act on tapes and albums they sell at their appearances. As for future plans and aspirations, they say that becoming members of the Grand Ole Opry would suit them fine.