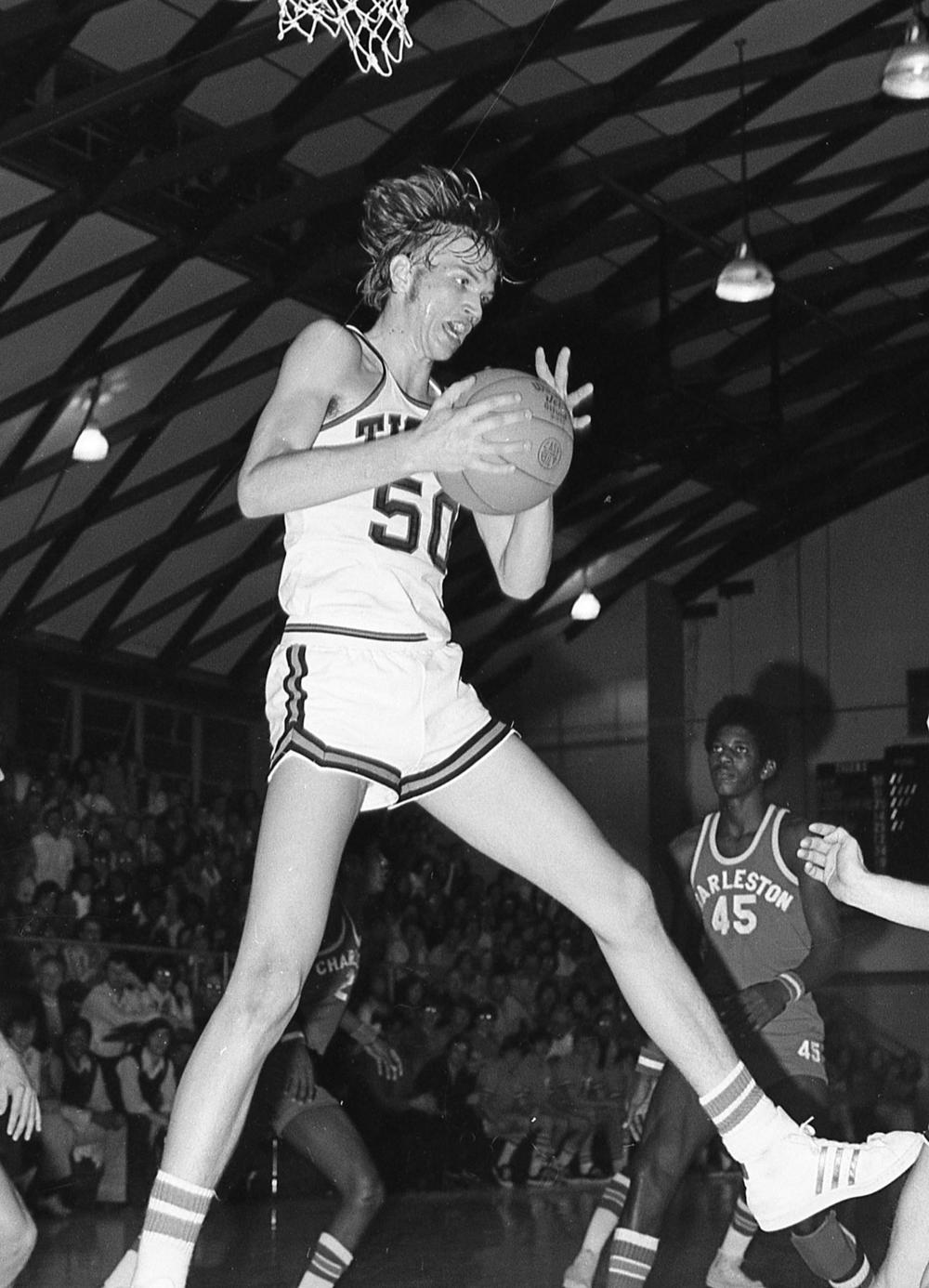 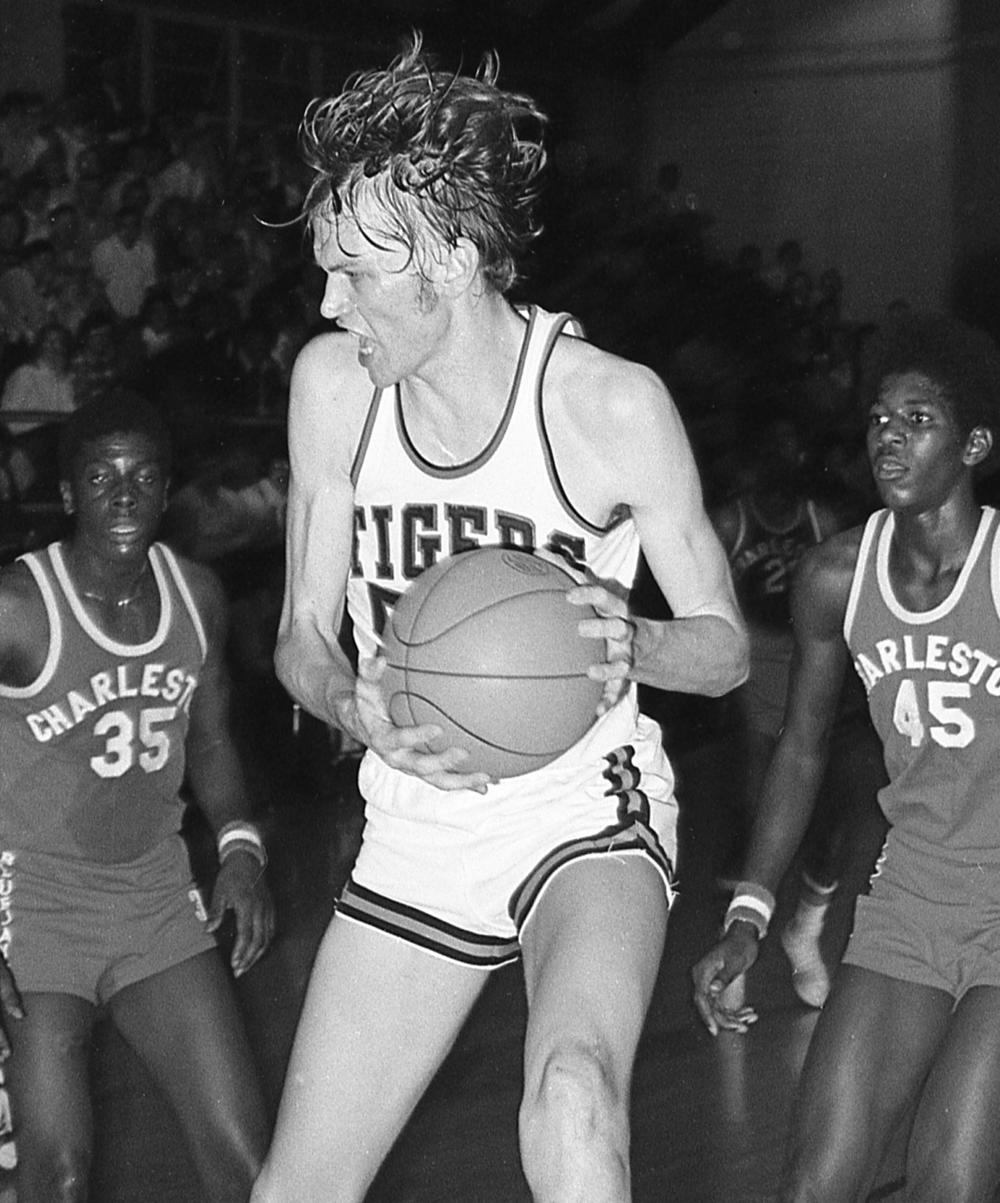 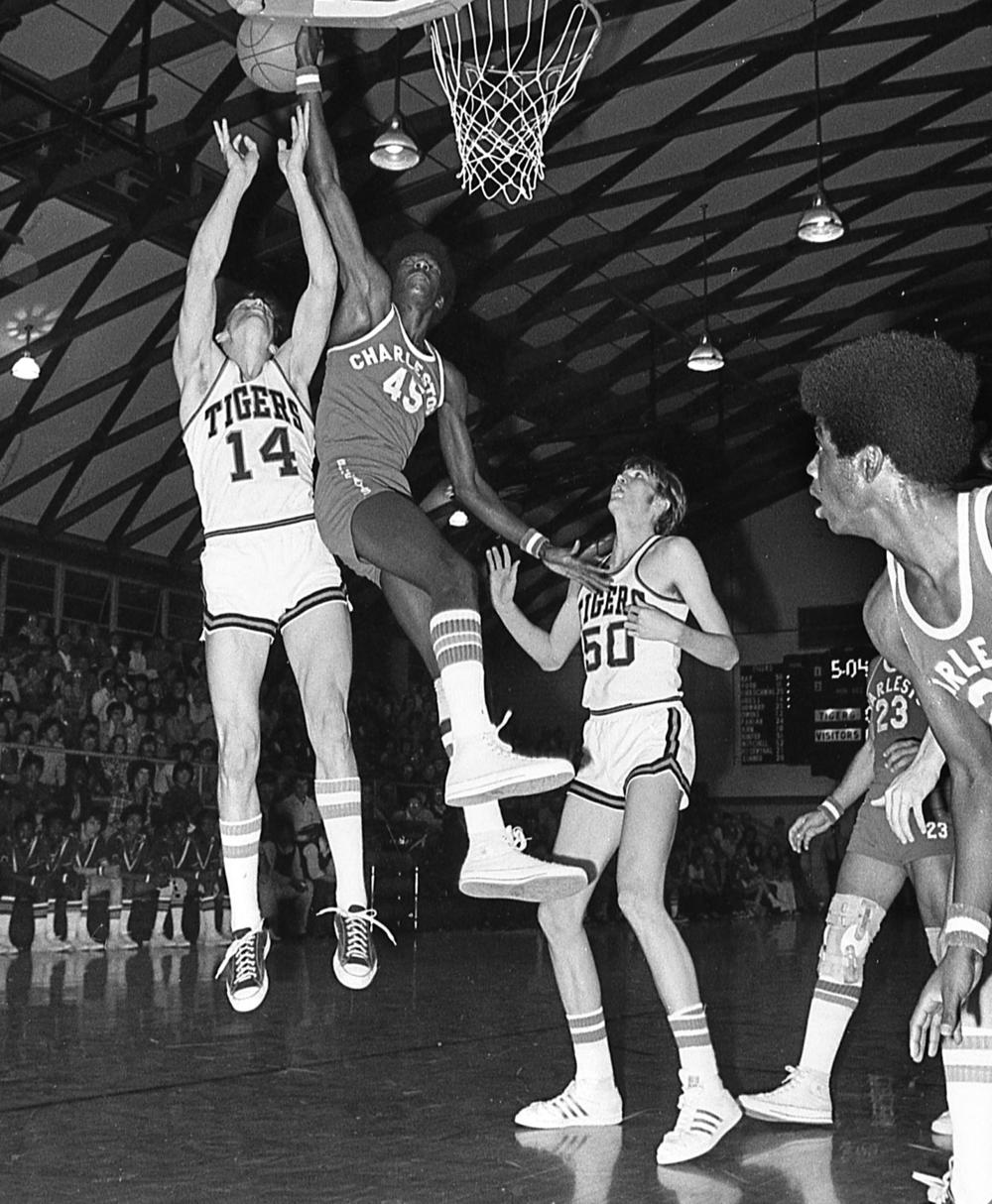 FARMINGTON--Stan Ray--they call him "Stretch"--is listed in all the major college magazines as one of the country's top 100 prep players.

And, those fans in attendance at the championship game of the Farmington Invitational Tournament Friday night won't argue the fact.

All the elongated, 6-foot, almost 10-inch, senior did was score 36 points and grab 22 rebounds to lead the Cape Central Tigers to a 64-46 victory over last year's defending champion, Potosi.

Ray was the big show as the Bengals won their second game in as many starts. His total points and rebounds represented more than half of the Bengals' totals in both departments, and hiked his respective totals to 57 and 36 in the tournament.

Reid won the scoring duel, but Ray and his Bengals won the game, 75-61.

Reid, who has been a consistent two-figure man for the Farmington Knights throughout the season, hit on a dozen fielders and added seven singles from the line for a game-high 31 points.

Ray, one of the area's biggest men at 6-foot-10, matched Reid's 12 fielders, and hit a perfect three-for-three from the line for 27 points.

The Bengals used a 27-11 second quarter to more than make up for a two-point deficit over the remaining three quarters.

The Bengals have one game left on the regular schedule, at Sikeston Friday night.

With one regular-season game left on the 1974-75 basketball season, and post-season play coming up next week, Cape Central Coach Dan Milligan is "starting over."

"It'll certainly be like starting over," said the veteran head man of the Bengals. "When you lose a player like Stan Ray this late in the season, it's rough."

Ray, the elongated 6-foot-10 senior post man for the Tigers has been declared ineligible, in accordance with the Missouri State High School Athletic Association (MSHSAA) constitution.

The action was taken by Central High School following information received from the MSHSAA office that Ray had competed in an Olympic development league during the past summer in California.

"Since Ray played before the 1974-75 season started, and appeared in all Cape Central games to and including Feb. 21, the school will forfeit all games to that point," said Weldon Hager, director of student activities at Cape Central.

That means that the Tigers, who have won 17 games in 21 starts this year, will go into Sikeston Field House tonight at 0-21, minus the services of Ray, who had been averaging more than 20 points a game.

The action against Ray started last weekend, when an area sportswriter revealed that he had received information of Ray's participation in the California summer league.

Article 5, section 4E(1) of the MSHSAA code book states: "After representing a school in basketball or football, an athlete shall not compete in non-school competition in that sport at any time."

"Stan was aware of this ruling, Milligan told The Missourian today. Before he went to California summer before last, he had asked me about playing in a summer league, and I told him that he couldn't play in any type of summer league."

But, during Ray's visit last summer, he tried out for, and was accepted on a team in the U.S. High School Olympic Development in San Gabriel County.

Dick Marquis, a director of the summer program told Ray at that time and The Missourian in a telephone interview earlier this week, that the program was sanctioned by the National Federation of State High School Athletic Associations.

But, a check by Irvin A. Keller, executive secretary of the MSHSAA with the NFSHSAA, revealed that sanction had not been given to the California league.

"Stan called Coach Pulley (assistant Central Coach Fred Pulley) from California about playing in the league," said Coach Milligan, "and Coach Pulley advised him not to play, but as we understand now, he had already played four games at that time."

"A month ago, the question was raised about Ray's eligibility," Coach Milligan added. "Someone had called me and asked about his playing in California. I asked Stan about it at the time, and he said he didn't feel he had done anything to jeopardize his eligibility."

"We let it go at the time," said Coach Milligan. "Stan knew the eligibility rules, and we felt that he would tell us if he had violated them."

When the Tigers go into Sikeston tonight, Mark Kinder, a 6-foot-4 senior who has been used sparingly this year, will be at the center position, with David Gross and Mark Mitchell up front. Backliners will be Cliff Ford and Joe Bierschwal.

The Cape Central Tigers, without the services of Stan Ray, dropped a 70-66 decision to the Sikeston Bulldogs in their final regular-season contest before the Class 4A regional tournament.

Poplar Bluff defeated Cape Central 59-57 in the regional tournament Thursday night, March 6, 1975 at Houck Field House. Earlier in the day, it was thought that Ray might play, following the filing of a temporary restraining order in West District Federal Court in Kansas City.

Ray ruling to come too late

It may be a moot point now, but a decision will be forthcoming on the eligibility of Stan ("Stretch") Ray, 6-foot-10 Cape Central basketball player who was ruled ineligible by Cape Central High School the final week of the regular season.

The Bengals ended a once-promising basketball season with a 59-57, Class AAAA regional tournament loss Thursday night, its official record 0-23, while school officials and attorneys were hearing arguments in a closed hearing in an attempt to allow Ray to play.

The youth had appealed to federal court Judge Elmo B. Hunter in Kansas City Thursday morning in a last-ditch attempt to get to play in the regional, but Judge Hunter passed the matter to school officials, and they were discussing the issue with attorneys when Poplar Bluff edged Central.

The hearing, closed to newsmen at the request of Ray, came as a result of a petition to federal court, alleging that the determination that he was ineligible was made without his being afforded the opportunity for a hearing. He said his right of due process guaranteed under the 14th Amendment had been violated.

The judge may take up again Monday morning the question of whether Ray was illegally ruled ineligible, under regulations of the Missouri State High School Activities Association. He put off his action with the understanding that Ray, who had been averaging more than 20 points and 15 rebounds a game, would be given a hearing at the school Thursday afternoon.

The school declared him ineligible in late February after learning of the violation, and forfeited the 16 games it had won this season.

Listening to evidence in the hearing Thursday were James Englehart, director of secondary education in the school system; Vince Raddle, director of elementary education, and Eugene Sifford, principal of the school. Present besides Ray and his mother, Mrs. Lois Ray, and attorneys Joe Russell, representing the school, and Edward Calvin, representing Ray, were Weldon Hager, director of student activities at Cape Central, and basketball Coaches Dan Milligan and Fred Pulley.

Although the meeting was closed, it was learned by The Missourian that no decision had been made, and that more information concerning the southern California basketball league would be requested.

Ray maintains that he was misled by the directors of the league, who assured Ray that the league had the sanction of the National Federation of State High School Athletic Associations.

One official of the league told The Missourian that the circuit had the approval of the NFSHSAA, but it was later learned that no such sanction had been given.

Ray was aware of the eligibility requirements of the MSHSAA, which states no basketball player may participate in an organized game at anytime during the year.

"It may take a while before a decision is reached," said one official. "Attorneys are attempting to get more information on the California league."

Although Ray was ruled ineligible for the 1974-75 basketball season, the Missouri State High School Athletic Association allowed Ray's points and rebounds to stay in the school record books. After a lengthy discussion, the Missouri Sportswriters and Sportscasters Association placed Ray on the Class AAAA all-state list.

Stan Ray set a school record of 993 career points which stood until the 1978-79 season when John Heins set the all-time career record with 1,069 points.