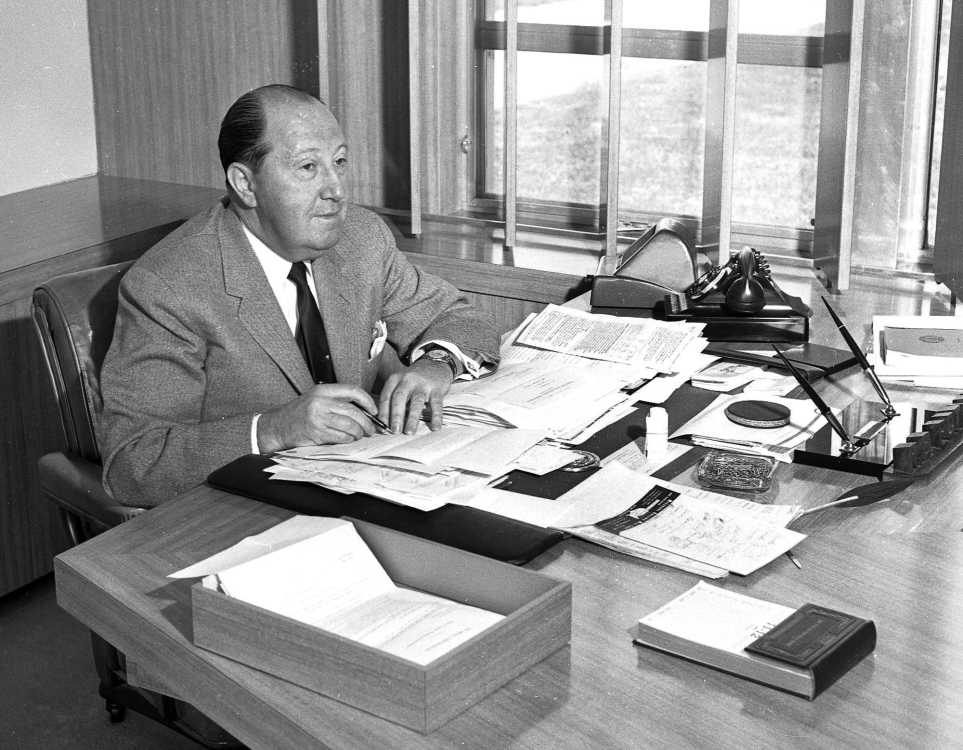 Reginald Basil Potashnick, founder and president of R.B. Potashnick Construction Co., began his construction business in 1926 with three teams of mules, building it into a company once ranked among the largest in the world. The company built several hundred miles of interstate highways, mostly in the Midwest, along with toll roads and thousands of miles of gas and petroleum pipelines, with the company continuing expansion into foreign countries. The company constructed 152 miles of the Alaskan Pipeline. Potashnick died Oct. 26, 1992 in Fort Lauderdale, Florida, where he maintained a residence. He also had a residence in Cape Girardeau, home base of his construction companies. -- Oct. 28, 1992 Southeast Missourian (G.D. Fronabarger photo, undated) 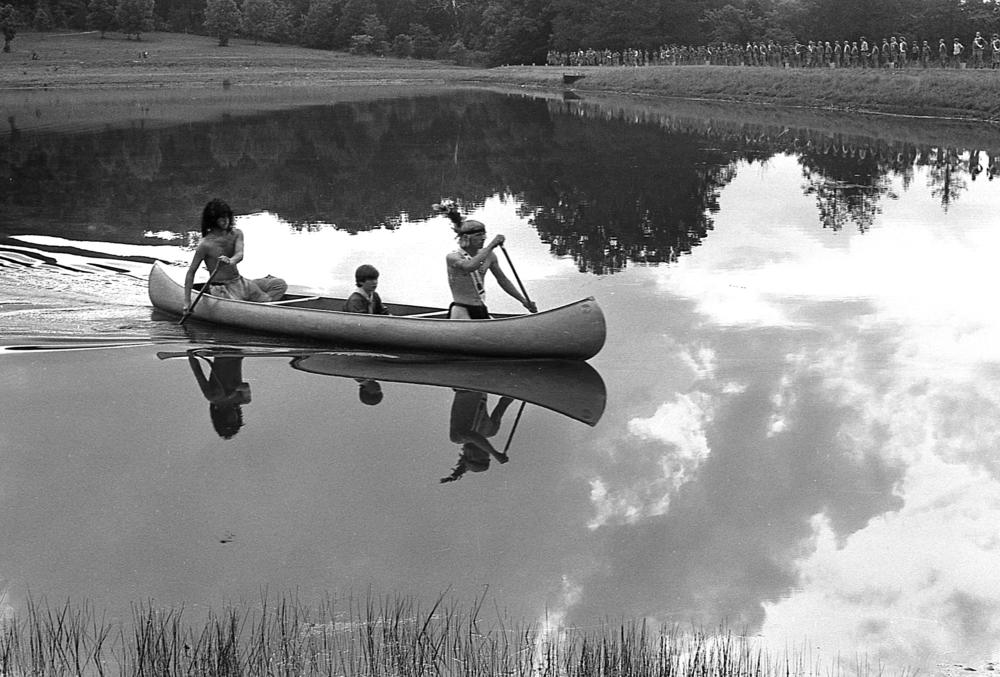 Boy Scouts paddle a canoe across the lake at Camp Lewallen on July 13, 1972, to present a plaque to R.B. Potashnick, builder of the lake. Scouts Gene Hedden of Cape Girardeau and Tom Hooker of Chaffee transport the council's newest scout, Steve Whittaker of Chaffee. (Reginald E. Mitchell photo)

What Southeast Missouri Council Boy Scout officials say was an oversight on their part will be remedied Thursday night when Lake R.B. Potashnick is formally dedicated at Camp Lewallen in Wayne County.

"To be perfectly honest, we felt that Mr. Potashnick deserved more than just a letter thanking him for furnishing the manpower and equipment to build the lake," said Jerry Beckner, executive of the Southeast Missouri Council headquartered here.

In 1966, Mr. Potashnick, president of Potashnick Construction Co., furnished men and equipment to build the seven-acre lake on camp property. It has been in use since 1968 by Scouts from throughout the district. He received a letter of thanks shortly after it opened.

Dr. R.A. Ritter of Cape Girardeau is chairman of the dedication ceremonies that are slated for 6:30 p.m. Also assisting him in the program are T.A. Brown Jr. of Kennett, council president, and Wm. B. Pinnell of Cape Girardeau, council camping chairman.

The lake is used by thousands of Scouts who annually spend two weeks each sumer at the camp, located off Highway 67 just north of Silva. Mr. Beckner said it is being used for canoeing, rowboating, fishing and other nature programs.

Mr. Potashnick will receive a miniature canoe paddle suitably inscribed thanking him for his contribution to the camp, Mr. Beckner said.

Storybook setting for dedication of Lake Potashnick at Lewallen

The sun slowly sinking in the western sky; a clear, mirror lake reflecting sky and shore broken only by ripples of a silent canoe gliding across its surface; a breeze that cooled more than it disturbed the silence of nature, and hundreds of scouts and spectators sitting and standing hushed on the grassy shores set a mood of tranquility and serenity for the dedication of Lake R.B. Potashnick Thursday at Camp Lewallen.

The formal dedication ceremonies were several years late in coming. But no one minded the wait. Neither the crowd, composed of scouts, leaders, parents and friends of Mr. Potashnick who were enjoying the occasion, nor the man who had built the lake, not for recognition but because he has always thought of others...taken time to hear about the needs of his community...and responded with action."

The small talk and laughter stopped as the dedicatory speaker, Dr. Raymond A. Ritter of Cape Girardeau, began his remarks, paying tribute to Mr. Potashnick and speaking of the great contribution the lake has been and will be in the scouting experience of thousands of area boys.

As the tributes continued, a canoe carrying two scouts dressed in Indian wear and a scout in dress uniform silently began approaching from the opposite side of the lake.

The canoe deposited the lone uniformed scout at the bank and returned with its two Indian paddlers across the lake. The young scout, significantly the newest scout in the council--Steve Whittaker of Chaffee Troop 52--presented Mr. Potashnick a miniature inscribed paddle thanking him for the contribution.

The ceremonies ended, 120 scouts who had lined a levee on the lake and parents and friends left for another ceremony--the Order of the Arrow.

The crowd departed, the breeze gone and the sun set, the lake returned to its placid state. But its reflections showed more than the air and trees along the shore. In it could be seen years of usefulness and experience for thousands of scouts who will come to Camp Lewallen each summer and use it for canoeing, fishing, rowboating and other nature programs. 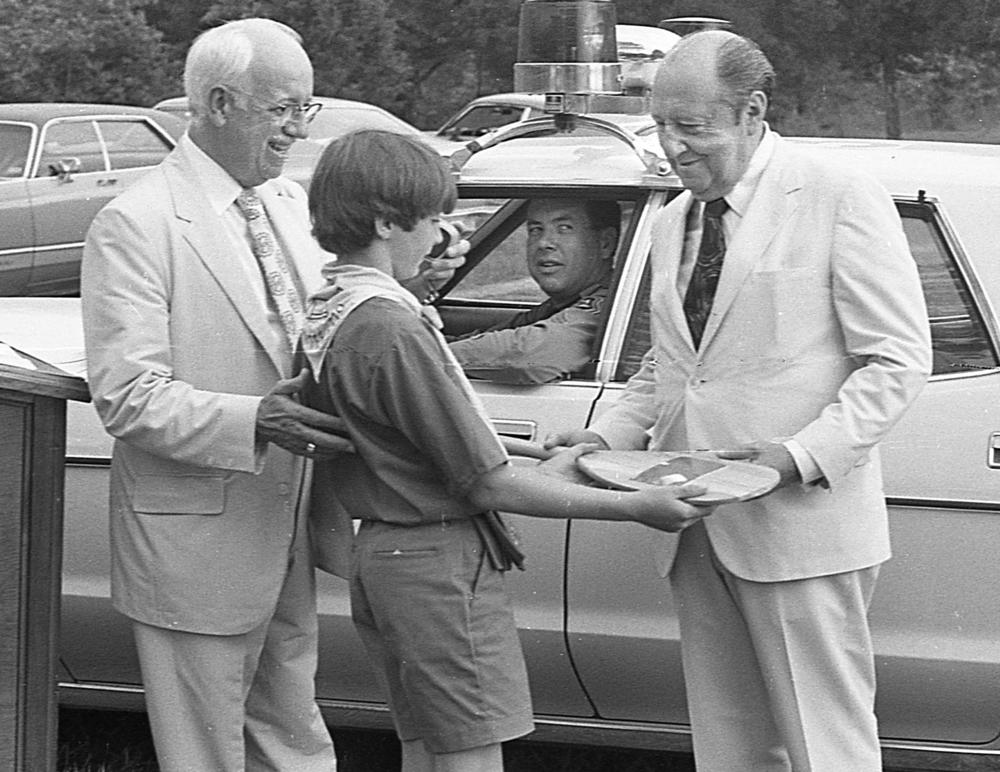 Steve Whittaker of Chaffee presents R.B. Potashnick with an inscribed canoe paddle in appreciation for his contribution of building the lake for Camp Lewallen. Dr. Raymond A. Ritter, left, looks on.